Showing posts from September, 2016
Show all

A Q&A with Love and a Bottle Director Nancy Benjamin 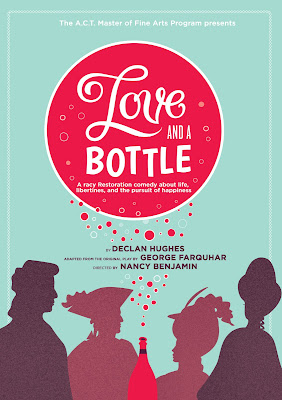 A.C.T.'s M.F.A. Program 2016 Production of Love and a Bottle .  By Stephanie Wilborn Love and a Bottle , the latest production from A.C.T.’s Master of Fine Arts Program, opens on October 5 at The Strand Theater. Stephanie Wilborn, Education & Community Programs Fellow, sat down for a Q&A with director Nancy Benjamin to discuss Declan Hughes’s adaptation of George Farquhar’s 1697 comedy Love and a Bottle and the complexity of directing a play within a play. Why did you choose to direct Love and a Bottle? I saw the play performed in 1992, produced by an Irish company called Rough Magic, a very feminist company. I had never seen this period of theater [late seventeenth century] done in that kind of way. It was fantastic. Do you believe the way women are treated in this play has any relation to the way women are treated today? Farquhar, in his own time, was challenging the story that we tell ourselves that “boys will be boys” and women are property.
Read more By Shannon Stockwell During A.C.T.'s 50th-anniversary season, strong women are navigating their way through traditionally male-oriented spaces. In King Charles III , running through October 9, Kate Middleton tries to establish her place in a kingdom run by men, both in the palace and in parliament. Because of this, critics and audiences alike have compared Kate to Shakespeare's Lady Macbeth. While playwright Mike Bartlett did not actually intend this likeness, the parallels are remarkable. Left: Ellen Terry playing Lady Macbeth. By Window & Grove. Courtesy Wikimedia Commons.  Right: Kate Middleton. By Nick Warner. Courtesy Wikimedia Commons. In Shakespeare’s Macbeth , the titular character receives a prophecy that he will become king. For him to take the throne, however, the current king must die. Lady Macbeth, whom Shakespeare scholar Marjorie Garber calls “the strongest character in the play,” knows that her husband doesn’t have the courage to kill the king, so
Read more 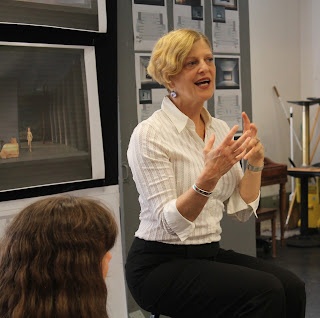 By Elspeth Sweatman A.C.T. Artistic Director Carey Perloff at the first rehearsal for The Hard Problem . Photo by Shannon Stockwell. "It's a fascinating thing to have a long, ongoing relationship with a writer," said A.C.T.'s Artistic Director Carey Perloff at the first rehearsal for Tom Stoppard's The Hard Problem . "What you realize is that everybody has their own life preoccupations, and they make art in order to try and wrestle with them." The Hard Problem is the eleventh Stoppard play Perloff has directed at A.C.T., giving her a unique perspective on this playwright's work. In her view, one of Stoppard's preoccupations is the nature of love. "In Arcadia , he toys with the way in which love is an anarchic emotion that spreads chaos amongst seemingly reasonable people. People don't always act in their own reasonable interests because love enters the universe, and then all hell breaks loose." "In this play, The
Read more 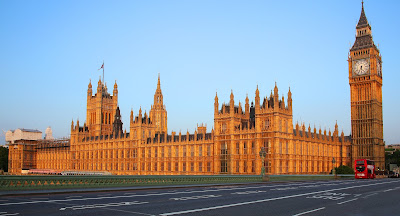 By Shannon Stockwell  King Charles III , opening tonight at The Geary Theater, features a king at loggerheads with his ministers. But when did power shift from the British monarch to his ministers? The Palace of Westminster. By Rennett Stowe.  Courtesy of Wikimedia Commons. It began with George I (1714–27) who relied heavily on his cabinet to help him rule because he did not speak English. After he began to distance himself from his cabinet, he had almost no role in the development of laws. Because George I wasn’t involved in making laws, he couldn’t reasonably be held responsible for the outcomes of those laws. This actually solved one of the fundamental problems of the monarchy: opinions, by their nature, can be wrong, but a monarch was meant to never be wrong. If a monarch had opinions, how could he or she be prevented from making mistakes? The answer was that by disconnecting himself from policy making, George I could never be mistaken; instead, his ministers took respon
Read more

Behind the Scenes at A.C.T.: An Interview with Jack Sharrar, Director of Academic Affairs 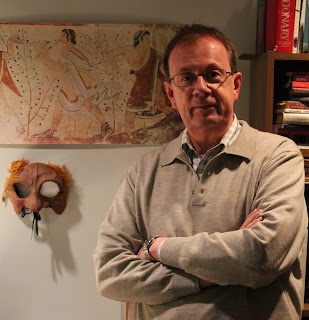 By Elspeth Sweatman Dr. Jack Sharrar. Photo by Elspeth Sweatman. Amid the hustle and bustle of A.C.T.’s Conservatory offices, Dr. Jack Sharrar’s office stands as a beacon of tranquility. From this den of books murmurs the soothing strains of classical string quartets or Brazilian guitar music. We sat down with him at the start of another busy academic year to discuss his role, his favorite productions, and his 27-year relationship with A.C.T. How would you describe your job? I wear a lot of different hats. My title is Director of Academic Affairs. I also serve as a registrar for the M.F.A. Program and the accreditation liaison officer with WASC [Western Association of Schools and Colleges]. And I teach in the M.F.A. Program and the San Francisco Semester. I’ve been here since the summer of 1989. Initially I was working in publications and press, and teaching in the Young Conservatory. Tell us about one of the classes that you teach. I teach “The Glorious Ones” and w
Read more

Tabloids and the British Royal Family 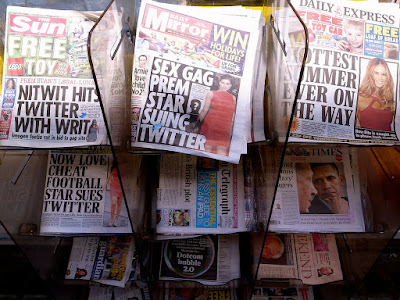 By Simon Hodgson In A.C.T.’s production of King Charles III , beginning tomorrow at The Geary Theater, the British royal family face what some consider their greatest nemesis: the British press. Here is a short history of their fraught relationship. In the 1980s, the UK’s tabloid press was emboldened by its own success. Print runs were up, sex was selling, and the Sun newspaper was flush with the confidence of backing a political winner, after switching sides at the 1979 general election from the Labour Party to support Margaret Thatcher’s Conservative Party. Meanwhile, the royal family, so long considered untouchable, had gradually lost the goodwill it had built up during World War II. The Windsors were now fair game. And with a fresh–faced generation of princes and princesses getting divorced, Fleet Street smacked its lips. British Tabloids. Photo by Graham Holliday, 2011. Courtesy of Flickr. “The royal family’s popularity started to decline,” says King Charles III
Read more 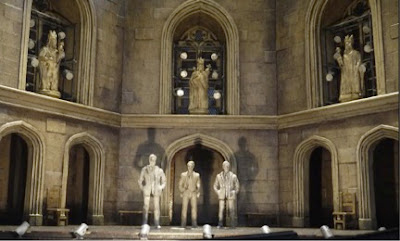 By Simon Hodgson “You can feel it oozing Shakespearean complications," says playwright Mike Bartlett about his play King Charles III , which begins performances at A.C.T.'s Geary Theater on September 14. Over the summer, we caught up with Bartlett to talk about form, pentameter, and King Charles III . Set model, by scenic designer Daniel Ostling, for  A.C.T.'s 2016 production of King Charles III . Photo by Shannon Stockwell. Your play has echoes of several Shakespeare plays. How conscious were you of those resonances, and how deliberately did that influence the language? It was a very conscious decision to write it in a Shakespearean form. The idea that Charles would become king and would refuse to sign a bill into law came at the same time as the idea of writing a Shakespearean–style play. When I started to write it, I mainly had to practice how to write in this form. What I didn’t do was sit down and study my Shakespeare and go through his plays and delibera
Read more 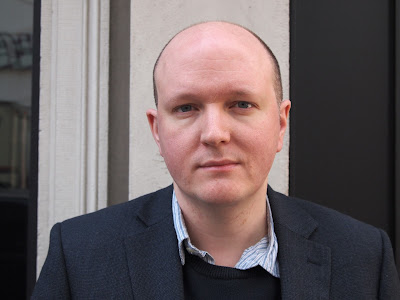 By Simon Hodgson Mike Bartlett, playwright of King Charles III , which opens at A.C.T.’s Geary Theater on September 14, is known for constantly playing with form. His plays Cock and Bull are pieces written for four actors. They are nasty, brutish, and short—crucibles of emotional entanglement, rage, and helplessness. Earthquakes in London , Bartlett’s epic exploration of climate change, features a running time of more than three hours, a scope of five centuries, and a cast of more than 15. King Charles III , meanwhile, takes on the trappings of Elizabethan theater and Shakespearean language to investigate the relationship the British people have with the royal family. King Charles III Playwright Mike Bartlett. When asked what makes a Mike Bartlett play so powerful, King Charles III director David Muse says, “Summing up Mike Bartlett’s work is tricky because the form that his plays take are so incredibly varied. In fact, that’s one of the defining characteristics of his wo
Read more

Which British Royal Are You? 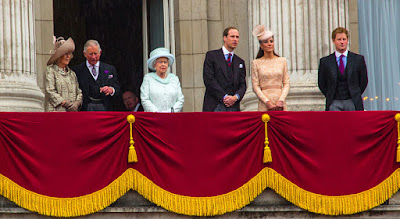 By Publications Staff Before you come see A.C.T.’s production of King Charles III , beginning September 14 at The Geary Theater, meet the members of the British royal family. The British Royal Family, August 2012.  Photo By Ben. Courtesy of Wikimedia Commons. Queen Elizabeth II Britain’s longest reigning queen; she has been ruling steadily for 64 years. She embodies tradition and duty. She is also known for her dry sense of humor. Prince Charles The eldest child of Queen Elizabeth II and Prince Philip, Duke of Edinburgh. A patient yet somewhat eccentric gentleman, he’s been waiting to be king for over 60 years! Camilla, Duchess of Cornwall Wife of Prince Charles. She is more reserved than her husband, rarely giving interviews. Prince William The first child of Charles and Diana, and second in line to the throne. Like his grandmother, he values duty and tradition.   Kate Middleton, Duchess of Cambridge Wife of Prince William. A style icon—when she wears
Read more
More posts