Showing posts from January, 2018
Show all

How Power Works in Pinter's The Birthday Party 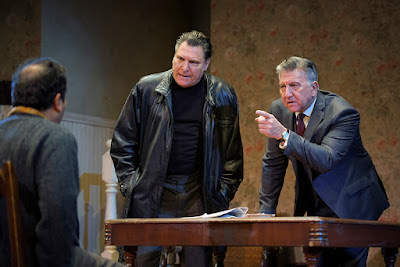 By Michael Paller In Harold Pinter’s The Birthday Party , Goldberg and McCann arrive at an English seaside boardinghouse in search of a third man—Stanley. Who they are, whom they represent, and why they’ve come for Stanley are mysteries. Into this expositional vacuum rush uncertainty and unease. In Act Two, they subject him to a fierce interrogation, including a series of bewildering questions: “What about the Albigensenist heresy?” “Who watered the wicket in Melbourne? “What about the blessed Oliver Plunkett?” What’s the meaning of this? Is it code? The answer lies in how Pinter’s characters get and deploy power. McCann (Marco Barricelli) and Goldberg (Scott Wentworth) confront Stanley (Firdous Bamji)  in A.C.T.'s production of The Birthday Party . Photo by Kevin Berne. Power isn’t always about physical violence: the knock at the door, the punch to the solar plexus. In Pinter’s plays, power is more often psychological, and words are the weapons. As theater critic Michael B
Read more 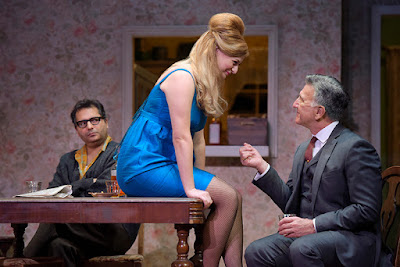 By A.C.T. Publications Staff Why is Pinter significant in Western theater? Pinter’s dramatic storytelling was like a shockwave in Western theater. In the 1950s, British and American theaters were filled with dramas that were conversational, genteel, amusing. Pinter’s forceful rhythms, menace, sexuality, sudden humor, and unanswered questions shook audiences awake. Stanley (Firdous Bamji) watches Goldberg (Scott Wentworth) flirt with Lulu (Julie Adamo) in A.C.T.'s production of  The Birthday Party . Photo by Kevin Berne. Why is power so important in Pinter’s work? Pinter saw drama as a zero-sum game. In every scene, there is a winner and a loser, and the characters onstage know it. This sense of competition—between husband and wife, master and servant, or two hitmen hired to do a job—runs like a spinal cord throughout the playwright’s work. In his own life, the playwright was only too aware of the misuses of power; as a young Jewish man growing up in 1930s London, he’d
Read more 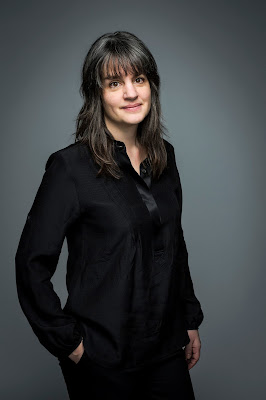 By A.C.T. Publications Staff  A.C.T.’s Next Artistic Director Pam MacKinnon. Photo by Chad Batka. We are thrilled to announce A.C.T.’s next artistic director, Pam MacKinnon. Tony Award and Drama Desk Award winner MacKinnon is no stranger to the Bay Area, having directed Victor Lodato’s 3F, 4F at Magic Theatre in 2005 and Amélie , A New Musical at Berkeley Repertory Theatre in 2015. MacKinnon grew up in Toronto, Canada as well as just outside Buffalo, New York. She majored in economics and political science at the University of Toronto and UC San Diego, and briefly pursued a Ph.D. in political science, before turning to her other passion: theater. Since then, MacKinnon has become one of American theater’s most beloved directors, a supporter of new American playwrights, and a leading interpreter of playwright Edward Albee’s work. She is an alumna of the Drama League, Women’s Project Theater, and Lincoln Center Theater’s Directors Labs. She is also Executive Board President o
Read more 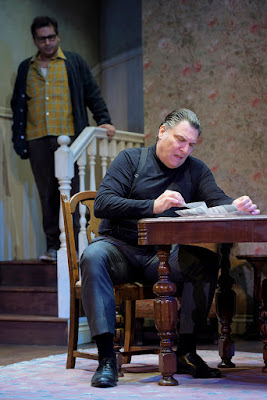 By Elspeth Sweatman Staccato. Threat-filled. Intelligent. Universal. These are just a few of the words that A.C.T. actors Graham Beckel, Anthony Fusco, and Melissa Smith have used to describe Harold Pinter’s work. With the opening of The Birthday Party , we reached out to a fellow veteran of the Geary stage, Marco Barricelli, who plays McCann and previously acted in A.C.T.'s productions of Celebration and The Room (2001), to get an inside perspective on his impressions of and approaches to the playwright’s unique aesthetic.  McCann (Marco Barricelli) tears a newspaper into strips as Stanley (Firdous Bamji) looks on in A.C.T.'s production of The Birthday Party . Photo by Kevin Berne. What first comes to mind when you think of Pinter’s plays? His writing is very self-assured. The remarkable thing to me is that he seemed to hatch that way. With other playwrights, you look back at the beginning of their careers and you can see that there’s talent there, but they need
Read more

Pinterland: The Life and Work of Harold Pinter 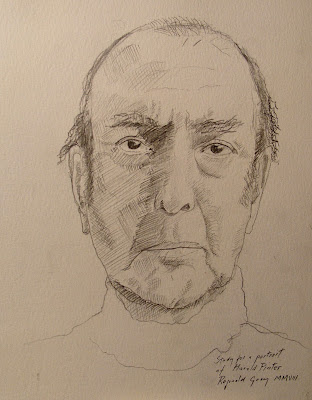 By Elspeth Sweatman Bursting onto the theatrical scene in the 1950s, Pinter radically changed storytelling on the Western stage. In his 29 plays and 23 screenplays, he explored universal themes of loyalty, friendship, memory, communication, and the thin line between the personal and the political, transforming the language of east London into a unique poetry. He “took the narration out of theater,” says American playwright David Mamet, “and put the poetry back.” Study for a portrait of Harold Pinter. Graphite drawing, 2008, by Reginald Gray.  Photo by Reginald Gray. Courtesy Wikimedia Commons.   Pinter was born on October 10, 1930, in Hackney, a working-class suburb in east London. Despite having a large extended family, he was an only child who could often be found daydreaming alone under the backyard lilac tree. This Eden came crashing down in 1939 with the outbreak of World War II. At the age of nine, Pinter found himself on a train to rural Cornwall with other
Read more

Like Staging a Boxing Match: An Interview with Birthday Party Director Carey Perloff 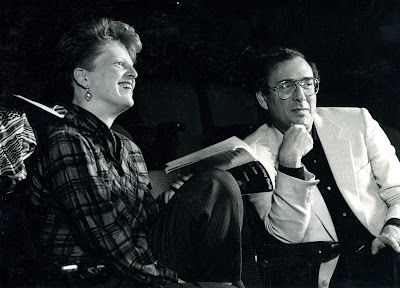 By Simon Hodgson In 1987, Carey Perloff wrote to Harold Pinter to gain the rights to  The Birthday Party  for Classic Stage Company. The odds were against the 28-year-old director. Pinter was unhappy about American productions of his plays that were overly psychological. “Americans tend to do dramaturgy that’s confessional,” says Perloff. “If you tell the truth, you absolve yourself. But the British don’t tend to tell people what they think. For them, language is a smokescreen.” Perloff’s persistence earned her not only the rights to the play, but the beginning of a collaboration with Pinter that would span 20 years. As Perloff returns to  The Birthday Party  for the first time since the ’80s, she spoke about the play and her long partnership with Pinter and his work. Director Carey Perloff and playwright Harold Pinter during rehearsals  at Classic Stage Company in 1989. Photo by Tom Chargin.   Why do you keep coming back to Pinter? There’s nothing better
Read more

A Smile and a Mission: A Q&A with Dear Dad's Louie Anderson 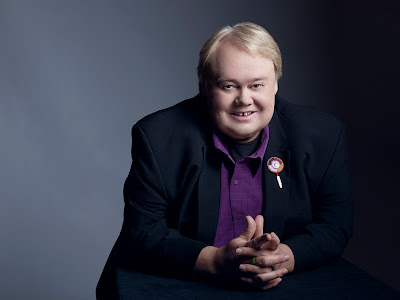 By Simon Hodgson In the early ’80s, stand-up comedian Louie Anderson took a friend to the graveyard in Duluth, Minnesota. The man wanted to read a letter to his late father, a man with whom he’d experienced a challenging relationship all his life. “When my friend came back to the car,” Anderson says, “he looked different—lighter. I thought: I’m gonna have to do that someday.” The Minnesota-born comedian was already a star, known both for his stand-up and his scene-stealing appearances in ’80s classics such as Ferris Bueller’s Day Off and Coming to America . Anderson went back to comedy, but he didn’t forget the experience in Duluth and, later in the decade, he started writing his own letter. We caught up with the Emmy Award–winning personality before he brings his one-man show, Dear Dad , to The Strand next week. Comedian Louie Anderson. Photo courtesy of Louie Anderson. How did Dear Dad start out? Originally this started out as a celebrity autobiography. But in the mi
Read more 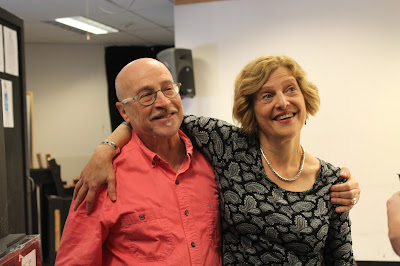 By Taylor Steinbeck For A.C.T. Artistic Director Carey Perloff, directing a Pinter play is a labor of love. Having directed  The Birthday Party  twice before at Classic Stage Company (CSC) in 1988 and 1989 as well as several of his works here at A.C.T. ( Old Times  [1998],  Celebration  [2001],  The Room  [2001],  The Homecoming  [2011]), Perloff knows the playwright’s writing intimately. At the first rehearsal of Perloff’s final directing job as A.C.T.’s artistic director, she introduced colleagues, actors, and staff members to her vision for  The Birthday Party,  and discussed why she is returning to this darkly comedic play. A.C.T. Dramaurg Michael Paller and director Carey Perloff at the first rehearsal for The Birthday Party . Perloff’s relationship with Pinter runs deeper than her knowledge of his canon—the two worked closely when she was staging The Birthday Party for its reprisal at CSC, and remained friends and collaborators until his death in 2008. The lessons sh
Read more
More posts