Showing posts from January, 2019
Show all

Learning from the Inside Out: Hear from the 2018–19 Fellows

By Annie Sears Every year, each department here at A.C.T. welcomes a Fellow for the season, providing mentorship to young professionals as they transition into the theater industry. For ten months, we Fellows are immersed in the world of San Francisco’s premier regional theater, learning how a nonprofit runs from the inside out. Some of us are on our feet in the rehearsal room, and others are writing for Words on Plays . Some are working with local youth in classrooms, and others are working with needle and thread in our costume shop. Within our respective fields, we’ve been growing both personally and professionally, acquiring all sorts of random and useful skills. Here’s an authentic peek into what we’re learning here at A.C.T. Some of the 2018–19 Fellows decorating The Geary before A Christmas Carol . Photo by Amy Dalba. Hannah Clague , Education and Community Programs Fellow : I learned when to wear sneakers to work (when you’re rolling around of the floor teaching a g
Read more

The Art of Producing: A Conversation with Tom Ross 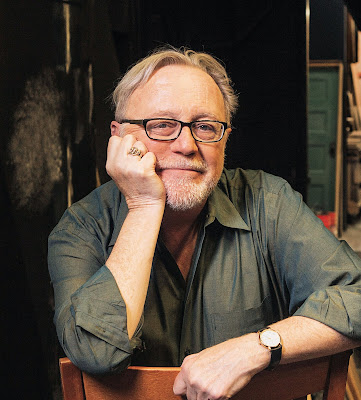 By Mark Jackson Did you know that you can take classes here at A.C.T.? Whether you’re already working in the theater industry, hoping to get your foot in the door, or simply want to stretch your creative muscles, we have a Studio A.C.T. class that will pique your interest. Our winter session is underway, but it’s not too late to register for a special master class—Zen and the Art of Producing, Directing, and Artistic Directing—with Tom Ross, artistic director of Aurora Theater Company. Ross first learned about producing from Joseph Papp, the great impresario of New York’s Public Theater, where Ross produced his first two shows. For the past 27 years, Ross has been growing Aurora Theatre Company—initially as its managing director, then for the past 15 years as artistic director. He’s also produced the legendary Solo Mio Festival. I recently sat down with Ross to hear more about his philosophy of producing. Tom Ross, artistic director of Aurora Theater Company. Photo
Read more

Learning What Living Was All About 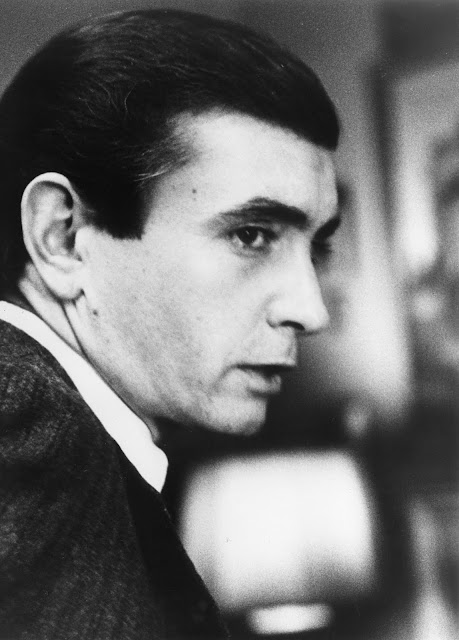 By Elspeth Sweatman Born on March 12, 1928, and adopted by Reed A. and Frances C. Albee—two members of the elite in Larchmont, New York—Edward Franklin Albee III had a coddled but lonely childhood. His parents bought him everything he could have ever wanted: Grenadier Guard toy soldiers, electric trains, a smoking jacket. He went to see Broadway shows and spent the winter months in Palm Beach, Florida. But material possessions and a lavish lifestyle could not hide the fact that his parents were unloving. “Whenever his mother became angry with him, she reminded him that he was adopted,” says biographer Mel Gussow. “The inference was in the air that, if he did not behave, if he did not measure up, he could be returned to the orphanage, like an unwanted possession.” Edward Albee in 1971. Photo courtesy Cleveland State University. From an early age, Albee knew he wanted to be a writer. He began drafting poems at six, plays at 12, and novels in his teens. Albee’s dedication to his
Read more

Three (and a Half) Pulitzer Prizes 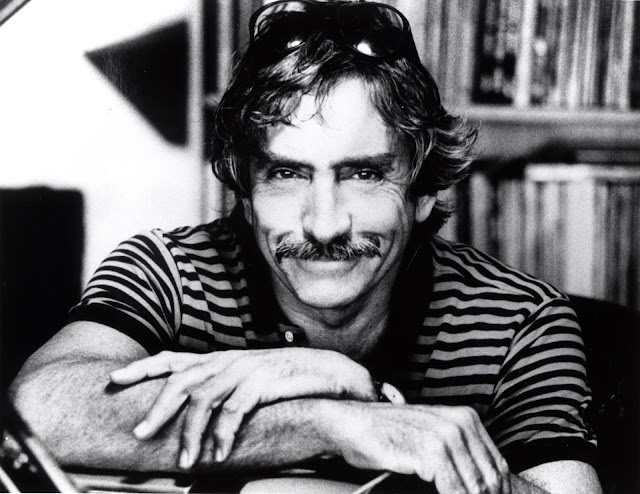 By Elspeth Sweatman “You either affect people or you leave them indifferent,” said playwright Edward Albee (1928–2016). “And I would loathe to leave an audience indifferent. I don’t care whether they like or hate, so long as they’re not indifferent.” They weren’t. Albee’s unique, provocative brand of truth-telling did not always sit well with audiences and critics, but it secured his place in the American theatrical pantheon. In fact, Albee earned three—or as he was fond of saying, three and a half —Pulitzer Prizes for Drama. Playwright Edward Albee. Photo courtesy University of Houston Photographs Collection. 1963: Who’s Afraid of Virginia Woolf? Albee made a splash with his first full-length play, Who’s Afraid of Virginia Woolf?, and its iconic, warring couple: George and Martha. Showing off Albee’s wit and bite, the games that George and Martha play to entertain their guests are amusing at first, but we quickly see that they are designed to put everyone on edge, incl
Read more 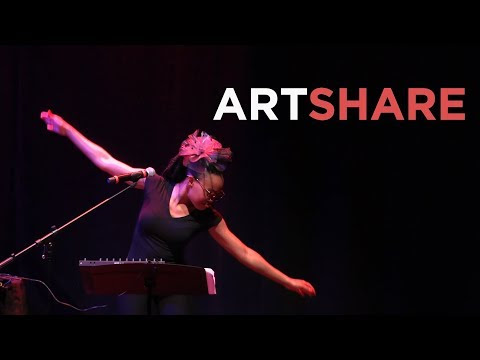 By Annie Sears Part of the beauty of live theater is that it happens in real time and real space, drawing a community to sit next to one another, breathe the same air, and feed off each other’s energy. To access this sort of togetherness, performers need a performance space. Are you a Bay Area artist whose project could take flight if you only had space? Learn more about ArtShare, A.C.T.’s community space-sharing initiative, and hear from Literary Manager & Associate Artistic Director Allie Moss. The application deadline is January 31.
Read more 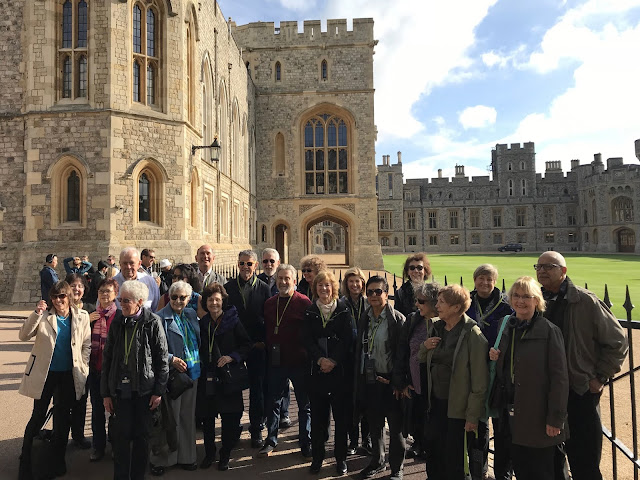 By A.C.T. Publications Staff A.C.T.'s London theater tour members enjoy a visit to Windsor Castle. As the applause settled at the final curtain of The Band’s Visit in June 2018, the Broadway audience members started to file out. But for the members of A.C.T.’s New York City tour, the real show was only just beginning. Heading to the front row, A.C.T.’s touring theater lovers spoke with actors from The Band’s Visit , the cast which had swept the board at the Tony Awards the night before. “It was very exciting,” says tour member Milton Mosk, “Those are things you don’t ordinarily get to experience.” As well as seeing incredible productions, A.C.T.’s theater tours to New York, London, and Ashland, Oregon are packed with unique aspects like this talkback. During the Oregon Shakespeare Festival (OSF) tour this past July, guests spoke with Tatiana Wechsler, the lead actor in Oklahoma , as well as OSF Producer Mica Cole. “To have that intense experience,” says longtime A.C.T. s
Read more

Of Special Guests and Animal Instinct: A Non–Human Interest Story

By Kayla Minton Kaufman Gato prowls around William Ball Studio during Seascape rehearsals. Photo by Beryl Baker. The cast of Edward Albee’s Seascape slowly filters in to A.C.T.’s William Ball Studio as the morning sun starts to warm the space. Cups of coffee or tea from the green room in hand, their hellos and good mornings fill the room as pages of the script turn for last minute review. All of this is classic rehearsal room sights and sounds—until the elevator dings, and a meow emerges from the lobby. Enter award-winning playwright Winter Miller, who is shadowing our Seascape rehearsal process from first read to opening night. She rocks a front-wearing, kangaroo-style backpack. Nestled inside is the star of our rehearsal room: her cat, Gato. For a production where tuning into animal instinct is key, having this creature prowling around is surprisingly valuable. “It’s such a collaborative room, it makes sense to draw inspiration from a cat,” says Sarah Nina Hayon, who plays
Read more 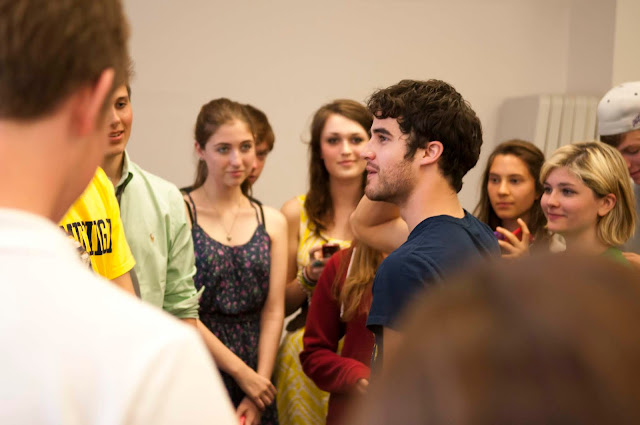 By Annie Sears YC alum Darren Criss speaks to other YC students. Photo by Ryan Montgomery. A.C.T. congratulates all the artists recognized in the 76th Golden Globes, particularly Darren Criss, who trained in our Young Conservatory. For his work on FX’s The Assassination of Gianni Versace: American Crime Story , Criss took home the award for Best Performance by an Actor in a Limited Series or a Motion Picture Made for Television. Many of our alums are working on creative projects all over the world, and several have exciting projects coming up soon. Onscreen Disney Channel recently picked up Just Roll With It , starring Tobie Windham (M.F.A. ’10). The show is a hybrid of scripted and improvisational comedy. The four actors begin performing a pre-written scene, but they’ll be interrupted by a ridiculous stunt of the audience’s choosing. Then, the actors will just have to roll with it. TBS just cast Christina Elmore (M.F.A. ’12) as a co-lead in pilot of their new comedy Twentie
Read more

Getting Personal with Pam MacKinnon and Seascape 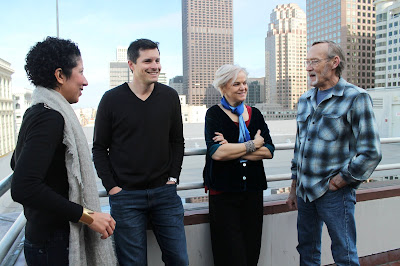 By A.C.T. Publications Staff “ Sweat was political,” says A.C.T. Artistic Director Pam MacKinnon, “ Men on Boats was playful, now we’re going personal with Seascape .” As MacKinnon prepared for her Geary debut, she spoke with cast, creatives, producers, and A.C.T. staff about Edward Albee's Seascape and was both optimistic and reflective. Sarah Nina Hayon, Seann Gallagher, Ellen MacLaughlin, and James Carpenter—the cast of Edward Albee's Seascape , directed by Pam MacKinnon. “The Albee project is very dear to me,” said MacKinnon. The director was a thirtysomething theater-maker in New York when she first spoke with Albee about directing The Play About the Baby at Philadelphia Theatre Company. That production in 2002 was the first of many— Seascape will be her 11th production of an Albee play. MacKinnon has become the foremost contemporary interpreter of the great American playwright’s work, winning a Tony Award for her direction of Who's Afraid of Virginia
Read more
More posts