Showing posts from 2021
Show all

Five Tips for Your Vocal Routine 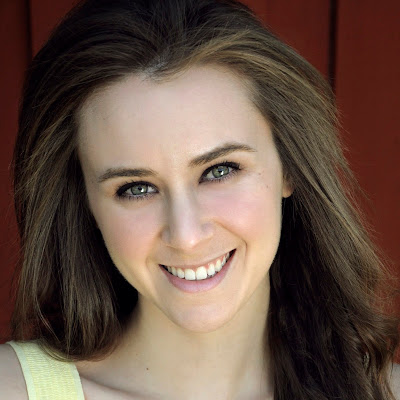 by A.C.T. Staff An actor’s voice is one of the most important tools in their toolbox. Below, voice teacher and instructor in A.C.T.’s San Francisco Semester Jessica Berman shares five tips for taking care of your vocal instrument.  Jessica Berman 1. Focus on posture and alignment, especially when speaking online. Hopefully the days of spending hours on Zoom will soon be behind us, but in the meantime, if you find that your voice feels fatigued after long stretches of vocal use online, take a moment every 30–60 minutes to do a little physical reset. You can: Drop down your spine so that your whole upper body is hanging from your tailbone (you can do this seated or in standing) Shake out your shoulders Gently roll your head and neck around Give your arms and legs a little pat and notice the sensations that you feel in your body As Kristin Linklater says in her book Freeing the Natural Voice , “The efficiency of the vocal apparatus depends on the alignment and posture of the body and the
Read more 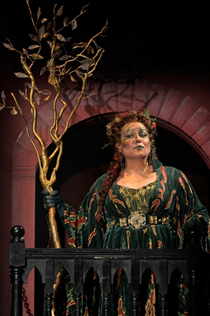 by A.C.T. Staff 1. They both know how to work a head-to-toe look. A.C.T.'s  A Christmas Carol Its dark brown curls were long and free; free as its genial face, its sparkling eye, its open hand, its cheery voice, its unconstrained demeanor, and its joyful air . . . “You have never seen the like of me before!” exclaimed the Spirit. —Charles Dickens,  A Christmas Carol A.C.T.'s  The Matchmaker   MRS. LEVI: I’ve seen the workroom a hundred times. I’ll stay right here and try on some of these hats. —Thornton Wilder, The Matchmaker   2. They both believe that a well-laid table can work magic. A scene from A.C.T.'s A Christmas Carol   MRS. LEVI: I’m the best cook in the world myself, and I know what’s good. —Thornton Wilder, The Matchmaker   3. Pretty much everything would be better if we all followed their advice. This boy is Ignorance. This girl is Want. Beware them both, and all of their degree, but most of all beware this boy, for on his brow I see that wri
Read more

From Stage to Screen—Tips to Remember for On-Camera Acting 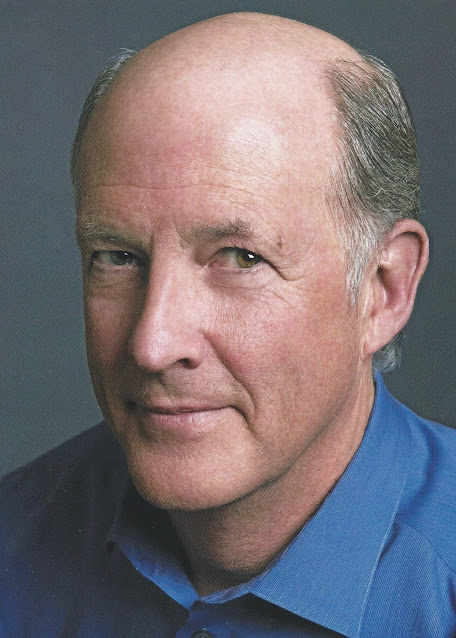 by A.C.T. Conservatory Staff At the A.C.T. Conservatory, we seek to develop the artist in every actor and prepare them to succeed in all aspects of the profession, including acting in film and on television. Whether on stage or screen, acting is about conveying the emotional truth of the character, but the change in medium requires some adjustments. Below, actor Warren David Keith—who also directs and teaches at A.C.T.’s Summer Training Congress—shares some tips for stage actors looking to translate their skills on camera. Warren David Keith 1) The distance of communication has changed. The back row of the theater may be 20 feet or hundreds of feet. It might be the Aurora or the second balcony of the Geary Theater, but that is the distance that the theater actor must bridge. On film it is only the distance to the lens and to the microphone. 2) Performance and experience. In the theater you must render a performance in order to be seen and heard in the furthest seat. The camera detects
Read more

To Inspire, Lift, and Liberate—the Enduring Vision of Alice Childress 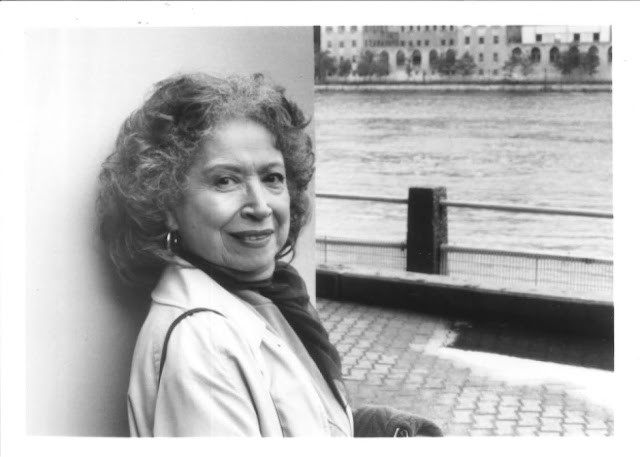 By Arminda Thomas   Announcing her death in 1994, the New York Times headline read, “Alice Childress, 77, a Novelist,” though the full obituary allowed that she also wrote some plays. While Childress would likely have objected to that order, having devoted the bulk of her life to playwriting, the paper of record’s choice is understandable. As a playwright, Childress’s story is more difficult to measure: hers was a progressive voice too often hemmed in by anxious, benighted producers; a mainstage talent shoehorned into black box realities. Alice Childress. Photo courtesy of Arminda Thomas. The story began, promisingly enough, at a little Harlem theater with a big mission, the American Negro Theatre—a company so hardworking members called themselves the ANTs, and were expected to function as actors, directors, designers, and box office managers. "The American Negro Theatre Company," Childress recalled, "worked ten years without salary, four nights per week, keeping the sa
Read more

For the Heart of Frisco—Downtown High School Exhibition Goes Viral 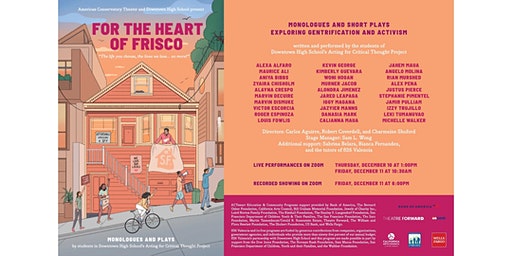 By Livian Yeh   On December 10 and 11, 2020, students from San Francisco’s Downtown High School performed an hour-long exhibition of original works, created with their teachers Charmaine Shuford and Robert Coverdell, A.C.T. teaching artist Carlos Aguirre, with classroom support from Sabrina Belara and Bianca Fernandez, and in collaboration with the writing staff and tutors from 826 Valencia.  The performance, titled For the Heart of Frisco , was the final presentation of the Acting for Critical Transformations Project at Downtown High School. Students wrote, directed, and acted in monologues and short plays about gentrification and activism in the city. In Eulogy to San Francisco , the class held a candlelight vigil for their city, which has long ceased to be affordable and equitable. This Trend Cannot Continue focused on painful truths about the cost of living here: the rent has gone up $2,400 in 24 years, and landlords raise the rent by 2.6% every year. In Kimberly’s Play , a group
Read more
More posts