Showing posts from September, 2018
Show all

Insight into Sweat: Boom and Bust in the Rust Belt 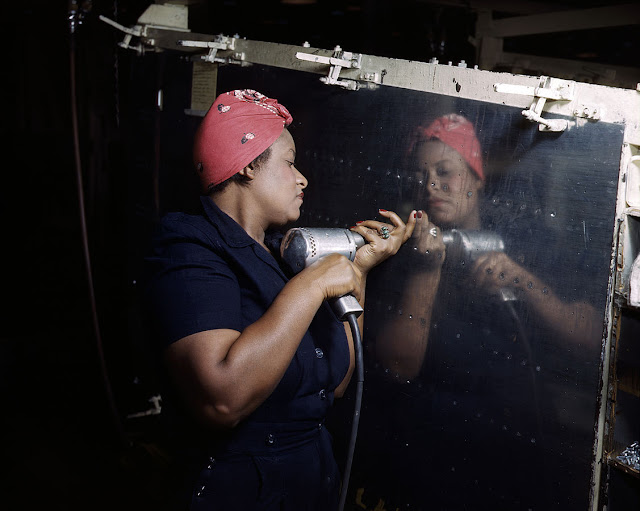 By Simon Hodgson "Rosie the Riveter" working on an A-31 dive bomber, Tennessee, 1943. Photo by US Office of War Information photographer Alfred T. Palmer. Courtesy Library of Congress. Geology was destiny for 19th-century Pennsylvania. In the 1860s, when the process of making steel out of iron ore, coal, and limestone was refined, the state had all of the raw materials necessary for the production of steel at scale. Combining minerals, river transport links, manufacturing experience, and access to Pittsburgh investment, Pennsylvania was poised to create the metal of the future. As the United States rebuilt infrastructure shattered by the Civil War, steel companies across Pennsylvania grew into major national corporations. The greatest, U.S. Steel, was formed in 1901 by a merger between three companies. Aided by favorable government oversight in the 1920s and fueled by military contracts during World Wars I and II, it became a virtual monopoly. By 19
Read more

Insight into Sweat: An Interview with Director Loretta Greco 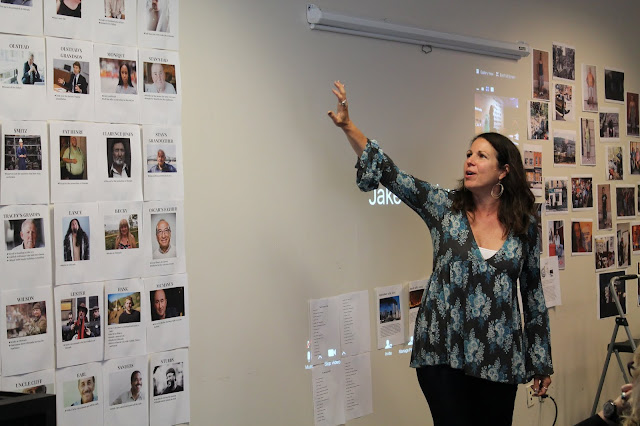 By Elspeth Sweatman Director Loretta Greco explains the design team's vision at the Sweat Meet and Greet. When A.C.T.’s new artistic director Pam MacKinnon asked Loretta Greco—artistic director of the Magic Theatre—to direct playwright Lynn Nottage’s Sweat , Greco immediately said yes. She felt the power of the Pulitzer Prize–winning drama when it premiered at the Oregon Shakespeare Festival in 2015, and knew she wanted to explore it further. We sat down with Greco as design plans were being finalized to discover what it is about Nottage’s work and The Geary Theater that excites her. Sweat will be your fifth play for the Geary stage. What ’s special about this space? The thing about The Geary is there are plays where you want to take advantage of the pomp and circumstance, and then there are plays where you need the immediacy. Sweat requires immediacy. The characters are a family, and that bar is like their living room. We want to extend that so the audience feels that
Read more 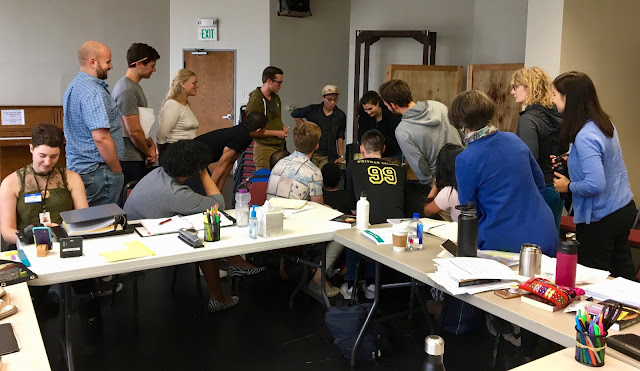 By Annie Sears The cast and crew of Three Sisters gather around the scenic model before beginning their first read-through. Photo by Annie Sears. Russian playwright Anton Chekhov (1860–1904) is one of the most well-known theater-makers of all time—from The Seagull (1896) to The Cherry Orchard (1904) to Three Sisters (1901), which our third-year M.F.A. students will perform next week. Rehearsals began three weeks ago, but their excitement was sparked long before that. Our M.F.A. students have a special history with this play, and their history with each other makes it the perfect selection. Students first tasted Chekhov’s complexity their first year. In a course with former Head of Voice Jeff Crockett, they explored several Chekhov plays, but Three Sisters was their favorite. “There's something about this particular mixture of loneliness, desire, and humor—iconic traits in all of Chekhov's work—that resonated with my class,” says Caleb Lewis. “So over the last two ye
Read more

Insight into Sweat: The Dramatic Appeal of Bars 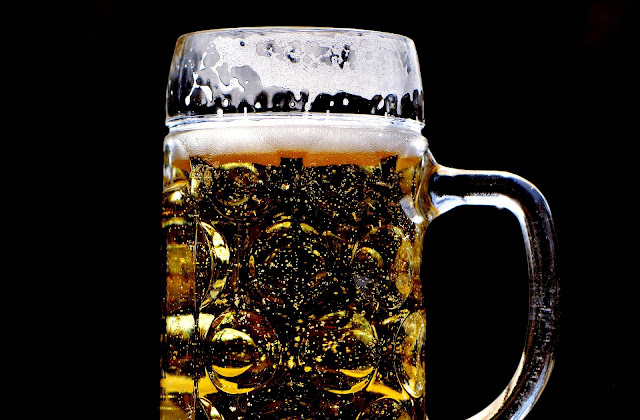 By Elspeth Sweatman A mug of beer. Photo courtesy Max Pixel. Whether writing a slapstick comedy, a sci-fi action flick, or a tense family drama, writers for both stage and screen have been drawn to bars. The bar in Lynn Nottage’s Sweat (which starts previews at The Geary on September 26) is an excellent example. Most of the play takes place in a bar; it’s where mill workers spend their time between shifts. So why would Nottage—and so many other storytellers—choose this setting? What does the presence of alcohol add dramaturgically to a story? Often nicknamed the truth-telling serum, alcohol affects the brain’s prefrontal cortex, where rational thought and decision-making occur. For storytellers, this creates moments of incredible humor—take actors Stockard Channing, Sandra Bullock, Nicole Kidman, and Dianne Wiest howling with laughter and calling each other “witch” after downing too many midnight margaritas in the film Practical Magic (1998)—but also moments of unforgettable
Read more

Upcoming M.F.A. Season: A Breadth of Genres, Styles, and Cultures 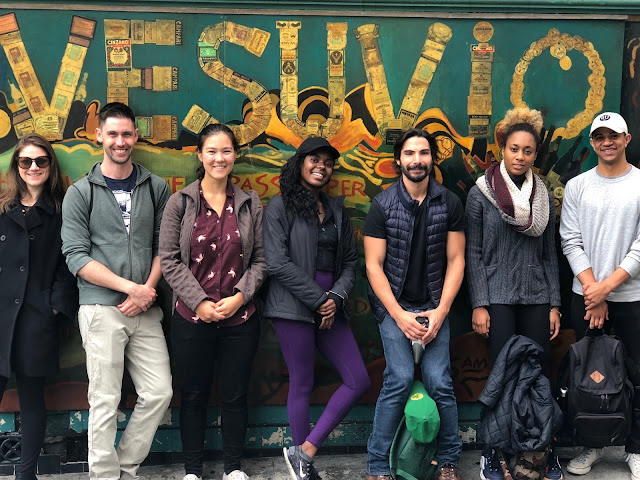 By Annie Sears First, second, and third–year M.F.A. students get to know each other at the kick-off of the 2018–19 year. Our M.F.A. students joined us at 30 Grant three weeks ago, and they've already hit the ground running on their upcoming season. From tragedies to comedies, from classics to new works, from Russia to the woods outside ancient Athens, students will explore a wide variety of genres, styles, and cultures. “It is a panoply of theater that will challenge and grow the students in each year of the program,” says Conservatory Director Melissa Smith. “We are especially pleased to have a lineup of five accomplished and innovative directors—all of whom identify as women, artists of color, or both—working with our students.” M.F.A. students are equally thrilled by the season’s leadership. “It’s always great to collaborate with new artists who bring freshness to your work,” says third-year M.F.A. student William Hoeschler. “That’s why Lavina Jadhwani, Mina Mo
Read more

Behind the Scenes at A.C.T.: An Interview with Usher Joe Mac

By Annie Sears Joe Mac strikes his signature "Joe Mac Action Figure" poses in the Geary lobby. Photos by Annie Sears. Joe Mac came to the Bay Area on a spur-of-the-moment road trip. It was 1978, and Joe had just completed undergrad in his home state of Pennsylvania when a friend called and said, “Pull $200 together. We’re going to Santa Cruz.” So Joe, who had never been west of the Mississippi River, spent two weeks sleeping in the back of a Volkswagen with his friend and a husky. When he first glimpsed the Pacific, Joe said, “I’m not going back. I’m starting my life here.” And he did. For 40 years, Joe has been active in the Bay Area theater community. A member of the Actors’ Equity Association, Joe’s performed on several regional stages. He’s also house-managed at Beach Blanket Babylon and 42nd Street Moon. Most notably, he was the managing director and producing associate at Marines’ Memorial Theatre for 18 years. Now—in addition to decorating local bars and manning
Read more

Insight into Sweat: Camaraderie in a Company Town 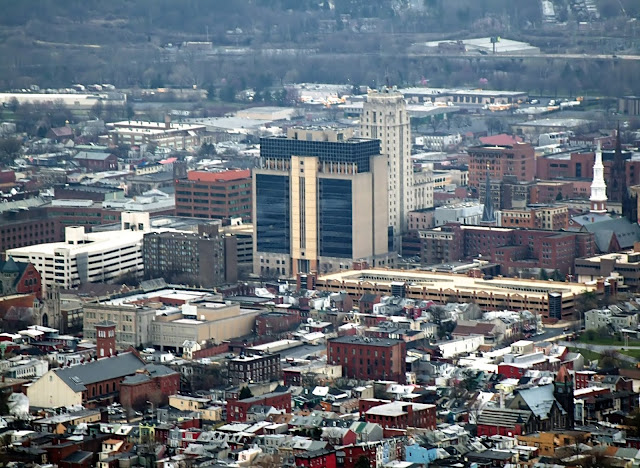 By Elspeth Sweatman   Downtown Reading, Berks County, Pennsylvania, April 2011. Photo by Nicholas A. Tonelli. Courtesy Flickr.   Lynn Nottage’s Sweat is set in the nonfictional town of Reading, Pennsylvania, a town built around a single steel company. These tight-knit communities have a distinct rhythm. Dominated by one industry, their days are punctuated by shift bells and post-work drinks, and their years by the economic wheel of fortune: prosperity followed by layoffs, strikes by compromises. From this rhythm comes a unique psychology that pervades the community, impacting the lives of mill workers and non-mill workers alike. Every business and every resident has some connection to the industry. Everyone is part of the cycle of boom, bust, and boom again. It is this aspect that has made the mill closures in America’s Rust Belt over the past three decades so devastating. Riveting, jacking, stoking, drilling: these are danger
Read more

Starting to Sweat for Sweat: Cast and Crew Begin the Process with a Meet and Greet 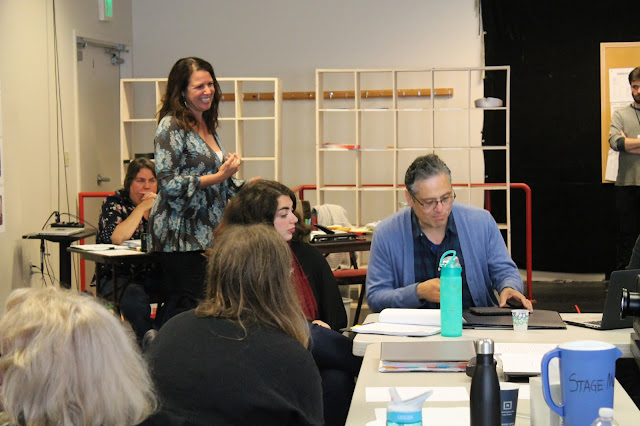 By A.C.T. Publications Staff Director Loretta Greco explains her vision at the meet and greet for Sweat . Behind her is Elisa Guthertz (stage manager), in front are Karina Fox (assistant director) and Ulises Alcala (costume designer). Photo by Elspeth Sweatman. Last Monday, A.C.T. took an exciting first step for the first production of our 2018–19 season: the meet and greet for Sweat . For the first time, the cast, director, and creative team gathered in the same room to celebrate the work about to begin. Artistic Director Pam MacKinnon and Director Loretta Greco articulated their vision for the script, and designers explained their plan to manifest that onstage. Set in Reading, Pennsylvania, Sweat depicts the unraveling of a small-town community built around a single steel company. In the wake of the 2008 depression, many steelworkers were laid off, and the effects were devastating on both a corporate and a human level. “The play asks how a small American city can go from be
Read more
More posts