Showing posts from May, 2019
Show all

On to the Next Stage of Life 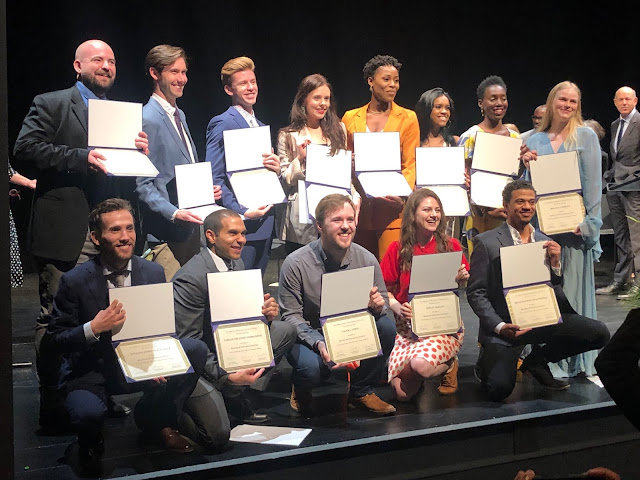 By Annie Sears The end of a schoolyear often brings a medley of emotions, a peculiar blend of nostalgia and the energizing promise of what’s to come. This is certainly true for the A.C.T. community as we say goodbye to the 13 members of our M.F.A. class of 2019. For the last three years, these citizen artists have enriched Bay Area theater with their desire to learn and their joy in the creative process. So where are these recent graduates headed? The M.F.A. class of 2019. Photo by Miranda Ashland. Göran Norquist isn’t leaving—at least for a month. He’s on A.C.T.’s mainstage as Marcel in Eugène Ionesco’s Rhinoceros , playing through June 23 at The Geary. Several other classmates are also staying in the Bay. Caleb Lewis is getting married here next week. He’s a twin, and his fraternal twin is also getting married this summer. “But to be clear,” joked Lewis, “I asked my fiancé first, and we’re getting married first too!” Jerrie R. Johnson will star in her one-woman show A Cro
Read more

Join the Crash, Embrace the Herd 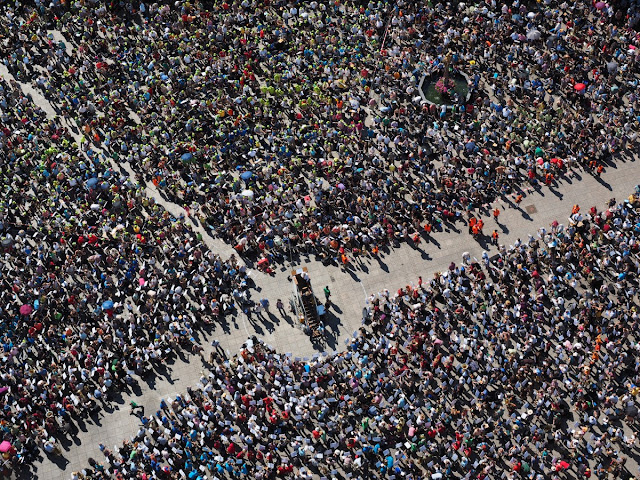 By Elspeth Sweatman A crowd. Photo courtesy Pxhere.   Like it or not, humans are herd animals. From the moment we are born, we crave interaction, communication, affection. To achieve these needs, we accept rules and traditions that help us to fit in, get along, and stay safe. Yet, we also know how dangerous going along with the group can be. Our news reels and Netflix queues are full of examples of innocent bystanders being duped, injured, or killed because they followed others. How can herd mentality be both the bedrock of our civilization and its undoing? There are two types of herding: self-interested (when we copy the motivations and actions of others for our own gain) and collective (when we imitate others for the advantage of the entire group). When we go to a Giants baseball game at Oracle Park and follow the crowd to the entrance, that’s self-interested herding; we assume people know where they are going. When we stand on the right-hand side of escalators to let others
Read more

Rhinos Roaming Through Our Psychological Savannas 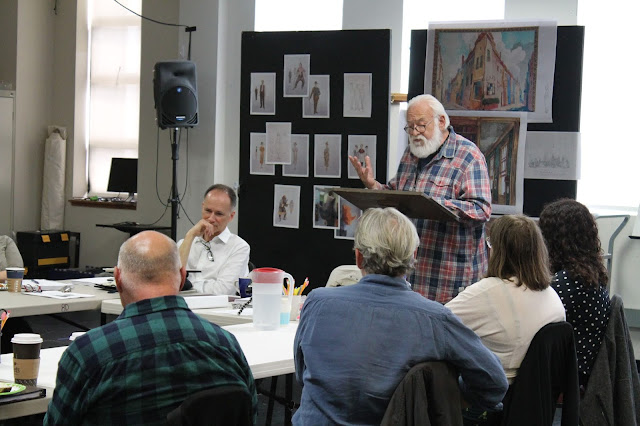 By Annie Sears At the first rehearsal for Rhinoceros , director Frank Galati reminded the cast, crew, and A.C.T. staff that during the 1930s and ’40s, playwright Eugène Ionesco watched his friends succumb to popular political beliefs. In his memoir, Ionesco recalls chatting with his friends—university professors, students, journalists, critics, and other intellectuals—to dismantle fascist propaganda. All but three of those friends eventually changed their allegiance, even those who had claimed to be fascism's firmest opponents. To Ionesco, these friends were “pseudo-intellectuals” because they didn’t truly think; instead, they regurgitated predominant systems of thought. “They were caught in the mechanism,” wrote Ionesco. “They accepted everything. They became rhinoceroses.” Director Frank Galati addresses the cast and crew of Rhinoceros at the first rehearsal. Photo by Elspeth Sweatman. Absurdist theater artists such as Ionesco believed that fascist ideologies were
Read more 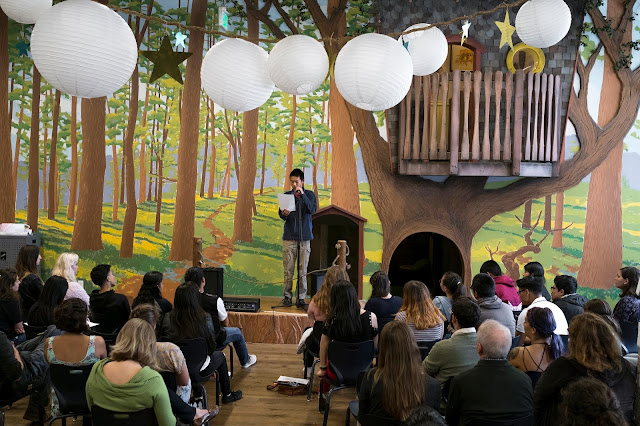 By Annie Sears Who are we? What do we believe in? And how will we stand up for those beliefs? These are big questions best explored through a big medium—a medium like theater. Our 2018–19 Fellows' cohort believes that theater is powerful because it’s not passive. Theater engages the full person: physical, emotional, intellectual, and relational. Theater is entertainment, and it's also immersive education, which is why we partnered with Bay Area nonprofit 826 Valencia to explore these big questions through theater. A student from 826 Valencia performs his written work at the 826 Valencia Tenderloin Center. Photo by Bill Poole. 826 Valencia is dedicated to supporting under-resourced students with their creative and expository writing skills through individualized attention. They kindly invited us to lead two workshops on writing and self-advocacy for 24 of their sixth-grade students, working on becoming actors and activists. Students first identified their core value
Read more

The Birth of a Play: New Work and the New Strands Festival 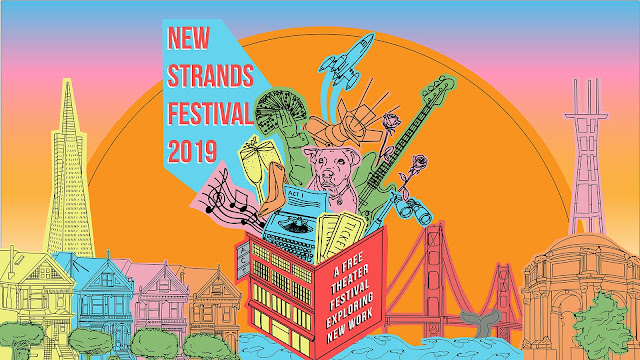 By Ariana Johnson  75 artists. 6 projects. 11 performances. 1 week. The New Strands Festival is a thrilling time. All our studios are packed with innovative new plays, brilliant artists are mingling, and there is plenty of good music, food, and discussion throughout. It’s a chance for audiences to see the wizard behind the curtain and be a part of the growth of new pieces of theater. This is my first New Strands Festival, but as one of A.C.T.’s 2018–19 Artistic Fellows, I’ve been a part of three new play workshops at A.C.T. For one, I was tasked with constructing a giant timeline across the wall of the studio so the team could test permutations of scenes. For another, I stashed copies of the script (and reading glasses) all around the rehearsal room so a performer could improvise a dance and then pick their dialogue back up no matter where they ended up in the room. That’s the key part of new play development: you support the artists, adapting the process to whatever best se
Read more 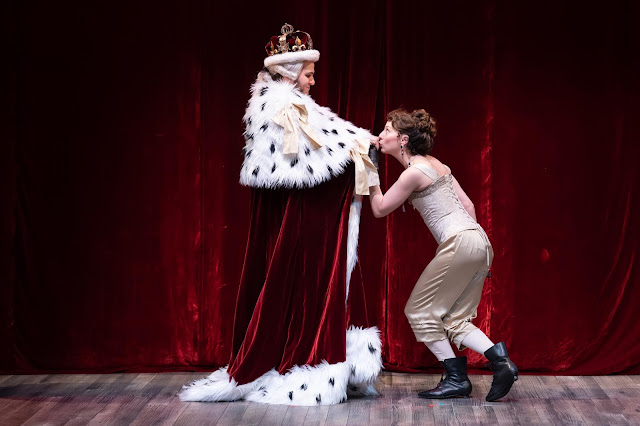 By Emma Penny “Welcome to Vanity Fair!” The cast of Kate Hamill’s Vanity Fair has slammed into The Geary, bringing some familiar faces. A.C.T. is thrilled to welcome back two alums of our Master of Fine Arts Program: Rebekah Brockman (class of 2013) and Vincent Randazzo (class of 2018). Before these actors made their way across the country, we chatted about their triumphant homecoming to the Geary stage. As a co-production with Shakespeare Theatre Company in Washington, DC, Vanity Fair first ran in STC’s Lansburgh Theatre. Did knowing that the show would end up at The Geary influence any of your acting choices in the rehearsal room? Brockman: It didn’t influence the choices, but it will influence how I play those choices. The Geary is a very steep house, so it’s important to play things up and out so what you are doing reads to the entire audience. Randazzo: I’m sure we’ll adjust accordingly in The Geary—playing “up to the gods,” as Carey Perloff said about that giant dom
Read more
More posts