Showing posts from October, 2018
Show all

Dare to Rock the Boat 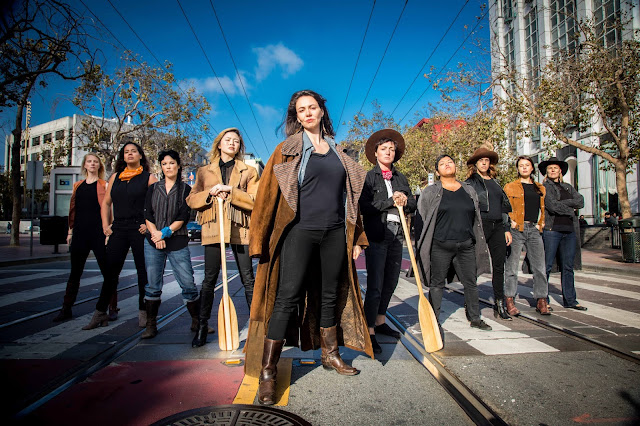 By Hannah Clague, Education & Community Programs Fellow On the first page of her play Men on Boats , playwright Jaclyn Backhaus gives a note on casting: “The characters in Men on Boats were historically cisgender white males. The cast should be made up entirely of people who are not. I’m talking about racially diverse actors who are female-identifying, trans-identifying, genderfluid, and/or non-gender-conforming.” In creating an event to accompany A.C.T.’s mainstage production of Men on Boats , we in A.C.T.’s Education & Community Programs department wanted to reflect Backhaus’s vision. Just as the playwright created a world in which actors from a variety of genders are given voice to tell John Wesley Powell’s story, we wanted to produce an event that provided a space in which people of a variety of genders could tell their own. I remember sitting in Mrs. Ross’s fifth-grade US History class, flipping through the pages of our History Alive! textbooks (cue my cl
Read more

Small Stage, Grand Canyon: How Did Men on Boats Scenic Designer Nina Ball Do It? 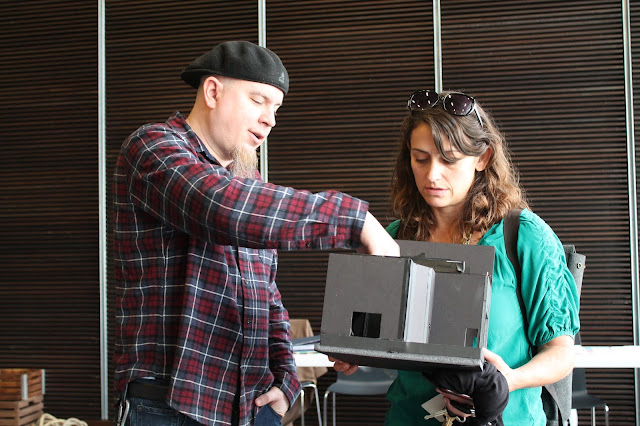 By Annie Sears Men on Boats is a play in all senses of the word. It plays with traditional gender roles. It asks actors to play historical figures they’re not, and it asks audiences to play along. For Scenic Designer Nina Ball, it started by playing with paper. We recently sat down with Ball to hear about the challenge and triumph of transforming the limited Strand stage into the vast Grand Canyon. Lighting Designer Robert Hand and Scenic Designer Nina Ball play with Ball's model at the Men on Boats meet and greet. Photo by Elspeth Sweatman. What does your design process look like? My design process follows a general shape that works for me, but has variations show to show. There is usually a lot of research followed by sketching, floor plans, and 3D modeling. A scale model usually follows, along with all the design drawings. But sometimes, like with Men on Boats , I go straight to a physical model. We wanted to play with the moving walls, so I did a lot of ripping of pa
Read more

The Blend for Blood: Behind the Scenes of Hookman 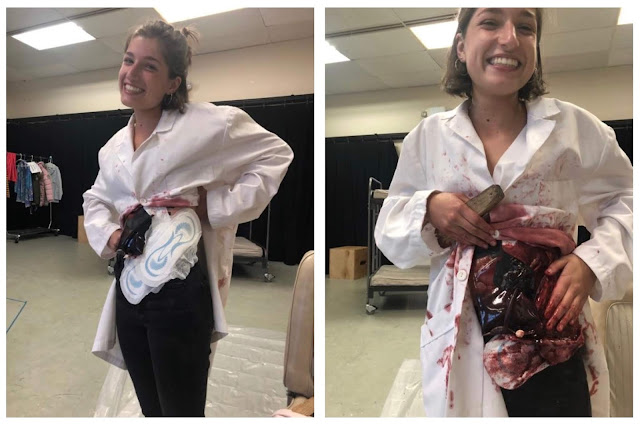 By Annie Sears Actor Luci Paczkowski before and after popping a blood pack, using menstrual pads to absorb the excess. Photo by Taylor Steinbeck. Stage blood: one of those special effects that’s entirely disgusting, yet entirely fascinating. The Young Conservatory’s production of Lauren Yee’s Hookman incorporates a lot of stage blood, and Devon LaBelle, head of the prop shop at San Francisco State University, has concocted the perfect recipe. LaBelle first made this mixture for Hookman ’s world premiere at Z-Space in 2015, and Special Effects Designer Jenny Cedillos is resurrecting it for our production. Blood may be the result of injury, but this blend is entirely harmless—even edible! So how do they do it? Ingredients 1/4 cup beet powder 2 tablespoons plus 1 teaspoon of xanthan gum 2 quarts of water Instructions  Sift dry ingredients together.  Slowly add dry powder mixture to water, stirring continuously to avoid any lumps. Refrigerate for up to one week. If yo
Read more 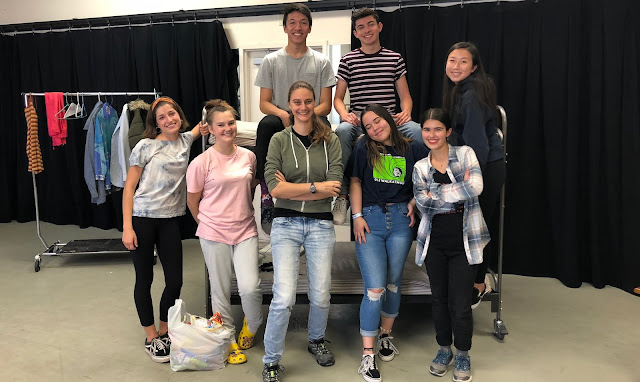 By Annie Sears Director Allie Moss with the cast of Hookman . Photo by Taylor Steinbeck. As Halloween approaches, the Young Conservatory is preparing something spooky: Lauren Yee’s psychological thriller Hookman . Director Allie Moss, who also serves as A.C.T.’s Literary Manager and Artistic Associate, describes the show as “a slasher comedy about trauma.” It’s a coming-of-age-story for Lexi, who has just moved away to college and experienced some pretty crazy events—like a lunatic running around and slashing girls’ throats. We sat down with Moss to hear about this thrilling and thought-provoking play. What draws you to this script? The story centers on a 17-year-old college freshman, and we don’t often see stories with a young woman as the central character. Her story is important, and it’s written in the vernacular of young women. It uses language that often gets dismissed or coded as informal or unimportant. That’s very attractive to me. The script also offers a
Read more

Sharing the Stage & Sharing a Home 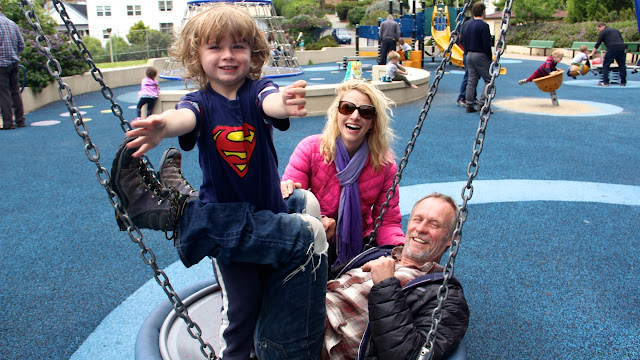 By Annie Sears Arwen Anderson and Rod Gnapp play with their son Rowan at a local park. Photo courtesy Arwen Anderson. It’s a big week for the Anderson-Gnapp family. Rod Gnapp is currently performing on The Geary as Stan in Sweat , which closes Sunday. His wife Arwen Anderson will soon grace The Strand as Goodman in Men on Boats , which begins previews tomorrow. Both Gnapp and Anderson are A.C.T. veterans. You may have seen Anderson most recently in Heisenberg (2018) or Gnapp—a graduate of A.C.T.’s M.F.A. Program—in The Realistic Joneses (2016). They met while working on Magic Theatre’s 2009 production of Mauritius , directed by Loretta Greco, who also directed Sweat . Later that year, they were cast in another play at Magic called Mrs. Whitney. Gnapp started flirting with Anderson—who was playing his character’s fifth wife—during that show, and they’ve been together ever since. Last summer, they performed together in Marin Shakespeare Company’s Hamlet as Gertrude and Claud
Read more 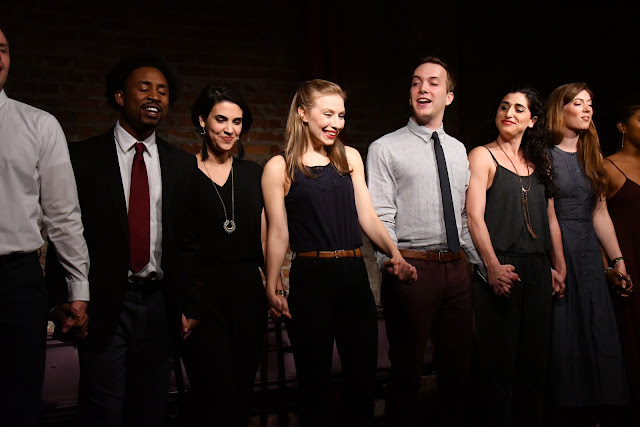 By Annie Sears The M.F.A. class of 2018 joins hands at the end of October 2017's third-year cabaret Now. Here. Us. Photo by Alessandra Mello In crafting this year’s M.F.A. productions, Conservatory Director Melissa Smith promised “a panoply of theater that will challenge and grow our students.” Third-year actors are seeing that promise come to fruition. They recently explored complex, serious characters in Chekhov’s Three Sisters , and next week, they’ll explore a different kind of performance, a performance that doesn’t require a character: musical cabaret. “Music is so primal,” says Avanthika Srinivasan. “It’s ingrained in our human nature. It’s how we express emotions, communicate, and connect with each other. It’s exciting and nerve-wracking to be emotionally vulnerable, but as actors, we’re always trying to practice being vulnerable.” “Preparing a cabaret is about coming forward with myself alone,” says Carlos Andrickson. “It’s a very exciting opportunity to sh
Read more

Everyone Aboard! Embark on the Colorado River with the Cast and Crew of Men on Boats 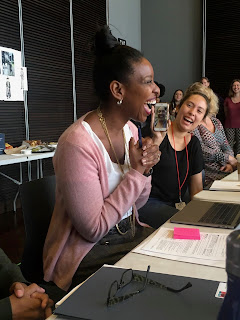 By Annie Sears Everyone aboard! We snuck into the first rehearsal for Men on Boats —playing at The Strand from October 17—and got an early look at the cast and creative vision for this subversive and exciting adventure. Men on Boats follows one-armed, Civil War veteran John Wesley Powell and his team of nine explorers as they traverse the Green and Colorado Rivers, ultimately “discovering” the Grand Canyon. Historically, these expeditioners were white, cisgender [a person whose gender identity is the same as the gender assigned at birth] men. But when the story is mounted on A.C.T.’s Strand stage, the characters will be embodied by a racially diverse cast of female-identifying actors. The script toys with traditional gender conventions, and because the script also contemporizes language and offers opportunities for bold physicality, it does so through comedy. “You are embarking on bringing to life what I think is a masterful—do we say mistress-ful—play,” said Artistic Director P
Read more

Intro to Reading, Pennsylvania: More Than a Monopoly Property 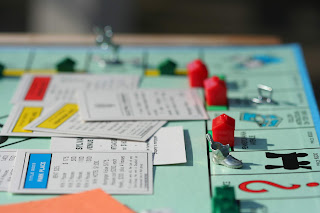 By Annie Sears A Monopoly board. Photo by John Morgan. Courtesy Flickr. Lynn Nottage’s Pulitzer Prize–winning play Sweat —playing through October 21 at The Geary—is set in Reading, Pennsylvania. If you’ve played Monopoly , you know the town. It lends its name to one of the game’s most desirable properties: the Reading Railroad Company, which proved an industrial giant throughout Reading’s history. Whether you’ve already seen Sweat or are planning on seeing it in the next few weeks, here’s a little background information on the town Sweat ’s characters call home. WHERE Reading is located in the southeastern portion of Pennsylvania, about an hour and a half drive northwest of Philadelphia. Reading sits on the Schuylkill River, which runs all the way to Philadelphia and connects to the Delaware River. Historically, this location proved extremely profitable, as the river made it easy to transport bulk cargo. WHEN 1748: Reading is founded by Thomas and Richard Penn, the son
Read more

Insight Into Sweat: An Interview with Playwright Lynn Nottage 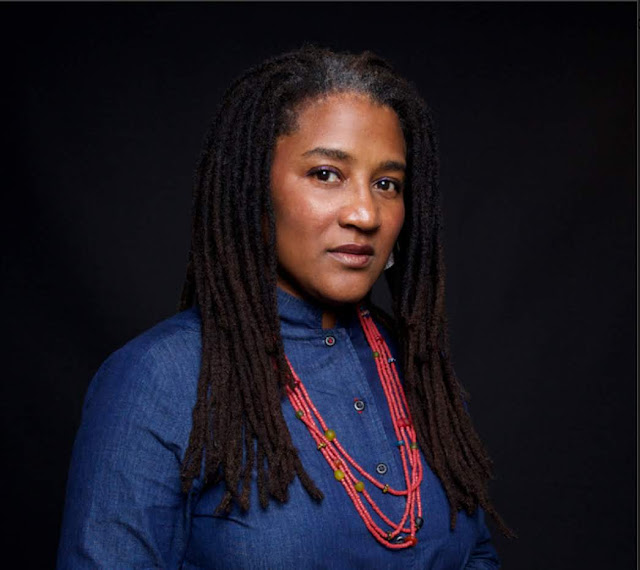 By Simon Hodgson Playwright Lynn Nottage has always raised up the voices of the forgotten, the unsung, and the marginalized. Years before winning her second Pulitzer Prize for Sweat (her first was for Ruined in 2008), she worked for Amnesty International. We spoke with Nottage about her connection with steelworkers and the months she spent researching Sweat in Reading, Pennsylvania. Playright Lynn Nottage. Photo by Lynn Savarese. Courtesy Lynn Nottage. Which voices really resonated when you went to Reading? What stood out in Reading was not the individual stories, but the collective story. These were, by and large, middle-aged white guys who had invested in the American Dream and had assumed they would work in their jobs until they were ready to retire, and have these fabulous pensions and health plans. They were broadsided when they woke up one morning to be told, “The life that you knew is no longer going to exist.” It forced them to rethink their identity and their relat
Read more
More posts