Showing posts from November, 2016
Show all

Finding Humanity in Our Brokenness: An Interview with Martin Moran 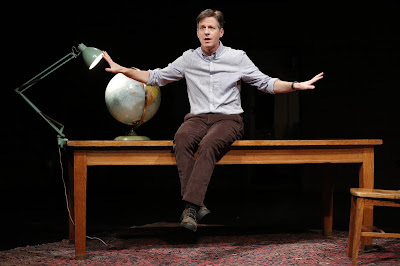 By Simon Hodgson Growing up in 1970s Denver, teenager Martin Moran looked like a poster boy for Catholic school—a kid with good grades, clean fingernails, and a smile for everyone on his paper route. Inside, however, Moran was grappling with the conflicting shame and thrill of a relationship with his male 30-year-old camp counselor, Bob. “Sometimes I felt scared and I liked it,” Moran says in his memoir, The Tricky Part . “All the concealment was a kind of strange power. An entire and buzzing inner life. A fourteen-year-old boy on a three-speed Raleigh, getting it every which way. I was getting away with murder, with pleasure, with crimes, and I was pulling A’s.” Martin Moran in All the Rage . Photo by Joan Marcus. Moran went on to become a successful actor, with Broadway credits including Spamalot and Cabaret , and television appearances on The Newsroom and Law & Order . He is also a writer, whose OBIE Award–winning show The Tricky Part (based on his memoir) describes
Read more

Ghosts in The Geary: A.C.T.'s A Christmas Carol 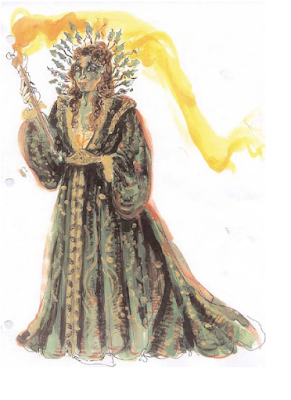 Original Costume Sketch of the Ghost of Christmas Present. By Costume Designer Beaver Bauer. This interview is adapted from the Christmas Carol edition of Words on Plays , A.C.T.’s in-depth performance guide series. Along with the curmudgeonly Scrooge and the adorable Tiny Tim, the ghosts of Christmas Past, Present, and Future are the most well-known and loved characters in Charles Dickens’s A Christmas Carol . But how do you translate these larger-than-life entities on to the Geary stage? Carey Perloff, A.C.T.’s artistic director and the co-writer of this adaptation of A Christmas Carol , offered her insight on Dickens’s seasonal spirits in this 2010 Q&A. What was your inspiration for the three ghosts in this adaptation of A Christmas Carol ? I wanted them to be otherworldly spirits, filled with light, and not like ordinary humans. Their locomotion is different: they swing and rise up on elevators; they hang above like specters. What can you share about the ghost of
Read more 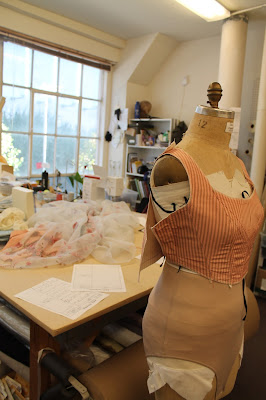 By Elspeth Sweatman Making a new dress for 2016 production  of A Christmas Carol . Photo by Elspeth Sweatman. For ten months of every year, A.C.T.’s A Christmas Carol costumes are hidden away in the costume shop: all 200-plus costumes, including thousands of shoes. It is Costume Director Jessie Amoroso’s job to guide his team through the month-long sprint to get this Bay Area holiday classic onto the Geary stage once more. We caught up with him between costume fittings to get a glimpse into the preparations for this A.C.T. staple. When does the process for Carol start here in The Costume Shop? We usually have about four or five weeks once it’s cast to fit everyone and get everything ready. That’s at least fifty hours of fittings over two weeks. Do you create any of the costumes from scratch each year? We usually create one or two new pieces. This year we’re making two new dresses, which are always fun to make. Are the costumes for our two Scrooges the same? Everythi
Read more 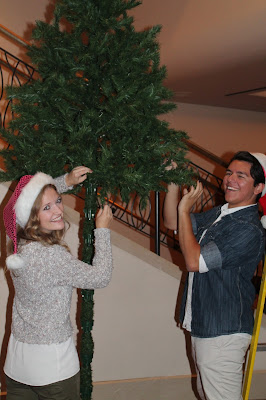 By Elspeth Sweatman  Fellows Emilianne Lewis and Joseph Reyes Decorating The Geary.  Photo by Karen Loccisano. Today, some of A.C.T.’s 2016–17 fellows participated in one of the most cherished rituals in the company’s calendar—decorating The Geary Theater for the holiday season and A.C.T.’s production of A Christmas Carol . After fueling up on pastries and hot cocoa, fellows Emilianne Lewis, Karen Loccisano, Julia Ludwig, Joseph Reyes, Elspeth Sweatman, and Marcella Toronto donned their holiday hats, turned on the carols, and set to work hanging wreaths, placing garlands, and untangling yards and yards of lights. Two hours later, The Geary had been transformed into a winter wonderland that even Scrooge would love. From Fred's Bar to the lobby to the Sky Bar, not an inch was left without a little holiday sparkle. "Decorating The Geary this morning with the other fellows definitely brightened my day and got me into the holiday spirit," says Special Events Fello
Read more 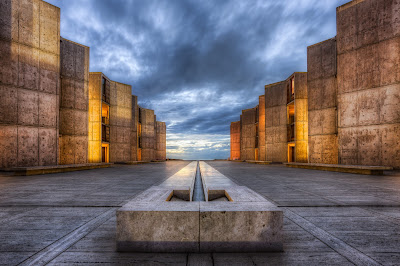 By Elspeth Sweatman Not only does Tom Stoppard’s newest play The Hard Problem —now playing at The Geary Theater through November 13—delve into the murkiness of consciousness and brain science, but it also presents a unique challenge for the set designer. How do you visualize consciousness? How can you represent it on the stage? “What I said to scenic designer Andrew Boyce was that I wanted the set to look like consciousness, not neuroscience,” says director Carey Perloff. “So we looked at the most beautiful science building that I think has ever been built: the Salk Institute in San Diego.” The Salk Institute. Photo by Justin Brown. Courtesy of Flickr. Built in the 1960s by architect Louis I. Kahn, the Salk Institute for Biological Studies is comprised of two mirror-image structures either side of a central courtyard. Made out of concrete and wood, these geometric structures create a temple of science on the shore of the Pacific. One of the institute’s most
Read more

Altruism versus Egoism in The Hard Problem 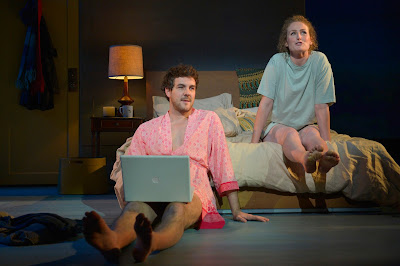 By Shannon Stockwell and Elspeth Sweatman “Since the very beginning, Tom Stoppard has written about what is the nature of goodness and is there such a thing as value ,” says The Hard Problem director Carey Perloff. “What are human values? How do we express ourselves as human beings? Is there such a thing as goodness, as altruism?” Altruism is at the center of Stoppard’s The Hard Problem , running at The Geary Theater through November 13. The term altruism—from the Latin alter , meaning “other”—was coined by French philosopher Auguste Comte in the nineteenth century. He wanted to create a religion based on a belief in science, rather than God. To Comte, to be altruistic meant simply to live for others. Dan Clegg and Brenda Meaney in A.C.T.'s 2016 production  of The Hard Problem . Photo by Kevin Berne. Since then, the concept of altruism and its counterpart, egoism, have become a hot topic of debate in a wide array of fields, from philosophy to biology to economics. The
Read more 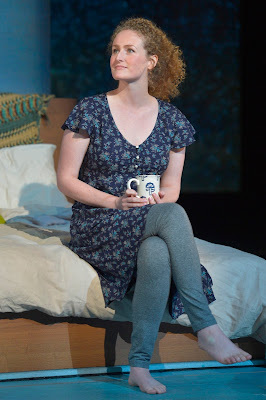 By Elspeth Sweatman Brenda Meaney as Hilary in A.C.T.'s 2016 production  of The Hard Problem . Photo by Kevin Berne. During A.C.T.’s 50th-anniversary season, strong women are navigating their way through traditionally male-oriented spaces. In Tom Stoppard’s The Hard Problem , running through November 13, psychologist Hilary Matthews fights to find her place in a scientific world that frowns upon the “feminine” emotions of mother love, goodness, and faith. Hilary is an oddity in neuroscience: a person who believes in the power of faith as well as the power of science. This worries her university tutor Spike, who fears that this will sink her chances of an academic career. “She has what he thinks are childish notions about the self, about consciousness, and about belief,” says director Carey Perloff. But Hilary’s faith is grounded in a pivotal event in her past: when she was a teenager, she gave up her baby for adoption. To cope, she turned to her faith in the
Read more 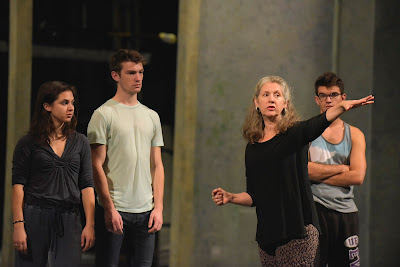 By Simon Hodgson “Every single play that I pick up has its own accents,” says A.C.T.’s Co–Head of Voice and Dialects Nancy Benjamin. “The actors, the director, and the coaches have to figure out what that accent is and do it authentically.” Before she started working on Stoppard’s The Hard Problem —playing until November 13 at The Geary Theater—we sat down with Benjamin to talk about acting and accents. Nancy Benjamin works with M.F.A. Program actors Emily Brown, Alan Littlehales, and Albert Rubio. Photo by Alessandra Mello. How important are the accents in The Hard Problem as an identifier of character? Accents and dialects help us understand the culture of the play, the environment, the status of the characters, their education, their place of origin, and how they identify themselves. Specifically with The Hard Problem , once I understand where the character comes from, their age, and their level of education, then the accent or dialect comes from that. Our accents, our w
Read more
More posts