Showing posts from March, 2016
Show all

Tom Stoppard at The Strand 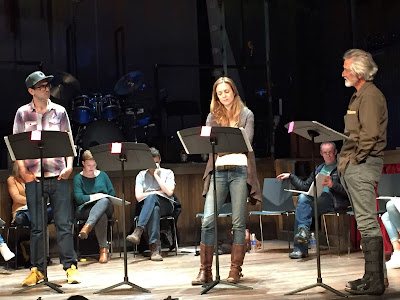 by Simon Hodgson Many thanks to everyone who filled The Strand on Sunday for the reading of Tom Stoppard’s The Hard Problem . It was great to see so many people showing up for our Scripts Play Reading Series . Aside from the pleasure of hearing Stoppard performed by an all-star cast, it was a treat to see several favorite faces from other A.C.T. shows. On Sunday, The Hard Problem cast included actors from no fewer than four of this season’s mainstage productions: Rinabeth Apostol from Monstress ; Ramiz Monsef, currently starring in The Unfortunates ; David Strathairn from the upcoming Chester Bailey ; and Rod Gnapp, James Wagner, Rebecca Watson, and Allison Jean White—all currently appearing in The Realistic Joneses at The Geary. Ramiz Monsef, Allison Jean White, and David Strathairn appearing in A.C.T.'s Scripts Play Reading Series for Tom Stoppard's The Hard Problem . Photo by Cecilia Padilla. One of the amazing things about coming regularly
Read more

Life, Death, and Language in The Realistic Joneses 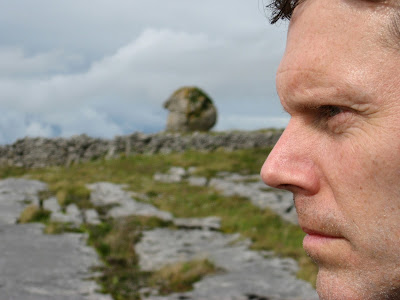 An Interview with Playwright Will Eno By Shannon Stockwell Playwright Will Eno has always been writing, “at least in some shy way,” he says. But it wasn’t until he was in his late twenties that he sat down to write a play in earnest. His plays have since won several honors, and one— Thom Pain (based on nothing) —was a finalist for the Pulitzer Prize in Drama. As for why he writes? He has some theories. “In some plain way, in the early days, I was probably trying to get my dad’s attention,” he says. “Or, maybe I had already sublimated him into some general idea of a large, unlistening Universe, so I was just trying to get some attention, and I don’t mean in just a needy little-kid way, but just some feeling or response from the Universe to prove that I existed or could be seen or heard.” Eno spoke with us about the world of The Realistic Joneses , now running at A.C.T.'s Geary Theater until April 3. Playwright Will Eno. Photo by Gordon Lish. What was the
Read more

A Special Beast: Wigs for The Unfortunates 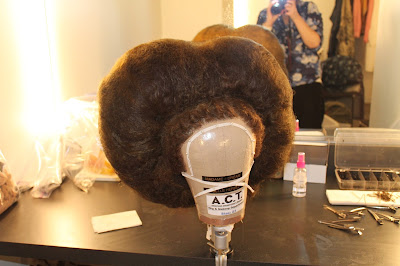 An Interview with A.C.T. Wig Master Kate Casalino By Shannon Stockwell The Unfortunates is now playing at The Strand Theater. Get tickets here! “The wigs for The Unfortunates are a special beast,” laughs Kate Casalino. “This show is a lot different than what I’ve traditionally done at A.C.T.” As A.C.T.’s wig master, Casalino works closely with costume designers to create the hairstyles for the show. For The Unfortunates , she had the opportunity to work on a design that balanced a World War I–esque time period with a “funky, weird” factor, resulting in some truly impressive (and massive) wigs. We visited Casalino in the Unfortunates dressing rooms to get the story behind the hair. How did you go about building the wigs? Luckily, The Unfortunates had been done previously at the Oregon Shakespeare Festival in Ashland. Even though the show has changed a lot since then, I rented the wigs that they used, to have a starting point. Only half of one of those wigs made i
Read more

Fellow by Day, Director by Night 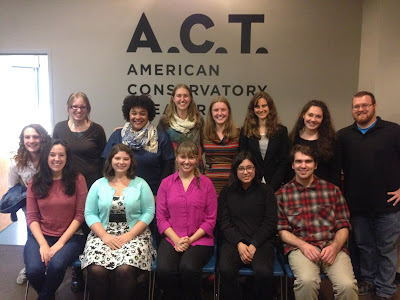 By Ariella Wolfe, A.C.T. Stage Coach Fellow Every year at American Conservatory Theater, there are aspiring young theater professionals doing fellowships in different departments of the company, from backstage to back office. Because of the size of the organization, most of us don’t work together regularly. That’s why The Fellowship Project is so important—it’s an opportunity for A.C.T.’s fellows to work together to produce a show from start to finish, contributing their disparate skills to a larger production and honing their craft as artists and administrators. A.C.T.'s 2015–16 Fellows. Photo by Gretchen Feyer.  This year’s Fellowship Project is Top Girls by Caryl Churchill. In addition to my fellowship in education and community programs, I am directing this production. This is allowing me to continue finding meaningful connections between my interest in directing and my passion for social change through theater. Young theater artists are drawn to
Read more

Inside the Visually Stunning World of The Unfortunates

From Kissing to Karate: Notes from the Will on Wheels tour of Macbeth 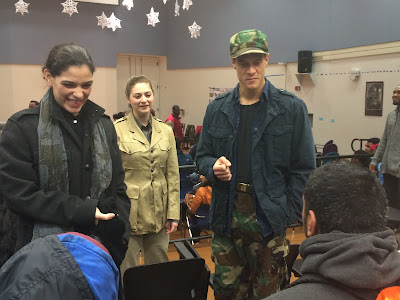 By A.C.T. School and Community Programs Coordinator Alec MacPherson Audiences at Will on Wheels performances are always eager to pick the brains of the actors involved. For some audience members, a Will on Wheels performance will be the first time they’ve seen Shakespeare performed onstage; for others, it will be the first time they’ve seen a live theatrical performance at all. But from Marin middle school students to San Francisco senior citizens, A.C.T.’s second-year Master of Fine Arts (M.F.A.) Program actors are lucky to encounter some of the most diverse and engaging audiences when they embark on A.C.T.’s annual Shakespeare tour to Bay Area schools and community centers. M.F.A. Program actors (L to R) Diana Gonzalez-Morett, Julie Adamo, and Stephen Wattrus talk to students during the Will on Wills pre-show interaction. Photo by Jasmin Hoo.   “How did you memorize all those lines?” “Did you have a karate sensei teach you how to fight?” “Was that a real kiss?
Read more

The Actor's Perspective on Will Eno 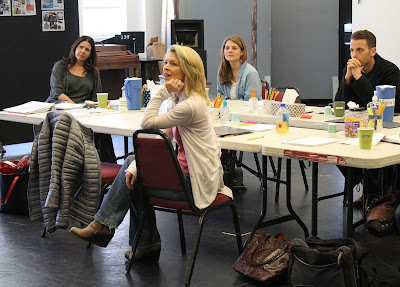 By Simon Hodgson and Shannon Stockwell New York Times critic Charles Isherwood describes Will Eno as having “a voice almost like no other in contemporary American theater.” That’s an honor, to be sure, but the truth of that statement is a challenge for anyone cast in an Eno play. When a playwright cannot be compared to anyone else currently working, it’s difficult for performers to figure out where the language stands, what other artists to draw from, where to find other examples. The contradictory adjectives used to describe Eno’s work aren’t much help either: poetic yet accessible, elaborate yet simple, lofty yet colloquial, deadpan yet emotional. “It’s a pocket of tone that is so peculiar,” says Loretta Greco, who is directing A.C.T.’s production of The Realistic Joneses,  opening March 16 . “With Will, an actor walks in the room and they either get it or they don’t.”  Left to right: Director Loretta Greco, actor Rebecca Watson, assistant to the director Lily Sorenson,
Read more

The Invention of Loneliness: A Few Words on Will Eno 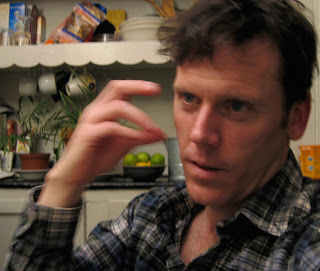 By Simon Hodgson “A Samuel Beckett for the Jon Stewart generation” is how New York Times critic Charles Isherwood described Will Eno back in 2005. Some playwrights wilt under such comparisons. Eno has flourished. Since the premiere of Tragedy: a tragedy in 2001, he has built up a canon of work that includes OBIE Award winner The Open House (2014), 2005 Pulitzer Prize finalist Thom Pain (based on nothing), and  Broadway hit  The Realistic Joneses  (2012), which starts its A.C.T. run on March 9 at The Geary Theater.   Echoes of Beckett For audiences who love language, the Beckett analogy is a useful way into Eno’s mix of quirky, clever, and compassionate. “I love Beckett’s work,” says Eno. “Beckett’s example has so much to do with finding your own way and forging your own path, so it’s a little funny to talk about influence. I hope that one of the things I’ve learned from him is the necessity of putting yourself out on a limb.” Eno may be conscious that he and Beckett have tro
Read more

By Simon Hodgson  Colm  Tóibín. Photo by Larry D. Moore.  In the week that Brooklyn , the movie based on Colm Tóibín’s celebrated novel, was nominated for three Academy Awards, the writer returned to A.C.T. to work on his new play, commissioned by A.C.T. and based on Henry James’s The Aspern Papers . The Irish novelist, critic, poet, and playwright is familiar with the rehearsal rooms high above Grant Avenue. In 2014, his Tony Award–nominated play, Testament , was directed by A.C.T. Artistic Director Carey Perloff at The Geary. In a conversation with our M.F.A. Program actors hosted by Perloff, Tóibín talked about aspects of his work of particular interest to acting students: character development, storytelling in film, and the challenges of form and structure as he works to adapt Henry James’s prose into a play. The last topic in particular is an area A.C.T. is deeply involved in, with the recent adaptation of Monstress and the world premiere of A Thousand Splendid Suns
Read more

Kismet to Comic Book in The Unfortunates 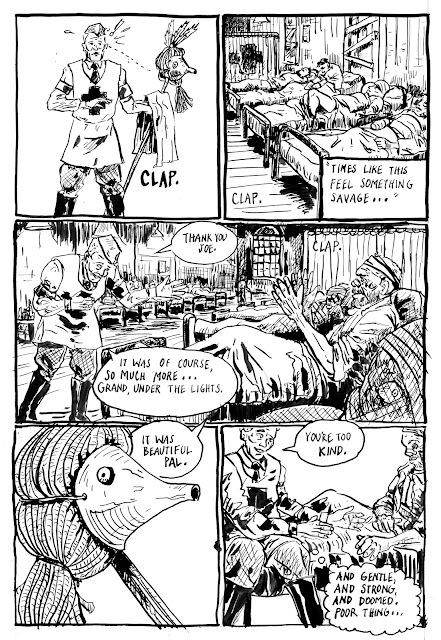 The Expanded Universe of The Unfortunates  By Shannon Stockwell  While super heroes like Deadpool, Ant Man, and The Avengers take over the big screen, the world of graphic novels also finds a home in live theater. The Unfortunates , the larger-than-life musical journey of Big Joe and his giant fists, is a visually stunning story that the San Francisco Chronicle says "could have emerged from the pages of a comic book.”  Throughout the creation process of The Unfortunates , writer and actor Ramiz Monsef kept telling his collaborators, “We need to do a comic book for this!” To Monsef, a n ardent comic-book fan, the world they were creating was perfect for the graphic-novel format. But there was a problem: Monsef can’t draw. “It was an equation I couldn’t finish myself,” he says. But one day, after a performance during the show’s run at the Oregon Shakespeare Festival, Monsef was told that there was a man backstage who wanted to speak with him. This man was comic-book arti
Read more
More posts