Hearing in a Deaf World: An Actor’s Clybourne Park Lesson

Every performance of Bruce Norris’s Clybourne Park has been met with laughter of all kinds, from boisterous to embarrassed. As production dramaturg Beatrice Basso recently described, the play’s humor can be uncomfortable and charged. Norris’s writing strips away the veneer of political correctness; we laugh at things that we know shouldn’t be funny, and then we question ourselves for doing so. This is perhaps nowhere as overt as with the character of Betsy in the play’s first act. Betsy is deaf, and the playwright makes jokes at her expense. And every night, by Norris’s design, the audience laughs along.

Betsy is played in our production by Emily Kitchens, who graduated from the A.C.T. Master of Fine Arts Program last year. We asked Emily about the challenges of presenting this character; she tells us below about the serious inspiration for her comic role.
—The A.C.T. Intern Blog Quadrumvirate

It always feels so personal to talk about my process as an actor before the play has closed, as if I might forfeit some of the character’s soul if I release the sacred bond between me and her into the universe too soon. As I write that, though, I feel like it’s weird or sensitive or shy of me to feel that way. But I’d use each of those words to describe myself anyway—so I guess it works.

There are some things that I will always respect about my process, in spite of (or perhaps reinforced by) Clybourne Park’s call to satirize myself. I am a spiritual person and that must be a part of my work. Do I believe the work I do as an actor has the power to help people? Absolutely. Do I believe in the power of laughter and love to heal people? I must. Do I believe that I have a voice, a soul, a light—something to give to this world? I’m trying. These mantras might “type” me as youthful or naïve or self-absorbed (or just as an artist) but I value bringing them to the work I do.

I believe that my characters always have something to teach me. Betsy in the first act of Clybourne Park is resilient, joyful, funny—and deaf. In preparation for this role, I had the privilege of getting to know two of the coolest girls I’ve ever met: Claire and Nikivia.

Last November, I spent some time in Leesburg, Georgia—my hometown. My mother connected me with two girls at the high school where she teaches. These charming, gifted, and articulate young women are Deaf. Not lower case “deaf” or “hearing-impaired.” Deaf—with a capital D. They see their nonhearing not as a disability but as something to be embraced. Nikivia will graduate and go to nursing school in northern Georgia, and Claire will go to the Rochester Institute of Technology in New York. They are achieving their dreams and creating happy lives for themselves. Claire told me that if she had the choice to be hearing or Deaf, she would choose to be Deaf because it gives her a special perspective on life. After spending time with these amazing high school seniors, I chose to make that special perspective on life my starting place for Betsy.

When I first read the play, before I met Claire and Nikivia, I thought, “Woah. A deaf woman. I have to be really careful here.” I was nervous about putting something inaccurate—or even worse, inaccurately offensive—into my portrayal of Betsy. Of all the things to worry about in this play, right? To portray a real, live person with integrity in my own work, I needed specificity. I worked very delicately with my speech patterns. It was just like studying a dialect, learning the sound changes. It is hard work to listen without hearing onstage. I try to gain information about the dialogue through people’s body language and facial expressions, purposefully trying not to hear their language. For example, if somebody is behind me talking, how would I know to turn to listen to them if I were deaf? If other characters that I can see have given their focus to that person, that’s helpful. Things like that. I have to admit, it feels good when people say after they’ve seen the show, “At first, I thought you might be really deaf.”

I don’t know if audiences laugh at Betsy’s deafness, her voice, some of the timing with other characters (like the “Lutefisk, I like lutefisk!” joke), or her own sense of humor. One thing that is really great is that she’s an alive, full, funny person with a great sense of humor—especially about her deafness (with lines like “Even I heard that!” when the trunk falls).

Betsy had me learn sign language, meet people from a culture I knew nothing about, “listen” in a different way onstage, and entertain the idea that who I am is lovely and different and absolutely laughable. She is a lovely young pregnant wife who happens to be deaf in Clybourne Park in 1959—a world where that perspective might be a huge gift. 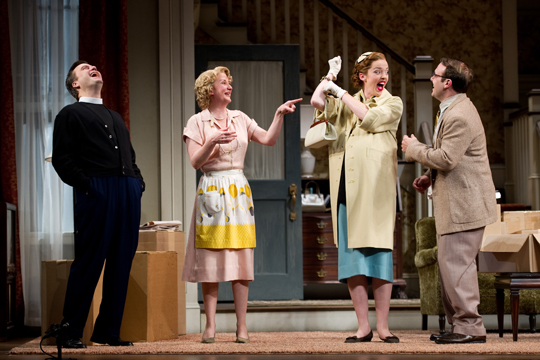