Rehearsal for Bruce Norris’s incendiary comedy Clybourne Park is in full swing at A.C.T., and nervous laughter is already reverberating in the halls. The play, a send-up of white middle-class liberal mores, relies heavily on humor to explore such loaded issues as gentrification, class, and “racial sensitivity,” but, as production dramaturg Beatrice Basso illuminates below, the humor is anything but comforting. As Ben Brantley wrote in his review of last winter’s New York production of Clybourne Park, Norris “sprinkl[es] the theatrical equivalent of itching powder on his characters and on us.” Audiences in New York, Washington, D.C., and London have loved the itch, though, and so does Basso.
—The A.C.T. Intern Blog Quadrumvirate 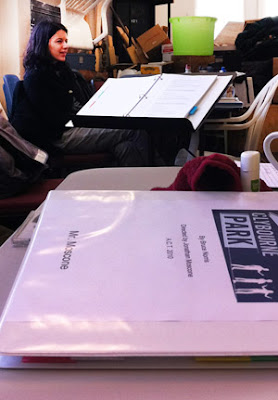 “Let’s have ‘We are the World’ as the initial song in the play,” jokes Clybourne Park director Jonathan Moscone. In a play that’s all about the persistent conflicts and embarrassments of race relations, a play that’s both a tragedy and a satire, that would be ridiculous. The whole room laughs. These kinds of moments happen a lot these days: silliness and laughter are encouraged as we work on this play that sets out to expose our missteps and foibles. And yet I am finding more and more in this rehearsal process that laughter is not a simple phenomenon, particularly when we are confronted with situations or topics that we find charged, that we find shameful.

As the production dramaturg, you have the privileged and strange position of being able to walk in and out of the rehearsal studio, based on the demands of your own schedule and your assessment of when your research or feedback will be most useful. So I enter the room late in the afternoon today after hours of office work: the big C-word joke in the play is underway. It’s a pretty offensive joke. I haven’t been present for that section before, and I freely laugh at the punch line. The rest of the room—director, assistant director, stage management team, cast members not involved in the scene—however, remain dead quiet. Is it because they’ve already heard the joke a number of times and numbness has set in, as often happens in a rehearsal process? Or am I the only idiot who doesn’t have the grace to privately (rather than publicly) laugh? Thank god this is a joke made at the expense of white women, and I am one, I think. I console myself with just that: “Relax, you basically laughed at yourself.” Still . . .

We go back a few pages. Now a white character makes a joke about a stereotypical view of black men in prison. The joke is meant to be delivered in a way that is awkward rather than funny, and it’s the character’s awkwardness that elicits full and general laughter. I experience that sense of freedom and relief that comes from a shared reaction. So much better than laughing alone. One feels justified and almost dutiful as laughter feeds laughter: “Look, he’s laughing, too.” But, because we are complicated animals, there’s also a little aftertaste: an awareness of something besides the awkwardness that is funny, which stems from an impulse that is more dubious, perhaps even racist.

Delivering this same joke later in rehearsal, the white actor puts on a stereotypical “black voice.” I have the total impulse to laugh at that—the actor is being very funny—and yet I stop myself. I really don’t know if laughing is appropriate; there are African American actors in the room; I tell myself that I should wait for others to laugh, as one can’t write explanatory footnotes to justify a burst of laughter. Maybe in the anonymity of a larger room, when we’re all in the theater, I might find myself laughing there, too, aftertaste and all . . .

Too much second-guessing, I know, and yet this play does that to you. We laugh our heads off one minute, surrounded by a general roar, or possibly completely alone, but we laugh; the next moment we may find ourselves questioning the very source of that instinctual reaction. It’s like a game, and we can only play along, willing to let go, to embarrass ourselves, to then think about it, maybe forget, and then laugh a little more—in recognition, mixed with distancing, mixed with delight, mixed with embarrassment.