Although the halls of A.C.T.’s conservatory and administrative offices are filled with the constant stream of actors taking classes during the summer, there is a definite (though indefinable) change in atmosphere when our Master of Fine Arts Program students return for the fall semester.

Maybe the renewed energy in the building is from the return of our new third-years. They’ve become our friends and colleagues—though they still feel a bit like our children (in the most adoring sense of the word!)—as they have grown as artists over the last two years. But many of them have been in and out of 30 Grant over the summer (some teaching and working; others just visiting), and they have all actually been “back” for a couple of weeks now, rehearsing their cabaret, Sweet Charity, which opened at Zeum on Friday, September 11. So maybe it is from the return of our new second-years, of whom we have seen less over the summer months and whom we are anxious to get to know better over the course of this year. Or maybe it is from the infusion of a new class of first-years, handpicked from the most promising young actors in the country. Who are these brave young talents? What will they teach us?

Of course, it is likely the combination of all three. At our core, we are a training institution, one that supports our school with money raised by our mainstage productions and contributions from our donors. It follows that we are all more than a little excited when our committed and passionate full-time (and I do mean FULL-time) students return to us. It is also unsurprising that we are curious to know what they have been doing with themselves all summer. So we asked!

In this post—part one of a three-part series—you can find out what members of the class of 2010 were up to between May and September.

Nick Childress: “Overlapping with a long second year, I began a fantastic rehearsal process with Cal Shakes’s production of Romeo and Juliet, directed by Jon Moscone. The cast had three other A.C.T. students and alums in it. From there (since tuition was raised AGAIN) I went to work for A.C.T. painting the theater with the facilities department and working reception to help keep the riffraff out of the A.C.T. halls. In a nutshell, very little vacation time, but much accomplished.”

Caroline Hewitt: “I spent this summer working at the Chautauqua Theater Company in western New York. I played Chloë in Tom Stoppard’s Arcadia, directed by Davis McCallum, and Perdita in The Winter’s Tale, directed by Annie Kauffman. Working on the shows was a great learning process: we worked not only with our peers but also with our teachers and guest artists. In addition to the shows we took classes including mask, clown, Alexander [Technique], voice, and yoga, and master classes with casting directors. There were also staged readings of new plays and a couple of other performances by the theater company. I was also able to attend a lot of lectures and see other performing artists (Garrison Keillor and Anna Deavere Smith, for example), because the Chautauqua Institution is a summer community with tons of stuff going on all season. I had an incredible time and learned an immense amount about myself as an actor!”

Sophia Holman assisted director Rebecca Taichman on A.C.T.’s production of Edward Albee’s At Home at the Zoo. She then visited her hometown of New York City, drove down to New Orleans, traveled to Bath (England) to workshop a show with the Young Conservatory (Riot, a brand-new play by Irish author Ursula Rani Sarma, which will receive its world premiere production at A.C.T. in April 2010), and took a trip to Rome.

David Jacobs: “My summer was spent in Tobie Windham and Stefannie Azoroh’s apartment performing American Buffalo with Richard Prioleau. It was one of the greatest theater experiences of my life. I also traveled to the Ilse Middendorf Institute for breath experience in Berlin, where I ran into a group of Israeli anarchists who changed my perspective on the world.”

Mairin Lee: “Here’s my summer in a few sentences: I taught for the San Francisco Opera Guild and in A.C.T.’s Young Conservatory. I originated the role of Mollie in a world-premiere adaptation of George Orwell’s Animal Farm with the Shotgun Players. And I took an amazing aerial conditioning class at Circus Center—while dreaming that some day I will get to combine my love of theater and circus on a stage somewhere!”

Kyle Schaefer: “I spent the summer doing a pieced-together version of Bernstein’s Candide at Berkshire Theatre Festival in Stockbridge, Massachusetts. I played Maximilian—the charmingly handsome prince who gets killed three times and wears a dress at the top of Act II. I’ve thought about it, and it’s at least the fourth time I’ve worn a dress onstage. It rained a lot, but I met some great people, had a great run, and saw some great theater. Then I road-tripped back with my girlfriend, Allison, through NYC, to Kansas City, and down to Tulsa, Oklahoma. Yeow!”

Tobie Lee Windham III: “My summer . . . the first half was spent working on American Buffalo with Stefannie Azoroh, Richard Prioleau, and David Jacobs . . . we started rehearsal as soon as school ended in May and had a three-day run in June. It was an amazing experience. And it was all done in a freaking apartment. Only a day after we closed the show I packed my bags and headed to France and Italy to embark on what has become a life-changing experience. I spent one week in Paris enjoying every possible thing there . . . and I loved how many beautiful people were there. After that I took a plane, charter bus, train, cab, and minibus to Italy to work with Primo del Teatro in a demystifying Chekhov workshop. Now Chekhov is a little clearer to me. The last part of my summer was spent in the beautiful state of Alabama, where I had a blast with my family.” 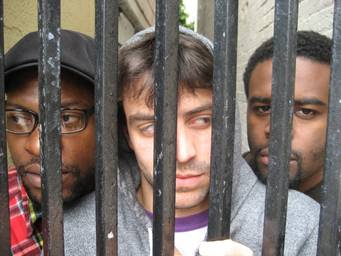