What Do You Know?

- August 13, 2009
posted by Mairin Lee, A.C.T. Master of Fine Arts Program class of 2010
Each summer, several students from the A.C.T. Master of Fine Arts Program take on the task of teaching and mentoring their younger colleagues in the Young Conservatory, solidifying what they’ve learned in the graduate program by passing it on to the next generation of theater artists. Mairin Lee, who will receive her M.F.A. degree from A.C.T. next May, describes the challenges and joys of stepping into the instructor’s role. 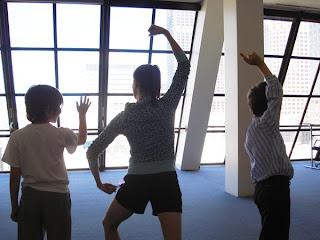 There’s nothing like hanging out with a bunch of third-graders to remind me of the following exchange from Oscar Wilde’s The Importance of Being Earnest:

LADY BRACKNELL: . . . I have always been of the opinion that a man who desires to get married should know either everything or nothing. Which do you know?

JACK: (after some hesitation) I know nothing, Lady Bracknell.

No bachelor am I, yet teaching physical characterization and improvisation to some of the world’s most impressive juniors leaves me feeling like one moment I’ve got it all figured out and the next feeling quite like Mr. Jack Worthing.

But this story has a prelude, and that begins eight years ago, when I took my first steps into A.C.T. as a student in the Young Conservatory. Two years ago, I made a jubilant return, this time as a member of the M.F.A. Program class of 2010. Two weeks ago, I entered the classroom once again, except now I was—oh my—the TEACHER.

It’s not my maiden voyage as an instructor—I’ve taught acting in places as diverse as the San Francisco Opera Guild and a South African township—but getting to teach for the very institution where I began my own theatrical journey is, to say the least, a privilege.

Faced with the task of leading a movement-oriented class for eight-, nine-, and ten-year-olds, I readied myself with a long-term goal for the session as well as daily lesson plans. On the first day, I watched as five children entered the room, shrugged off their backpacks, and eyed me with a mix of suspicion and amusement. I welcomed them and introduced myself, but before I could get another word out, one of the young girls asked me how many times she was allowed to die per class.

After the quick second I gave myself to be stunned, I answered, “As many times as you like, as long as you die a different way each time.”

The surprises have been nonstop ever since. I’ve witnessed these hungry little actors transform themselves again and again; we’ve encountered aliens, animals (particularly the nocturnal kind—seems to be a theme), humans of all dispositions and ages, raindrops that walk, and brushfires that talk. You name it, they’ve brought it to life.

We laugh a lot. We talk about our experiences. We explore infinite ways to walk across a room. Their voices are so pure; their dreams so unbridled. I learn from their gusto, their commitment, their imagination. I’m also learning that I know a lot more than I thought. That I’m able to articulate ideas better than I realized. That, even after these eight years, I could spend so many more in these studios and still have a world of questions before me. And I think, ultimately, that’s why I’m in this crazy business of acting. Not necessarily for the answers. But for the questions.

So as for this teaching thing . . . Exhilarating? Yes. Challenging? Yes. Completely and totally worth it? Yes, yes, and yes.
ACTMFAProgram ACTYoungConservatory MairinLee