1. They both know how to work a head-to-toe look.

Its dark brown curls were long and free; free as its genial face, its sparkling eye, its open hand, its cheery voice, its unconstrained demeanor, and its joyful air . . . “You have never seen the like of me before!” exclaimed the Spirit.

MRS. LEVI: I’ve seen the workroom a hundred times. I’ll stay right here and try on some of these hats.

2. They both believe that a well-laid table can work magic.


MRS. LEVI: I’m the best cook in the world myself, and I know what’s good.

3. Pretty much everything would be better if we all followed their advice.

This boy is Ignorance. This girl is Want. Beware them both, and all of their degree, but most of all beware this boy, for on his brow I see that written which is Doom, unless the writing be erased. Deny it!

On the threshold of the door the Spirit smiled, and stopped to bless Bob Cratchit’s dwelling with the sprinkling of his torch. Think of that! Bob had but fifteen “Bob” a-week himself; he pocketed on Saturdays but fifteen copies of his Christian name; and yet the Ghost of Christmas Present blessed his four-roomed house!

MRS. LEVI: I’m very interested in this household here—in Mr. Vandergelder and all that idle, frozen money of his. I don’t like the thought of it lying in great piles, useless, motionless, in the bank, Mr. Kemper. Money should circulate like rain water. It should be flowing down among the people, through dressmakers and restaurants and cabmen, setting up a little business here, and furnishing a good time there. Do you see what I mean?

5. They both have a real talent for eavesdropping.

It was a much greater surprise to Scrooge to recognise it as his own nephew’s [laugh] and to find himself in a bright, dry, gleaming room, with the Spirit standing smiling by his side, and looking at that same nephew with approving affability! 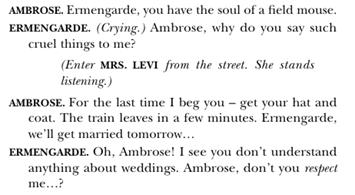 6. Either one can change your life in under 24 hours.

Much they saw, and far they went, and many homes they visited, but always with a happy end. The Spirit stood beside sick beds, and they were cheerful; on foreign lands, and they were close at home; by struggling men, and they were patient in their greater hope; by poverty, and it was rich. In almshouse, hospital, and jail, in misery’s every refuge, where vain man in his little brief authority had not made fast the door, and barred the Spirit out, he left his blessing, and taught Scrooge his precepts.

MRS. LEVI: I am helping him find a suitable bride.

AMBROSE: For Mr. Vandergelder there are no suitable brides.

MRS. LEVI: I think we can safely say that Mr. Vandergelder will be married to someone by the end of next week.

7. They’re both played by Catherine Castellanos!