Uncovering a New Dimension: Director Peter J. Kuo on the Making of In Love and Warcraft (Part Two)

- September 17, 2020
By Allie Moss
Click here to read Part One of this profile.
Originally, In Love and Warcraft was conceived as an in-person production to take place with A.C.T.’s MFA students in May 2020. But in the midst of the pandemic, A.C.T.’s Conservatory was forced to “pivot” and mount the show online instead. The May production did much more than fulfill the curricular need for student performance; it inspired a remount co-production from A.C.T. and Perseverance Theater, and it birthed a new medium that Kuo calls “live video theater.”
“Live video theater” is exactly what it sounds like: theater, happening on video, streaming live. And that live element is key; it’s what makes this form distinct from recorded videos of past theater productions. “When you’re watching something live versus recorded, the brain activates in a way that goes, ‘okay, something can happen,’” Kuo says. “That’s what I think liveness does; it allows us to be more forgiving, and lean into theatrical convention.” To facilitate that feeling, Kuo emphasizes the importance of the chat function on Zoom and other video streaming platforms. He says, “Comedy directors say, ‘You want that one person in the audience to break the ice. And once they laugh, there’s permission to laugh for everyone.’ I started feeling that way about the chat.” In the initial production, the chat was abuzz with everything from virtual laughter to personal, intimate experiences that the play elicited for audience members. Watching the production in real time and engaging with the chat was a communal experience that felt very much like the collective intake of breath that happens at an in-person theater performance. 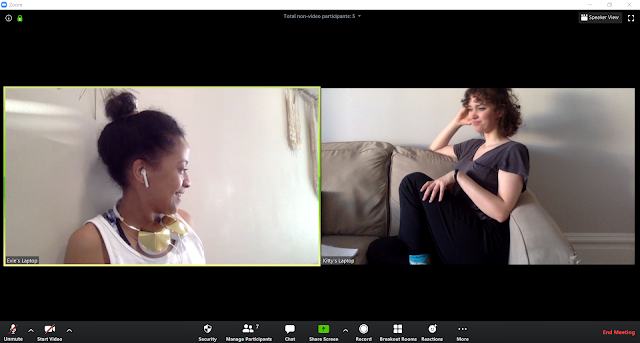 .
A.C.T. MFA students Cassandra Hunter and Evangeline Edwards rehearse In Love and Warcraft, directed by Peter J. Kuo.
Since May, Kuo has been pioneering this new form in the American theater. He has taught master classes at Perseverance Theater in Juneau, Alaska (out of which the current co-production between A.C.T. and Perseverance was born) as well as in A.C.T.’s MFA program. During a showing of student work after a recent masterclass with A.C.T.’s MFA students, the energy around live video theater was palpable through the screen. MFA Acting students, who could have easily been apprehensive about beginning their school year with an online-only curriculum, expressed excitement at the possibilities that now felt open to them.
Even as he breaks new artistic ground, Kuo is excited to return to In Love and Warcraft for the September 2020 remount. For him, the story of a young person engaging with and coming into their sexuality online is deeply personal. As a teenager playing an online game, he forged a strong connection with a fellow queer gamer who ended up being an integral part of his coming out process. “She was like a sexuality godparent to me,” Kuo says. “As things were happening in my life, she was a person I could turn to . . . I can’t imagine what my journey with my own sexuality would have been had I not had that person.”

Kuo brings this deep appreciation of building relationships online to his direction of In Love and Warcraft and his work overall with live video theater. “I do get very frustrated when people talk about how flat experiences are in this medium or online,” he says. “That there's this kind of pooh-poohing of digital relationships and digital life, as opposed to in-person ‘real life.’ I don’t think one should replace the other, but it’s another dimension.” Indeed, it’s a dimension that springs to life under Kuo’s expert direction, and serves as a much-needed reminder that like the characters in Shekar’s play, we can and must build meaningful connections in the new reality of our digital world.

In Love and Warcraft streams live September 4, 5, 11, and 12, and will be available on demand September 18–25. Tickets and more information available here.
AllieMoss InLoveandWarcraft PeterJKuo