“They call year two the pressure-cooker year,” says Master of Fine Arts Program actor Allen Darby. “When you move from being a first-year MFA student to the second year, the gloves are off.” Dressed in loose-fitting clothes and with hair tied up with an elastic band, the second-year actor has just come from a dance class. With only 60 minutes to talk and eat lunch before class starts up again, the life of an MFA student is a hectic one.

“The first year was more exploratory,” says Darby. “Now we’re honing what we’ve learned. Our work is under a microscope.” Darby is the first recipient of A.C.T.’s Prospero Society Scholar Award, one of several awards given to MFA actors. “It means a lot because it was given for artistic talent and work ethic. It was a nice way to start the year.” 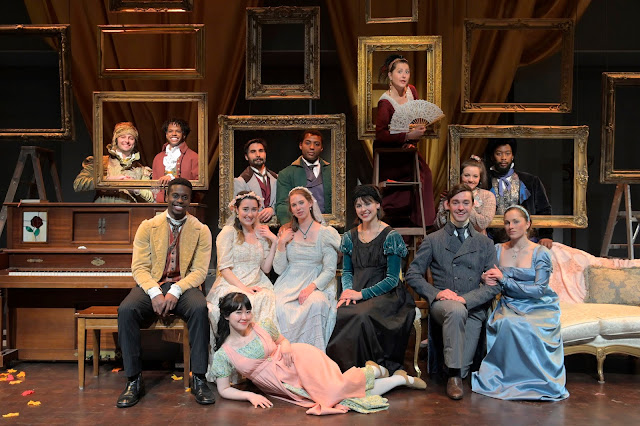 The cast of A.C.T.’s MFA Program production of Sense and Sensibility (2019). Photo by Alessandra Mello.

This new award is supported financially by the members of A.C.T.’s Prospero Society, a group of theater-lovers who have committed to support A.C.T. through a bequest or a living trust. “When MFA actors performed at a Prospero brunch last season,” says Prospero Society Chair and A.C.T. Trustee Jo S. Hurley, “the members really lit up. They had a wonderful time. That’s when I had the idea to create an award to support a student actor we could call our own.”

Hurley is a long-standing A.C.T. subscriber who has been coming to the Geary since A.C.T.’s first years in San Francisco in the 1960s. She fell in love with theater as a young girl in Kansas City. “At the age of nine, I auditioned for a play at a local high school. I got the part because I talked louder than all the other girls,” she says, laughing.

While Hurley rarely misses a mainstage show—The Great Leap, starring BD Wong, was a recent favorite—she is passionate about the Conservatory. “It’s an integral part of A.C.T.,” she says. “After all, it is the middle name in American Conservatory Theater.” For Hurley, supporting upcoming actors such as Allen Darby is critical. “The MFA students are fun, young, and talented. I love their enthusiasm,” she says. “I want the arts to continue in the Bay Area. And the only way they can is with supporters.”

To learn more about helping support an MFA student at A.C.T. and leaving a legacy for live theater in the Bay Area, please contact Sasha Habash at shabash@act-sf.org or 415.439.2415.
ACTMFAProgram AllenDarby ProsperoSociety