Coming home for the holidays is a multi-generational affair for the cast of A.C.T.'s A Christmas Carol. Since 2005, this adaptation of the seasonal classic has united actors from the Young Conservatory, the Master of Fine Arts Program, and professionals on the Geary stage. It is crafted to showcase a variety of experience, and has roles for actors from an elementary school student to an A.C.T. veteran like Ken Ruta, who was part of A.C.T.’s original acting company in 1967.

To make the familial bonds as strong as possible, the YC and MFA Program actors spend a week working together before rehearsals for A Christmas Carol start. During this time, each YC actor is paired with an MFA actor who guides them through the ins and outs of a professional rehearsal room, the bustle of backstage, and the bright lights of the Geary Theater. 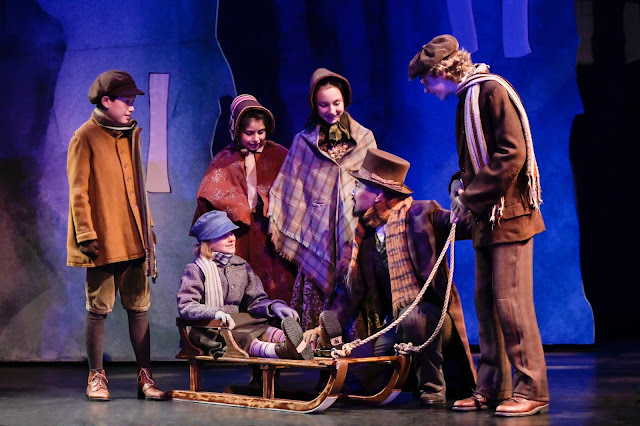 The cast of A.C.T.'s 2018 production of A Christmas Carol. Photo by Kevin Berne.

“The MFA performers share great advice, acting tips, and lots of support,” says Christophe Mitchell, a seventh grader in his fourth Carol who is appearing in multiple roles this year, including a clerk and a fruit seller. The YC actors learn from the professional actors too. “From the professionals, I learned how to be backstage, how to be a good cast member, and how to work with others,” says Sunil Mukherjee Maurillo, a two-time Carol veteran who is playing Peter Cratchit this year. “Through being part of Carol, it felt like I became part of a family in some way. It was super fun. I’ve made a lot of friends by acting in A Christmas Carol. It has been a great experience.”

The evergreen winter production is also an invaluable opportunity for the third-year MFA actors, who are preparing to step into the professional acting world. “It was such a wonderful opportunity to watch seasoned actors such as James Carpenter and Sharon Lockwood reinhabit roles they’ve played for so long as if they’d never left them, with fresh and ever expanding energy,” says MFA Program alum Afua Busia. “It was also lovely to learn from the freedom and playfulness of the Young Conservatory.” 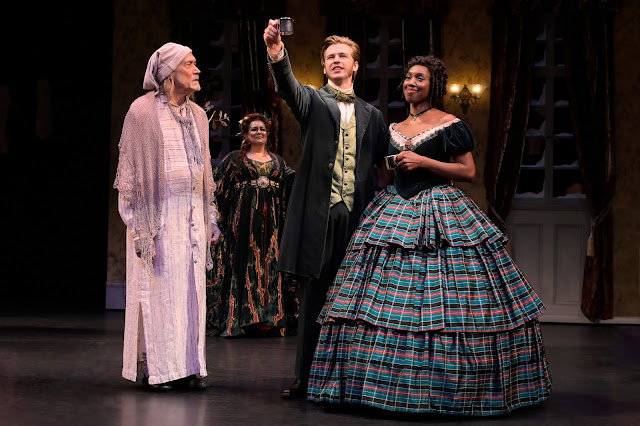 “Working with the professional actors was great. Everybody was so gracious,” says MFA Program alum Avanthika Srinivasan, who played Beth in last year’s production (and who starred in Testmatch at the Strand this fall). “With such a big production, you really need to pull your own weight. One of my major takeaways was the sheer professionalism, from their punctuality for rehearsals to the way they discussed their characters with the director to the work ethic they showed every day.”

Even for the professional actors, some of whom have been in Carol for many seasons, the new cohort of YC and MFA Program performers breathes new life into the tale. “It’s wonderful to see these children growing up and developing as actors and human beings,” says the experienced Ken Ruta, who started off playing Scrooge at A.C.T. in the 1960s and now plays Jacob Marley in the current production of Carol.

The holidays bring families together, yours as well as ours. Please join us in celebrating this holiday season at the Geary Theater with this year's production of A Christmas Carol.