As soon as director Pam MacKinnon read the script for a new play titled Testmatch, she fell in love with the writing of its playwright, Kate Attwell. Hear from the playwright and director about the journey from script to stage, and catch the world premiere of Testmatch at A.C.T.’s Strand Theater. 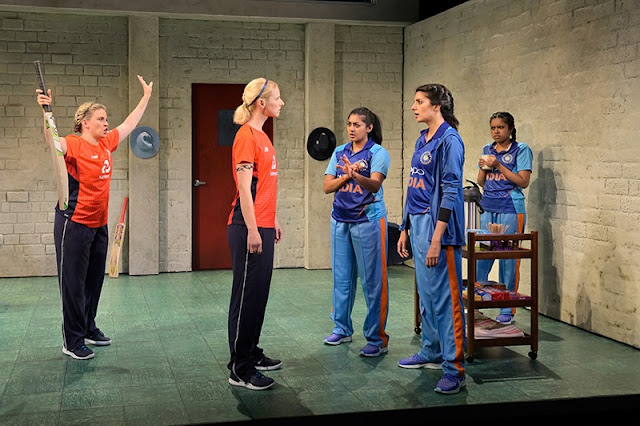 Pam MacKinnon: There are many extraordinary theatrical elements in Testmatch: the way actors take on other guises to tell the story in different ways; the oversized British accents; the Memsahib character that echoes Ophelia [in Shakespeare’s Hamlet]; the clash of contemporary and classical language; the character of Abhi who goes in and out of the scene as both the beleaguered sepoy and the main character who straddles both worlds.
Kate Attwell: Abhi’s like something out of French farce. [Laughs] I am always drawn to theater that in some way acknowledges its falseness. There’s such a long history of that, starting with the Greeks and the way they used the chorus as a built-in audience. There’s a teasingness to the way my work acknowledges the spectator. I am also interested in the political nature of theatricality—when the play trips you up and says, “Remember, this is a false construct and not concrete.” 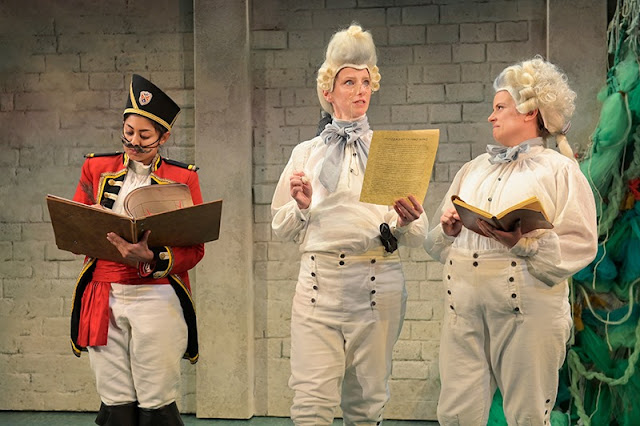 Left to right: Abhi (Lipica Shah), the Number One sepoy in an East India Company fort, performs damage control for two British officers, One (Arwen Anderson) and Two (Millie Brooks), as they forgo work to rewrite the rules of cricket in Kate Attwell’s Testmatch. Photo by Kevin Berne

PM: Yes, that’s at the core of the play. Testmatch starts off in a contemporary scene, with the audience on a delightful ride with six young women filled with competitive adrenaline, fear, ambition, joy, and pride. Even when the dynamics get prickly and overtly racist, it’s still (dare I say) comfortable. I love all these theatrical elements.

I know A.C.T. audiences will really enjoy spotting these tropes and getting to be experts on form. I also love what you said, Kate, about how this 95-minute entertainment breaks theatrical form and therefore breaks the audience’s expectations. You’re asking A.C.T. audiences to acknowledge that structure and then the possibility of breaking it.

KA: Exactly, and that’s where the metaphor of sport comes in. We’re told what the rules are, so we follow these rules. But what does it mean when we follow the larger rules of Western society? How damaging are they? And whom do they serve?

I hope, I believe, that there is something in this play for a lot of people, people of different genders, different races. I also hope that this play gets the chance to speak pretty frankly to a particular kind of white, often liberal person who believes (even if they don’t always admit it) that there is no problem any more. That believes that we’re “beyond” race or gender being an issue. To move forward, we all need to be open to understanding that the histories we’ve created still have repercussions. I think, as a white woman, this is an interesting fundamental dynamic for me—this play is speaking from a white lens, wanting to interrogate that very history.

This interview is excerpted from the Testmatch issue of Words on Plays. Want to read more? Order your copy here. Testmatch is onstage now through December 8 at the Strand. Click here to get tickets!