“Theater happens everywhere,” says Stephanie Wilborn, the community programs manager at A.C.T. Wilborn has been involved in theater education and community arts organizing for over a decade. Her mission is to use theater and social justice as a platform to give voice to those who are often overlooked or underrepresented onstage. “Theater is really about connection, finding your voice,” she says. One of her roles at A.C.T. is collaborating with Larkin Street Youth Services, a San Francisco nonprofit helping youth to move beyond the street. 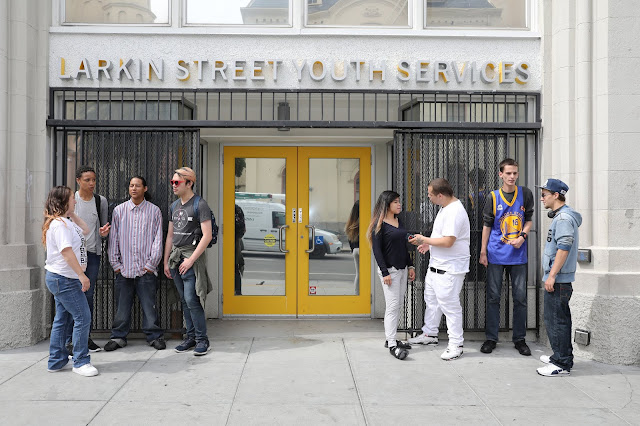 California is home to the highest number of young people experiencing homelessness in the country (38% of the nation’s total). Each year, 2,500 youth walk through Larkin Street’s doors. There are many factors that cause youth homelessness: abuse and conflict with a parent or guardian; a worsening affordability crisis compounded by unemployment; and involvement in the child welfare and criminal justice systems. These factors disproportionately impact youth of color and youth who identify as LGBTQ.

Every Monday, Wilborn and A.C.T. teaching artist Radhika Rao teach an ensemble class at Larkin Street for transitional age youth (18–24). This ensemble class includes warmup, improvisation, technical theater, and devised theater. “Devised theater is about creating your own story and about community creation,” Wilborn says. “We work with young folks finding their voices and coming out of their shells with ensemble classmates and with their peers. What we see is that the relationship to our students’ peers is changing and the relationship to themselves is changing.” Increasingly, underrepresented voices in theater are being heard. “It’s not the same narratives of who’s onstage, who’s behind the scenes, who’s telling the stories,” Wilborn says. “We’re seeing different experiences.”

In addition to the ensemble class, A.C.T. MFA students hold drop-in hours on Fridays, doing script work and analysis with Larkin Street students, and creating mentorship. Working with A.C.T. allows the clients at Larkin Street to imagine theater and creative opportunities in a different way. “There’s more out there than just being onstage,” Wilborn says. There are students who are interested in makeup, costumes, and careers in theater other than acting. Arts education allows students at Larkin Street to envision creative careers for themselves. Wilborn says, “It’s important to me that they know they have a voice, that they matter, that they can do whatever they want to do authentically.”