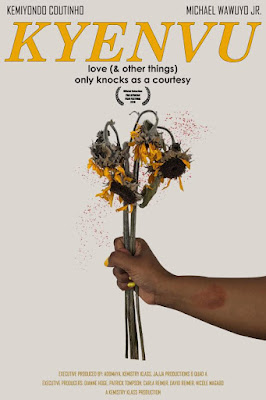 Congratulations to M.F.A. Program alumna Kemiyondo Coutinho (Class of 2015), whose first short film, Kyenvu, has just won the Grand Jury Prize at the Pan African Film Festival in Los Angeles and has been selected for the Women's International Film Festival in New York.

Coutinho wrote, directed, and stars in Kyenvu, the story of an independent young African woman who is struggling to find her footing in modern Uganda, where a controversial law banning miniskirts was passed in 2014 as part of a directive for “dressing decently." But as she lives through the taunts of others on public transport, she finds love in a bittersweet moment.

When asked what inspired her to create this film in a recent interview with We Are Moving Stories, Coutinho said, “I was tired of other people telling our own stories. I was also tired of complaining about it so I decided to do something about it.” Do something she did, traveling to Uganda and putting together a team of local artists—including Ugandan musician MoRoots—and crew to make this film a reality.


“It’s important to see African issues presented in their complexity,” said Coutinho. “Uganda is not one thing. . . . I wanted to showcase the beauty of Uganda, the colours, the humor, and a three-dimensional story that we never see.”

Coutinho's artistic vision was supported by several members of the A.C.T. family; M.F.A. Trustee hosts and members of the Board of Trustees Diane Hoge, Patrick Thompson, and David and Carla Riemer are executive producers on this film.

With its win at the PAFF, Kyenvu is now eligible for an Academy Award nomination in the short film category.