The Music of The Last Five Years 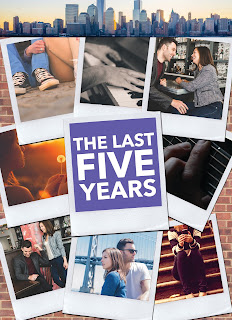 Just what is it about Brown’s music that has defined a generation? “Jason is a master of making pop-song forms work in a musical theater context,” says Matt Castle, music director for A.C.T.’s 2016 production of The Last Five Years, now running until June 5. “To me, pop music feels like a suspended, single feeling. But a theater song can’t be that, because there has to be something at risk in a scene, something that changes over the course of the song.” Brown’s music, Castle explains, has all of the infectious rhythm and groove of a pop song, but he uses the songs to move the story forward.

Brown’s composing process is largely instinctual and improvisational. “What I do first is I come up with a title, which I’ll generally throw out halfway through,” he said in a 1999 interview. “I have a title, and I’ll sit at the piano, and I’ll just come up with some chord that makes me happy, and I’ll sing the title.”

Musical theater scholar Ian Nisbet points out that, while Brown’s process may come from the heart, his musical instincts are actually very sophisticated. Just judging from the sheer difficulty of the music, Castle would agree that Brown’s music is highly intellectual. “Rhythmically, as flowing and natural and funky and groovy as it feels for the audience, it’s much easier for the audience to take it in than it is for the two actors to execute,” says Castle. “It seems so natural because the rhythms are all based on how a person speaks.”

To Castle, the most important device comes from the unique nonlinear structure of the musical. “Each of their stories starts with up-tempo songs and modulates toward an end point of reflective ballads,” he says. “When you cross the two streams, it means that there’s an alternation between ballads and up-tempo songs throughout the whole show, which is an ingenious way to create the variety that helps make each song distinct from the ones surrounding it.”


Castle points out that it’s hard to predict how Brown’s music will be remembered in musical theater cannon, because his body of work is so varied. “I don’t even know what kind of pattern I could form between Parade and 13 and The Bridges of Madison County and The Last Five Years,” Castle says. If Brown’s work can be labeled as eclectic, he’s also productive, and it will be intriguing to see what he creates in the next ten years. For the moment, however, there’s no denying that his music has staying power in the minds of everyone who hears it.

To learn more about the music in The Last Five Years , click here to purchase a printed or digital copy of Words on Plays, A.C.T.'s in-depth performance guide series. All proceeds go to our ACTsmart education programs, serving teachers and students throughout the Bay Area.

The High School Musical and Cabaret Ensembles of the A.C.T. Young Conservatory present a celebration of Brown's solo work and musical numbers in Through the Years with Jason Robert Brown, May 20–23, in The Garret at The Geary Theater.