A Summer of Firsts in the A.C.T. Young Conservatory

School may have been out all summer for many, but here at the A.C.T. Young Conservatory (YC), the joint was jumpin’! The summer of 2011 was one of the most exciting in years. It all began in June with the opening of Homefront, the first-ever completely original musical to be commissioned, developed, and produced by the YC. After years of developing our musical theater program and creating new musicals from existing music, the YC commissioned a new musical score from New York composer Creighton Irons. After a year working together (with me on board as playwright), Homefront was born this summer, featuring a cast of 19 (including two members of the A.C.T. Master of Fine Arts Program).

Within a week of Homefront’s opening at Zeum Theater, our four-week session of YC classes began at 30 Grant Avenue, filling the studios with eager and talented young actors, many of whom can only study with us during the summer because of the distance they live from San Francisco or because of the rigors of their school-year schedules. We love our summer students because they are so focused on their acting work, making it their singular daily effort.

While our exciting four-week classes got underway, rehearsals began for a new production of Korczak’s Children, Jeffrey Hatchers’s harrowing play about real-life pediatrician Janus Korczak, who championed the care and nurturing of the orphans in the Warsaw Ghetto during World War II. The 26-member cast ranged in age from 8 to 18 and also featured two of our M.F.A. Program students as Dr. Korczak and his steadfast helper, Steffa. This astonishing production, directed by the incomparable Domenique Lozano, enjoyed a completely sold-out run.

Without taking a breath, in mid-July we began our fast and furious two-week and one-week YC intensives. These series of courses bring acting and musical theater students together for a full day, five days a week, for either a one- or two-week journey, culminating in the presentation of a unique project created by each group. The building swelled to bursting as we saw our largest group of students ever take part in these intensives at one time.

And as if that wasn’t enough drama, in August we produced the very first Shakespeare ever in the YC! Director/adapter Amelia Stewart led a remarkable group of middle school actors in a magical rendering of one of the Bard’s most winning plays, A Midsummer Night’s Dream.

All told, more than 60 young actors appeared onstage this summer in A.C.T. productions and more than 500 young actors attended classes. It was truly one of our most dazzling summers ever in the YC.

Now on to fall! 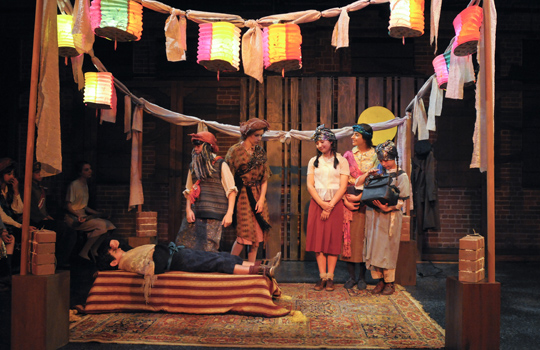