The Leap: Diving into the New School Year 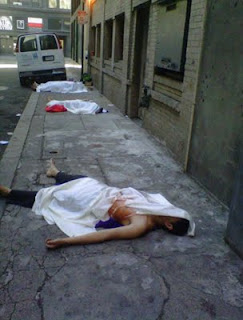 Never in my wildest dreams did I think that I would ever see Conservatory Director Melissa Smith sprawled out under a white blanket in a dirty alleyway, or Head of Voice Jeff Crockett lying motionless on a street grate outside a loading dock at Macy’s.

No, I am not describing the results of a fatal accident, but one of the products of this year’s “Leap,” an artistic immersion to kick off the 2011–12 year. For two days the A.C.T. community—including artistic staff, faculty, and M.F.A. students—gathered together for this creative powwow.

By far, the Leap is one of the most unconventional ways to “get to know each other” without any of the typical name-games and awkward introductions. Our mornings started off with group warm-ups and workshops designed to take us out of our element. We explored alternative ways to approach the work, which no one was sure of, but all were willing to investigate. Then, in the afternoon, we were charged with the task of performing a story with very few guidelines. It may sound simple; however, given that we had limited resources and time, there were challenges. Questions arose, and the collaboration began:

The group I was part of took our piece to a nearby alley, where we suddenly became children again. We played in the street, used props and fake blood, and fully committed to the story we were telling. It was through this commitment to the work that we formed our bond. The connection didn’t end with each other; security guards, workers, and passersby were curious about our project as well. We brought the art out into the community, and the community took interest. We had an audience! I came to realize that when you have a group of artists who are hungry for the work, they find a way to tell the story and, somehow, everything falls into place.

The process became rich by being open with each other. Each person had an idea and was free to voice it. Everyone took risks, and it became less about what we were doing, and more about how we were doing it. There was no right or wrong, no leaders and followers. We were all peers, teaching each other and learning from each other. Don’t get me wrong, it was not always magical, and there were creative differences and roadblocks. (There was even a race between two groups, to see who could get to the ninth floor and claim it as their space . . . quite intense). But by confronting the challenges together, and always with a sense of play, we were able to build the trust that is crucial for the start of the year.

The end result was incredibly inspirational. Each day we were challenged to be innovative, and the process generated a massive amount of imagination and resourcefulness. The Leap was demanding and posed many questions about how to approach the work. Lucky for us, this was just the beginning, and we now have all year to continue the exploration!