As You Like It, currently running at Zeum Theater, offers a rare opportunity to see A.C.T.’s core acting company members sharing the stage with the students of our M.F.A. program. The veteran professionals in our company have served as teachers and advisors to the students throughout their three years of training at A.C.T., and it is a fitting rite of passage for these master apprentices to share the stage with their mentors in their last A.C.T. production before graduating. The transition from teacher to colleague is always complicated, sometimes explosive, and often humbling. A.C.T. core company member Anthony Fusco reflects on the process below.
—The A.C.T. Intern Blog Quadrumvirate

So here I am playing Touchstone in As You Like It, with a cast made up mostly of the beautiful and talented members of A.C.T.’s M.F.A. Program class of 2011. Having taught these young actors on and off over the last three years, it’s a real pleasure to experience them putting their training to use as they—and I—wrestle with Shakespeare’s deceptively simple-seeming comedy.

As their teacher, I would of course step in and offer advice, criticism, and corrections whenever I wanted to. And I’m afraid I found myself in the early stages of rehearsal being a little too directorial in my new role as colleague and scene partner. More than I would with more seasoned cast mates, I barreled ahead with my own ideas, cavalierly expecting everyone to just follow along.

Then little by little I began to notice signs of push-back. Polite, friendly, gentle push-back. But push-back nonetheless.

I asked one cast mate to bring a prop to me when he entered. He replied, “My character wouldn’t do that.” I tried a new piece of staging out with another, certain that it was a vast improvement. She didn’t like it.

Recovering from my own sense of affronted superiority, I realized that they were both right. But, more importantly, I realized that I was in a larger sense wrong. I am no longer their teacher. I am their colleague.

And sometimes their student. Just yesterday, I was onstage with one of them in a two-person scene. I was blathering away, thinking about my timing, my inflections, my gestures, my my my . . . and the young actor opposite me just looked at me. Present, accepting, available, “in the moment”—all those things I try to teach them to be, and all of which I was managing to forget about.

Brought me up short. Reconnected me to the world of the play. The scene went better than ever. 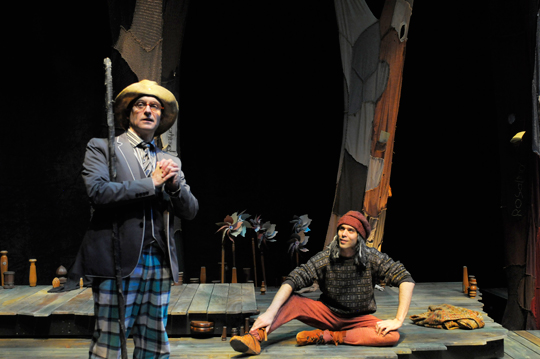