Another Layer: Euripides’ Ion and the 1950s

For the past four weeks, the A.C.T. M.F.A. Program class of 2012 has been in rehearsals for Euripides’ Ion. The production, directed by Barbara Damashek, opens at Zeum on Thursday, April 28th for its one-weekend run.

Ion is a strange animal. Written in the fifth century B.C.E., the play is nominally a tragedy—but it seems to have a happy ending. It also defies our contemporary expectations of these ancient plays by telling a very intimate story. The title role is a young man who doesn’t know who his parents are; the play’s other main character, Kreousa, is a mother who had to abandon her only child. So while preparing to direct the play, Damashek went beyond the usual sources. She found one contemporary book that seemed particularly meaningful: Ann Fessler’s The Girls Who Went Away: The Hidden History of Women Who Surrendered Children for Adoption in the Decades Before Roe v. Wade, a collection of testimonials from young women in the 1950s and ’60s who gave up children from unplanned pregnancies for adoption. In the rehearsal room, the cast was struck by the resonances between these women’s stories and Kreousa’s ordeal in Ion, written 2,500 years ago.

The staging and design you’ll see at Zeum evoke the turbulent and transitional post–World War II period, a time in America when gender roles and power dynamics were beginning to shift away from orthodoxy. By connecting the ancient play to a more familiar context, the production hopes to bring out for a modern audience the innate humanity of Euripides’ original text. One of the most immediate results of this decision is an extra challenge for our M.F.A. actors: we asked Jessica Kitchens, who plays bereft mother Kreousa, to tell us about tackling two time periods at once.
—The A.C.T. Intern Blog Quadrumvirate

As an actor, the crux of my job is to imagine and embody a human being who is other than myself. This requires massive amounts of research and daydreaming, especially when the world of the play lies outside of our contemporary one. I need to gather information about the era in which the play takes place in order to steep myself in those imagined circumstances: social dynamics, political atmosphere, gender relations, economic conditions, etc. So, how do I prepare for a play that was written in one period but which we’re setting in another?

In our final production of the year, we, the A.C.T. Master of Fine Arts class of 2012, are staging Euripides’ Ion. It is a play that was written in the fifth century B.C.E. and we are staging it in the realm of the 1950s. Now this is not to say that we’re throwing all the Greek stuff out—that would be impossible and undesirable; so much of the play is about religion and ritual and the ways that the gods interfere with human life. It’s more like adding in the aesthetics and dynamics of the 1950s as another layer to the puzzle.

I’m playing the role of Kreousa, a woman of the royal family of Athens, who travels to the temple at Delphi to get some answers from the gods. When she was a young woman, she was raped by the god Apollo, had his child, and then abandoned it. Now, years later, she and her husband are unable to have children and she lives with the secret of this lost child and all of the agony and guilt that comes with it. Part of the inspiration to set this play in the 1950s came from that era’s history of surrendering unwanted children. In the years before Roe v. Wade, women who found themselves with an unplanned pregnancy had few options—many women died or were severely wounded by poorly-performed illegal abortions, and many women were forced to give their children up for adoption.

I began by reading first-hand accounts of what it was like, in that era, to surrender a child: to carry it to term, give birth to it, hold its little hand for a few days, and then never see it again. The memoirs were very powerful. These women lived in a society that was not very approving of single mothers having children out of wedlock. There was a lot of shame, a lot of worrying about one’s future. There is something in these stories from the mid 20th century that I connect to as the actor playing this fifth-century woman. I can hear the voices of my mother’s generation in them. They open up a pathway of understanding and raw compassion that feed my development of the character. And they are representative of a piece of the larger picture of what life was like at that time; an investigation of that larger picture will lead to more richness and complexity in the performance as a whole.

Sometimes it feels like classic plays are set in different eras at random and one ends up wondering what the Wild West has to do with Romeo and Juliet. And sometimes an incredible connection is made and the added layer actually heightens the piece and allows for a greater connection between the performers and the audience. In the case of Ion, the latter is true. 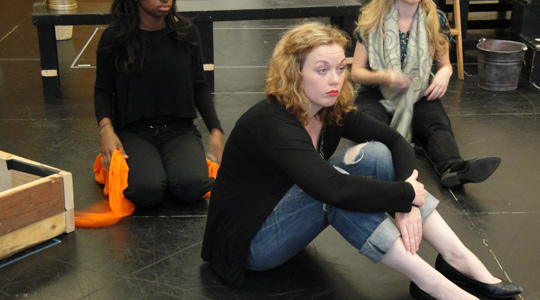