Rehearsing in the Dark

Dramaturgy Fellow Zach Moull had the privilege of sitting in on rehearsals of The Homecoming, Harold Pinter’s masterpiece of family warfare, which opens at the American Conservatory Theater this week. The play is thick with sex and menace; to create an atmosphere that would help the actors bring those qualities to life, director Carey Perloff made an unorthodox choice in the rehearsal room.
—The A.C.T. Intern Blog Quadrumvirate

For more than four weeks, the cast of Harold Pinter’s The Homecoming rehearsed in the dark. The play, set entirely within the confines of an East London house, calls for little natural light. The action largely occurs in the evening or at dawn, and the central scenes of the first act—in which Teddy and Ruth arrive at the house unannounced— take place in the dead of night. So before rehearsals began, director Carey Perloff asked the stage-management team to hang blackout curtains over all the windows of the William Ball Studio. They also wired several lamps into the space. The result was striking: the studio, ordinarily lit by the ubiquitous fluorescent lights of an office building, was transformed into a shadowy space that came to be known— more or less affectionately—as “The Cave.”

The cast of The Homecoming rehearses an evening scene in lamplight:
(L to R) Kenneth Welsh, Jack Willis, Adam O’Byrne.

The effect, though, was more than just atmospheric. Since the actors were able to control the lamps themselves, the rehearsal room’s improvised lighting melded with the sparse and precise landscape of Pinter’s play, where every object is significant. Light became another weapon to be wielded in the characters’ contestations over the territory of the house.

The production has since left The Cave and moved into the American Conservatory Theater, where Alexander Nichols’s lighting design balances the charged darkness of the rehearsal room with the need for an audience to see the actors as they perform.

Below are some photos of the first-act scene between Lenny and Ruth, taken on the second-to-last day of rehearsals in the Ball Studio: 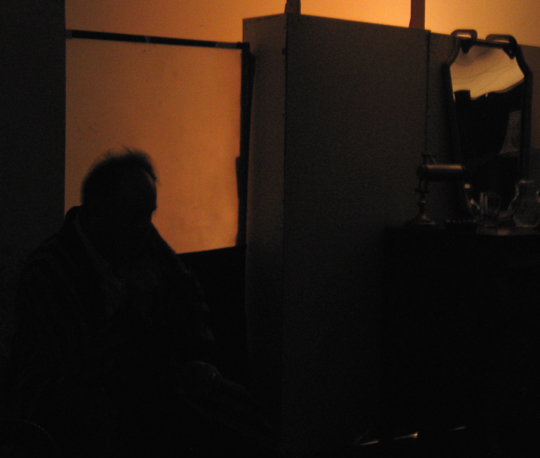 Lenny (Andrew Polk) waits by a window for Ruth (René Augesen) to enter the house. 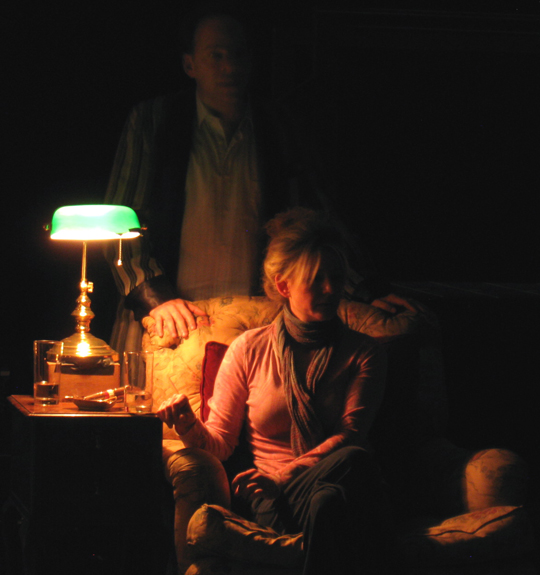 Lenny (Andrew Polk) lurks in the darkness behind Ruth (René Augesen), who is exposed
by the light of a banker’s lamp. The furnishings are domestic and familiar, but the
scene takes on the aspect of an interrogation in the unequal lighting. 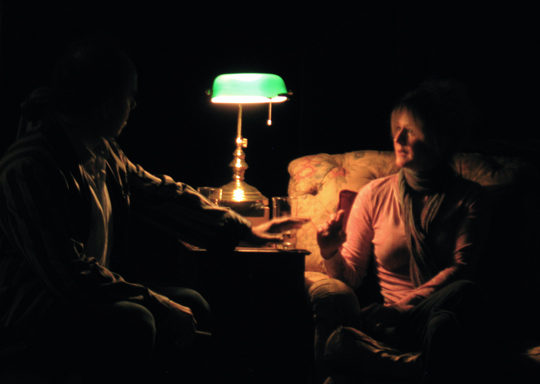