The students in the A.C.T. Master of Fine Arts Program have a lot of resources at their fingertips. Not only are they taught and directed by current and former A.C.T. core acting company members and associate artists like René Augesen, Gregory Wallace, and Marco Barricelli, they also get a chance to work with a rotating set of Bay Area theater professionals who run the gamut from artistic directors to choreographers to performance artists.

This season, the class of 2013 has worked with Erika Chong Shuch, director of the Erika Chong Shuch Performance Project; Dan Wolf of the hip-hop group Felonious; and, now, with Mark Jackson, award-winning director, theatrical innovator, and company member of Art Street Theatre and Shotgun Players.

Al Saiyid, an adaptation of Pierre Corneille’s Le Cid, directed by Jackson and performed by the M.F.A. Program class of 2013, opens this week in A.C.T.’s Hastings Studio Theater. Le Cid, a 1636 French tragicomedy, follows the story of the warlike Rodrigo and his equally blood-hungry lover, Chimène, as their obstinate pride and passion lead them far afield from their love and then back again. Jackson led the first-year students in a process of radical creation, using the script as a jumping off point for a freer, wider-ranging exploration of the story. Below, he tells us what it was like to devise a modern piece from this classic text.
—The A.C.T. Intern Blog Quadrumvirate 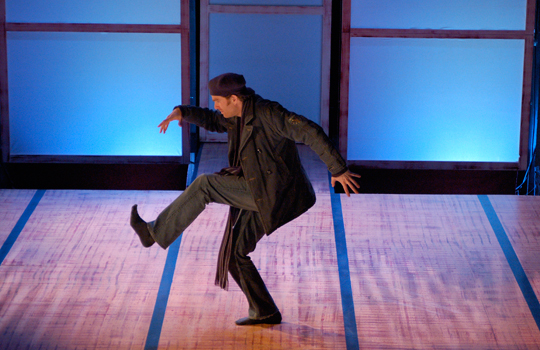 Mark Jackson in rehearsal for The Forest War at Shotgun Players, 2006. Photo by Benjamin Privitt.

These terms, “classic” and “devising,” feel like unfortunate necessities. We need a language to communicate with one another, to differentiate between this and that. But with labels eventually comes baggage and, worse, expectations having to do with the ever-dreaded “should.”

“Classic” can be quite a burden on a good play, and it often seems the classics bear the brunt when it comes to the notion of how plays “should” be done, making it difficult to really feel in any truly alive way what a Vanya or a Juliet or—in the case of Pierre Corneille’s Le Cid—a Chimène or a Rodrigo feels.

“Devised theater” has been in use in world theater for at least a few decades. Before then people called it other things. It’s nothing new. Yet it remains a mysterious term even for many who work in theater. It can mean anything from “dance” to “a play” to “performance art.” In any case, all “devised” essentially means is that the project did not begin with a script written by a playwright in isolation. Rather, the creative team begins with a theme, subject, or idea, then gets in a room together and begins to improvise in one manner or another. This goes on for a time until eventually, voilà, it’s “a show.”

A.C.T. Conservatory Director Melissa Smith asked me if I’d be interested in devising something from a classic play with the M.F.A. Program class of 2013. This past November they and I met nightly for a week. The anchor of our work was Corneille’s Le Cid. The initial question I proposed we deal with was whether or not the outrageous passions depicted in the play were anything one could connect with today. We spent half of each night on our feet using physical improvisations to explore our personal relationships to the play’s themes and characters. For the other half we sat down to read different English translations and discuss them.

By the end of the week we’d identified some scraps of movement, rough dramaturgical ideas, and more specific questions that intrigued us with regard to the play. What might compel our own senses of passion, honor, and duty to the extraordinary extent that these characters feel compelled? Is such commitment even possible in our contemporary culture? Could we handle such intense passions? If not, have we lost anything as a society, or gained? Most specifically, and most horrible to contemplate: could we take, or advocate the taking of, the life of a loved one who had done something so horrible to another loved one?

Those questions formed the basis of our work this past February, when we gathered again for a handful of weeks. Together as a group, we hacked open Roscoe Mongan’s 1896 literal translation, edited, rearranged, costumed, and staged it. As director, I did not arrive with a detailed plan for the actors to execute, but rather with the heap of our initial impulses found during that week’s work back in November.

We eventually came to call what we were making Al Saiyid: An Inquiry into the Primal Senses of Passion, Duty and Honor Found in the Frenchman Pierre Corneille’s Spanish Tragedy or Comedy Le Cid. Draft 1.

This title says a lot about our response to Corneille’s play. His title, Le Cid, is French for el cid, itself Spanish for al saiyid, the Arabic title that the “Moors” in the play would likely have given their conqueror, Don Rodrigo. We wanted to get back to the origins of honor, duty, and passion. The extended subtitle explicitly states the range of what struck us about the play: its themes, clash of cultures, aesthetic contradictions—as well as our impulse to question it.

The short sub-subtitle, “Draft 1,” is a nod to our process, which has been, and continues to be, open and fluid. We’re still making changes and trying new ideas, even with performances around the corner. A monologue was recently scrapped, for example, and replaced with a song. We created choreography for the song but then scrapped half of it. Maybe this will all still be there by opening. Or maybe the monologue will be put back in. We may even continue to make changes during our short performance run.

It’s more work than setting things according to plan and calling it done. But it’s also more fun, I think. And anyway, these actors are quite good at taking it all on, so why not? I have grown increasingly impressed with them over our time together and admit I’ll be sad for it to come to an end. They are doing extraordinary things, and they continually excite me with their inventiveness, openness, and commitment to detail.

As I write this we are going into tech and soon to open. I feel very eager to share with audiences this “draft” of our work. The audience will bring a lot of answers to a lot of questions, and they will elicit new questions. They’ll make us better, completing this process of turning questions into theater, and helping to devise a way to free this “classic” from that label.

I still question if I could handle what these characters try to do. I don’t have that answer yet. I suspect it may be that, no, I couldn’t. My hope is that Al Saiyid helps all of us who experience it, both the artists and audiences, to look our own senses of passion, duty, and honor in the eye—today, before we all become classics ourselves. Life is short. Why wait to burn brighter?
ACTMFAProgram ACTNewWork MarkJackson