Countdown to Litter: A Timeline of the Birth of a New Play

In the summer of 2009, A.C.T. presented Bay Area playwright Peter Sinn Nachtrieb with a challenge: write an ensemble-based play for the 12 actors in our Master of Fine Arts Program’s class of 2011. He considered a number of dozen-character-play ideas, but finally settled on a tale about 12 siblings. Not just siblings, but dodecatuplets. And not just dodecatuplets, but the Framingham Dodecatuplets, childhood stars who have watched their fame fade along with their cuteness as they transitioned into young adulthood. Litter, as the play became titled, was born.

The 36-year-old playwright grew up in Mill Valley and attended A.C.T. productions throughout high school (A Christmas Carol was a memorable favorite). As an undergraduate actor at Brown University, Nachtrieb started writing solo performance pieces for himself. After graduating, he returned to the Bay Area, where he became involved with the sketch comedy troupe Killing My Lobster and began writing full-length plays. He got his M.F.A. in playwriting from San Francisco State University in 2005 and has been earning a national reputation as a darkly witty new voice since his ferociously funny play Hunter Gatherers debuted at Killing My Lobster in 2007. His 2008 end-of-the-world comedy, boom, received 16 U.S. productions last season—making it the most-produced play in the country (other than holiday shows and Shakespeare)—and BOB, one of his most recent works, is being produced at the Humana Festival at the Actors Theatre of Louisville this spring.

Over the past two years, Nachtrieb has been collaborating with the class of 2011 in workshops and rehearsals, shaping the piece around the students’ unique talents and idiosyncracies. With Litter opening this week at Zeum Theater, he found some time to sit down and describe for us the conception, gestation, and birth of his new play.
—The A.C.T. Intern Blog Quadrumvirate

Litter
A Brief Timeline of Its Creation

May 2009
I meet with [A.C.T. Artistic Consultant] Beatrice Basso and [A.C.T. Dramaturg] Michael Paller over a semi-decent salad. They ask me if I’d be interested in writing a play. It would need to be an ensemble piece specifically written for the 12 actors that comprise the A.C.T. M.F.A. Program class of 2011. I say yes.

Summer 2009
After several bad 12-person play ideas (A Jury! The Months!), one seems to be sticking. I send Bea an email saying I’d like to write a play inspired by the fascination with huge families and fertility drugs creating large amounts of siblings. The characters would be 12 siblings born at the same time from the same mom. I think the play would mostly take place with the siblings as grown adults. The play could be called "Litter."

Bea likes the idea. It’s on!

September 2009
Bea sends me the headshots of the class. They all have very nice heads.

October 2009
First workshop with the class. Everyone gamely shares a sibling story and also performs a special skill (quite a few members of the group can burp on cue). We discuss what might be the unique predicaments of a 12-sibling group. (Space Management, Individual versus Family Identity, Chaos and Harmony emerge as sticky themes. Large sibling groups may be slightly similar to M.F.A. graduate school classes.) We also do an improv where everyone randomly selects a sibling “type” (The Leader, The Stinky One, The Sick One, The Angry One, etc. . . .) and they are performed to hilarious effect. Quite a number of these randomly chosen characters become the seeds of the fully fleshed ones to come.

April 2010
After a few more workshops, I bring in a sketch of each character, inspired by the energy and style of each actor. Everyone has a name (their birth order), a nickname (sadly cut from the current draft, but they were hilarious), some descriptive adjectives, a special skill, and a short first monologue that was my first hit on each voice. It’s a slightly uncomfortable and vulnerable moment for everyone. I am assigning a bizarre and often very messed-up person to each actor and am essentially saying, “This is what I saw in you!” Awkward. But everyone seems game.

I also bring in the first attempt at a 12-person scene. So much fun to hear, but somewhat overwhelming to write.

May 2010
We get a week to workshop the play together. I bring in about 100 pages of material, and the first semblance of a story and a play emerge. [A.C.T. associate artistic director and director of Litter] Mark Rucker directs the rhythms of the script with the cast, and I often run into the other room to try and write new scenes. The characters continue to develop and mature into bigger people. We see their hit song. We see their struggles with each other and collectively as they try to survive. We see them all try to sleep in a single bed at once.

Our week concludes with a reading for the A.C.T. staff. I feel very good about the characters and a lot of material, but I think the play isn’t messy enough, gritty enough, and is just a sketch of what it could be, so I throw out a lot of crap over the summer and try to mess things up and move things faster.

Fall 2010
As I continue to develop the new version of this script, I pop in a few more times to read drafts with the cast. The story is getting juicier and more fun and crazy. Finally, in December, I get all the way through to a frikkin’ ending. Character arcs are getting stronger and I finally feel like there’s a good play here. Phew! And it’s pretty funny. I still feel bad about the large volume of fart jokes that Patrick [Lane] has to perform. But they are all very important for his character.

February 2011
Rehearsals begin! Over the first week I continue to bring in lots of new pages and refinements and the lovely actors are taking control and making this crazy family come to life. The themes and dynamics we discovered in that first workshop 15 months before continue to be the foundation of the play. Not to mention a great number of their special skills they unwittingly shared (I don’t know if Max [Rosenak] would have shared his “fake ballet” techniques if he knew how that might manifest itself in the play).

I hope audiences find Litter a wonderful salute to this ensemble of actors and that the play adequately showcases their phenomenal talent. These guys are on the cusp of leaving their own little family of the last three years. As they venture into the foreboding world that is the professional acting life, I hope they, like the Framingham Dodecatuplets, all carry a little of each other’s bits inside of them as they go. 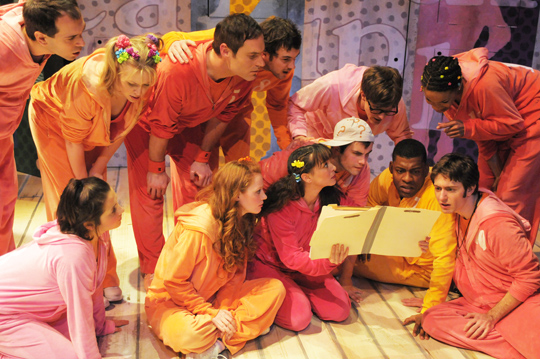