Last week, the Master of Fine Arts Program class of 2012 opened Dario Fo’s Archangels Don’t Play Pinball, directed by A.C.T. Head of Movement Stephen Buescher. The play, a zany satire of political bureaucracy, follows the tough-but-tender underdog Lanky from rags to riches and back to rags again. (Check out a plot description here.) Publications Fellow Emily Hoffman served as assistant director for the production, and tells us what it was like to build a physical comedy like Archangels. If you haven’t seen it yet, you can buy tickets for the remaining performances here.
—The A.C.T. Intern Blog Quadrumvirate

There’s a reason Dario Fo’s Archangels Don’t Play Pinball doesn’t get performed much. It’s long, sprawling, and unwieldy: the action travels from a bakery to a bar, to a streetwalker’s apartment, to a pension office, to a dog pound, to a first-class train car, to the presidential suite of a hotel, back to the bar, and ending back at the streetwalker’s apartment—with only a tenuously thin thread of logic for guide.

But logic is not why you perform Dario Fo. Logic is about as far from Fo’s theatrical vision as you can get. In 1997, after more than 40 years of authority-defying, politically-biting, commedia dell’arte–inspired theater-making, the Italian playwright and performer was awarded the Nobel Prize in Literature by a committee who dubbed him an artist “who emulates the jesters of the Middle Ages in scourging authority and upholding the dignity of the downtrodden.” For Fo, the script is a vehicle—for political commentary (he is a virulent anti-Fascist and has been arrested and censored countless times in Italy and abroad), for physical comedy, and for a sort of ebullient, even life-affirming, absurdity. The script and even the plot are secondary to the life of the play in performance. The M.F.A. Program production treats the Archangels script in much the same way. And this is how Stephen works best.

I am hard-pressed to imagine a more valuable experience in the theater than watching Stephen take a few lines of text, or a one-sentence stage direction, and draw from it an entire physical world.

When Lanky, our protagonist, goes to the pension bureau in Washington to get his VA benefits (he’s been wounded in—where else would a comedian get wounded?— the coccyx), there are some stage directions about clerks’ windows closing and Lanky getting cut in line. Stephen knew that these stage directions were only a shadow of what existed in the play’s first performance in Milan in 1959. And so he came in with a set of stanchions (the red velvet ropes and brass poles that are used to make lines at the movie theater), two short staircases, two identical suitcases, piles of paper, a paper shredder, and an unbearably awful Muzak rendition of “The Girl from Ipanema” by Kenny G. Then he set the cast loose. After a lot of playing, and a lot of polishing, we ended up with a highly-choreographed, wordless, 10-minute send-up of bureaucracy. Waiting in line at the DMV will never be the same. 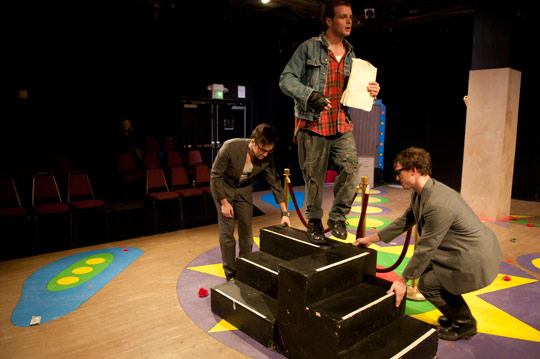 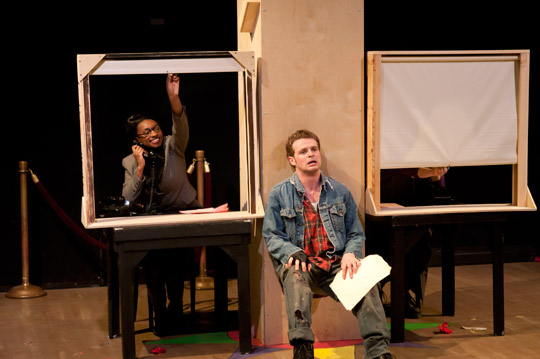 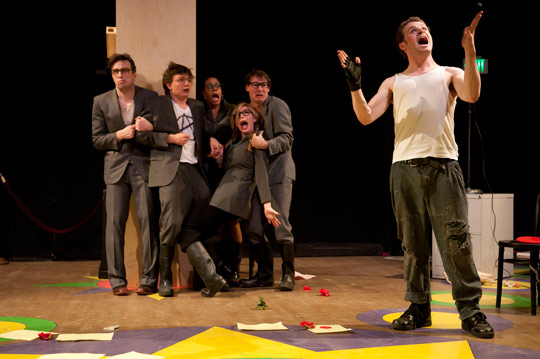 It may seem extreme, but so is the play’s absurdity, as seen in the moment following Lanky’s epic queuing. Finally getting the attention of the clerks, he learns that, due to a bureaucratic mix-up, the government thinks he is a dog—a labrador retriever, to be exact. And in order to fix this mistake, Lanky must spend three days, as a dog, in the local pound. Unsurprisingly, there are some surprises in store there. 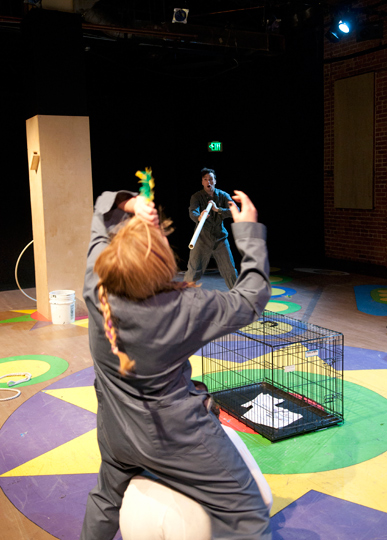 The dogcatchers get hit with their own dart. Maggie Rastetter and Matt Bradley. 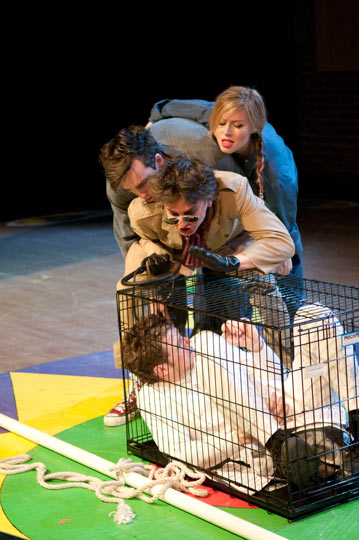 Lanky in the cage. (Front to back) Alexander Crowther, Jason Frank,
Matt Bradley, and Maggie Rastetter.

This is the kind of theater that reminds us why theater is its own, distinct art form, different from any other. Don’t get me wrong, theater can be literature. I’m not one of the theater absolutists who thinks you can’t study Shakespeare in an English class—you can, and there’s much to be gained by doing so. But with a play like Archangels, you’ve got to experience it. This play doesn’t live on the page—it lives in the bodies of the actors as they flip over tables, ricochet off the walls, get sunk in dog cages, and lose their pants (you’ll understand when you see it). And it couldn’t possibly live on a screen—this is the kind of comedy that only works in the flesh. It’s about spectacle. It’s about something happening right here right now in the theater. It’s about who will flub a line tonight and who will catch that flubbed line and run with it and get an even bigger laugh. It’s about energy, timing, commitment. It’s about laughter. And I think I can say without overreaching, that it’s about laughter as power. As a tool of the disenfranchised. Fo’s vision is a comic one, but it’s a revolutionary one too.

What’s your take on this kind of theater? Do you have a favorite physical comedy experience? Click on “Comments” at the very bottom of the post to leave a comment.