- February 02, 2011
Harold Pinter’s The Homecoming begins rehearsal at A.C.T. this week with Artistic Director Carey Perloff at the helm. This is not the first Pinter-Perloff production, not by a long shot. Perloff’s relationship with the Nobel Prize–winning British playwright began in 1988, when she staged The Birthday Party for Classic Stage Company in New York. Pinter was so impressed by the production that he invited Perloff to direct the American premiere of Mountain Language at CSC soon after. She went on to direct a 1990 Mark Taper Forum production of The Collection, a 1998 A.C.T. production of Old Times, and a 2001 A.C.T. production of The Room and The Celebration (another American premiere), which had its first preview performance, a profoundly moving experience for all present, two nights after 9/11. A.C.T.’s relationship goes back even further—to 1984, when A.C.T. founder William Ball directed Old Times.

When Pinter died in 2008, Perloff wrote a moving essay about Pinter and his legacy for the San Francisco Chronicle. She nevertheless remained determined to find a more visceral, theatrical way to celebrate her friend and collaborator and to honor his stature among the most important dramatists of the 20th century. She ultimately chose to direct Pinter’s masterwork of family menace, The Homecoming, a play that is elliptical, dangerous, filled with non sequiturs and maddeningly secretive characters, deeply unsettling, and sometimes uproariously funny. In other words: it’s classic Pinter.

Knowing all this, we still wanted to know more about Pinter, Perloff, and A.C.T., so we decided to do some rooting around in the archives. We found a treasure trove of photographs and musings by Perloff on Pinter and his plays. We’ve included a few highlights below.
—The A.C.T. Intern Blog Quadrumvirate 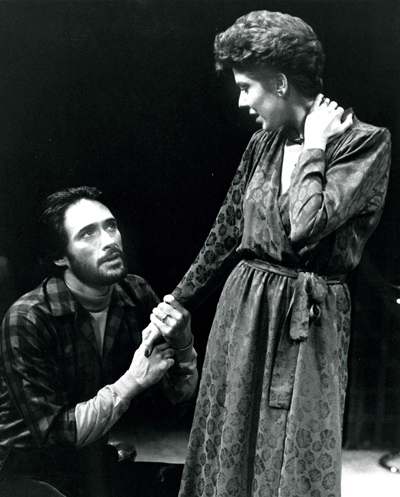 George Deloy and Barbara Dirickson in the 1984 A.C.T. production of Old Times,
directed by William Ball (photo by Larry Merkle)

“Pinter’s characters are as complex as the human beings we meet and wonder about every day. In drama, we tend to simplify characters and their motivations so they can be safely labeled: this is ‘the battered wife,’ this is ‘the aggressive man,’ this is ‘the nymphomaniac.’ As Pinter says, we want to put them on a shelf out of harm’s way. But he finds human experience much more richly ambiguous, because he’s interested in the unverifiable past, whether it’s the past of five hundred years ago or of five minutes ago. If you ask a group of people in a room to describe what happened five minutes ago, they’ll each tell a different tale, and that’s what he finds fascinating. So memory in Pinter’s plays becomes a weapon, an active tool in staking a claim to the present. His plays are so actable because they’re incredibly, vividly, moment to moment. And the ambiguity comes from the impossible challenge of attempting to understand human behavior.” 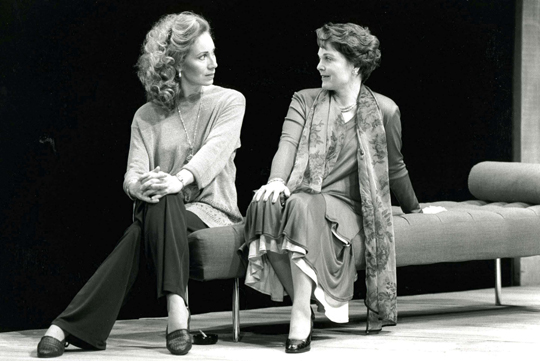 (L to R) Michelle Morain and Pamela Reed in the 1998 A.C.T. production of Old Times,
directed by Carey Perloff (photo by Ken Friedman)

“Pinter had immense respect for the mystery, the privacy, the ‘unknowingness,’ of the people in his plays. This is rare in a writer. Pinter knew that his characters were hidden, silent, often lying, always evading. His job was to listen acutely to what they were willing to say, and wait for the moment when their masks would drop.

“‘Between my lack of biographical data about (my characters) and the ambiguity of what they say lies a territory which is not only worthy of exploration but which is compulsory to explore,’ he said in a 1962 speech. Perhaps this is why Pinter’s plays don’t date. It’s like a conversation overheard on a bus: We catch glimpses of lives being lived, and we long to know more.

“Pinter understood in a profound way that humanity is an immense mystery and that his job as a playwright was not to provide answers but to strip everything away until, unexpectedly, something is revealed.” 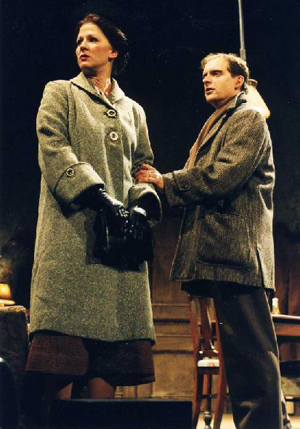 “You have to be religious about the language. Pinter is the absolute master of the menacing pause. Of the filled silence. When you first begin to work on a Pinter script, you won’t know why the silence is there. So you simply honor that silence and hold it until it begins to fill. It’s in those silences that you realize the depth of the characters’ loneliness, their need for love, their realization that their marriages are over. It takes weeks of rehearsals to fill those silences, but you have to honor the pauses, Pinter’s famous punctuation. Like Beckett, Pinter is a writer of enormous precision: most of his rewrites involve editing, stripping text away so that each moment has incredible resonance. So you have to listen to the soundscape of it very carefully.” 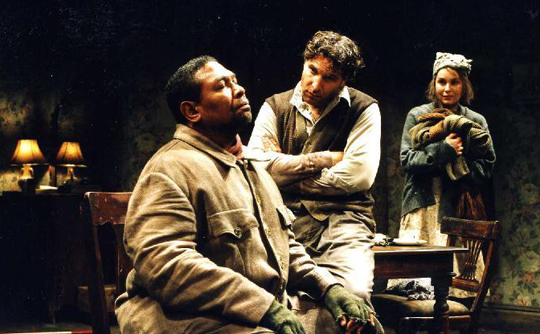 (L to R) Steven Anthony Jones, Marco Barricelli, and Diane Venora in the 2001
A.C.T. production of The Room, directed by Carey Perloff (photo by Kevin Berne)

“Working with Pinter in rehearsal was like being with a conductor searching for the exact note to be struck; he adored actors, being one himself, and knew what could happen, for example, when you let a complex performer have a moment of true silence onstage. . . .

“He loved acting with his back to the audience, just to raise the stakes. He loved changing the names of his characters halfway through the play. He loved double negatives that made the audience stop in its tracks, as when the best Jerry can say to his lover, Emma, in Betrayal is, ‘I don’t think we don’t love each other.’” 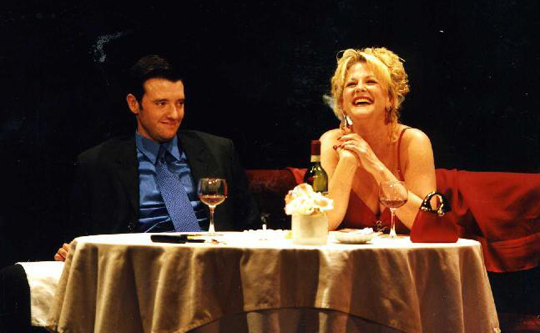 Jason Butler Harner and René Augesen in the 2001 A.C.T. production of The Celebration,
directed by Carey Perloff (photo by Kevin Berne)

“I first sat in a rehearsal room with him [in 1988] . . . just after I had given birth to my daughter, Lexie. I was directing the American premiere of his Mountain Language, a play about a political prisoner who has never been allowed to see his own baby. The presence of my own tiny child sleeping in the dressing room added an eerie reality to the proceedings. Pinter never allows you to be sloppy. His work is about being alert to the wonder and terror of each moment of life. It is filled with detail, precision, clarity, and surprise. It is unapologetic and unsentimental. And hugely exhilarating.” 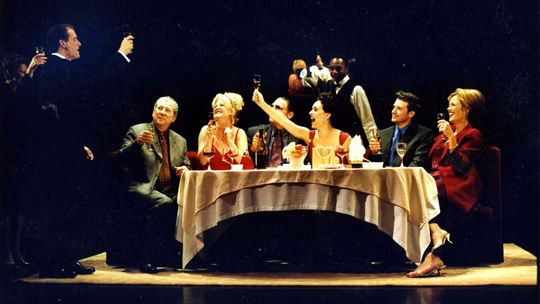