Situated on the banks of the Vistula River in southern Poland, Krakow is one of that country’s, and Eastern Europe’s, cultural centers. Dating from the seventh century, the city wears its history on its opulent sleeve: Renaissance, Baroque, and Gothic buildings fill the Old Town; venerable churches and museums abound. With a number of prominent universities, theater companies, and countless festivals, Krakow is an artistic and intellectual haven.

In 2009, San Francisco (another artistic and intellectual haven) and Krakow were named sister cities. Ted Taube, head of Taube Foundation, and Christopher Kerosky, Polish consul in San Francisco, travelled to Krakow on Mayor Gavin Newsom’s behalf to sign an agreement intended to open the road for business, cultural, and civic exchange between the cities. A.C.T.—which already sends two of its M.F.A. Program students to San Miniato, Italy, to train each summer and collaborates with theaters in England and Switzerland to develop work for young actors through the Young Conservatory’s New Plays Program—immediately began investigating this new opportunity for increased international exchange.

In December (during a snowstorm so severe in Poland that it made the local news here in San Francisco), that investigation bore fruit: A.C.T. Artistic Associate Carly Cioffi and M.F.A. Program Head of Physical Theater Stephen Buescher travelled to Krakow as A.C.T. emissaries, charged to take in as much of Krakow’s flourishing theater scene as they could in a whirlwind three days. With support from Taube Foundation and The Polish Cultural Institute in New York, Cioffi and Buescher were able to attend the third annual Divine Comedy International Theatre Festival and to visit Krakow’s foremost actor-training program, the Ludwik Solski Academy for the Dramatic Arts. Cioffi gives us a glimpse of thriving Krakow culture.

I am writing from the Steigenberger Hotel Franken-Langen, down the freeway from the Frankfurt airport, where Stephen Buescher and I have been shelved by Lufthansa after our plane was delayed and rerouted due to some crazy winter storms over here. We have been in Krakow this past week checking out the local theater scene. It has been a whirlwind trip, clouded slightly by jetlag and fierce weather, but fascinating and awakening all the same.

As some of you know, San Francisco and Krakow agreed to be sister cities beginning in 2009, and from the outset A.C.T. has been hungry to establish a connection between the two cultures via theater. Poland as a whole has certainly been very influential in the theater world for many years, but Krakow, specifically, has many great artists that call the city home, as well as many it can claim through history. It also has arguably the best advanced actor and director training program in Poland [the Ludwik Solski Academy]. It is also one of the most spectacular and unique cities I have ever seen, as it has maintained much of its original design and architecture, dating from the 14th century. No modern buildings, no traffic-filled streets. The city is designed around a gorgeous stone plaza surrounded by centuries-old buildings. Lots of long, narrow, cobblestone streets, underground restaurants and bars, and tiny old shops.

All of this, however, just proved to be a gorgeous background to the true discovery, which was the voracious and vibrant Krakow/Poland theater community as experienced via the Divine Comedy International Theatre Festival. The festival is running Dec 2–12 this year and is made up of performances by established Polish artists (to be judged for the festival prize), along with works by some young up-and-coming Polish directors, as well as many panels, talkbacks, discussions, and celebrations. Attendees of the festival included national and international artists, critics, and representatives of theaters and festivals primarily from Eastern Europe, but also from the U.K., Colombia, the U.S., and others.

We saw lots of interesting work, but the standout showing for me was a piece called Anhelli. The Calling, which was created by a company called Teatr ZAR from Wroclaw, who are new to me, but have performed fairly widely globally by now, which is impressive as they are only ten years old. The piece was extremely physical and full of music made vocally by the performers. It was directed by the artistic director of the company, Jaroslaw Fret, who is also the current director of the Grotowski Institute in Poland. The piece was short, only 50 minutes. It is the third installment in a triptych by the company called, in full form, Gospels of Childhood. I will save major details as we’ll all get a chance to see the full triptych in May 2011, when it’s brought to the San Francisco International Arts Festival!

Amid many other great experiences, the other huge standout was the opportunity to observe class at the Ludwik Solski Academy for the Dramatic Arts and see the fourth-year students present two different versions of Hamlet (one working from a linear cut of the text, performed by the drama students, and another devised version of the text performed by the dance-drama students), which serves as their thesis towards receiving diplomas. Both shows were performed together in one four-hour evening, which we discovered didn’t cause the average Polish theatergoer to bat an eye (cut to Stephen and me staggering down the street, bleary-eyed, frantically searching for a taxi to get to our next play of the evening!). Seeing all of these committed students doing such bold work amidst this rich theatrical community reminded me in many ways of our own community here in San Francisco, and it is wonderful to think of the stakes each of us is putting down in our own corner of the globe!

Seeing so much work over these few days and having the chance to discuss it with artists from other parts of the world raised lots of interesting questions about what is universally true about theater, versus what is true about theater right now, versus what is true about theater from region to region.
Finally, you all should know how welcomed we were by the organizers, artists, and guests of the festival. A.C.T. has such a wonderful reputation, and we were received with much gratitude and respect. It was also such a gift to share the story of our own rich, inspiring, committed community with all of these new minds. 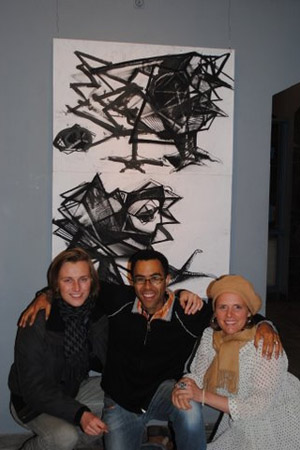 (L to R) Guide and translator Mateusz Mondalski with A.C.T.’s Stephen Buescher and
Carly Cioffi in the lobby of the Ludwik Solski Academy for the Dramatic Arts 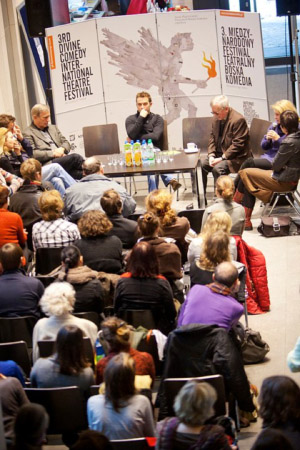 Director Jerzy Jarocki (center) in a postshow discussion of his production of Tango at
the Divine Comedy International Theatre Festival. Photo by Tomasz Wiech. 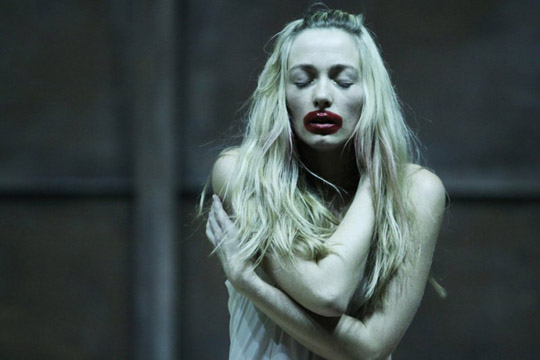