An Actor Reflects: The Intricate Choreography of Colonial Hong Kong

In December, First Look, A.C.T.’s program for new-play development, hosted celebrated director, choreographer, writer, and multimedia artist Ping Chong for a workshop of Bright Eye of the Moon, a new theater piece commissioned from Chong by A.C.T. A theatrical adaptation of a short story by 20th-century Chinese writer Eileen Chang (also author of the story that inspired the film Lust, Caution), Bright Eye follows Ge Weilong, a teenage schoolgirl in colonial Hong Kong, as she is led by her decadent Aunt Liang into a world of extravagance and vice.

Chong rehearsed his script with a cast of local and out-of-town actors that included A.C.T. core acting company member Jack Willis, Conservatory Director Melissa Smith, and second-year M.F.A. Program student Christina Lorenn Elmore. The cast delved into the intricacies of the script, with Ping revising the text each night based on the day’s work and on discussions with A.C.T. Resident Dramaturg Michael Paller. Under Chong’s direction, the actors also explored the rich physical life of two key scenes: a moment early in the play when Weilong (played in the workshop by Zoe Chao) petitions her estranged aunt (played by Jade Wu) for help to stay in Hong Kong when the rest of her family moves to Shanghai, and a later sequence in which Weilong surrenders to the seductive affections of George (played by Dion Mucciacito, who appeared at A.C.T. in Boleros for the Disenchanted), the layabout son of an influential family.

In early December I got the news from [A.C.T. Artistic Associate] Carly Cioffi that I’d been cast in the workshop of Ping Chong’s new play Bright Eye of the Moon at A.C.T.

Upon entering A.C.T.’s sixth-floor 99-seat theater, I was greeted warmly by fellow actors I'd seen or worked with in my years here in the Bay Area and by new faces from places such as San Diego and New York City.

Ping sat at the head of the table in an unassuming grey hooded sweatshirt with the sleeves rolled up, revealing beautiful, slender forearms and fingers that conducted his ideas to the group as he spoke. On the second day of the workshop, [Artistic Director] Carey Perloff stopped by to give Ping a vigorous hug and several rubs of his closely shorn head—a very sweet moment.

Ping had created a rich and complex world for the actors and the audience to enter into. To get a “feel” for the era in which Bright Eye is set, he showed us movies that featured family politics and class/status in a “traditional” 1930s–1940s Hong Kong home, as well as cultural and societal dynamics in the Shanghai public/private sphere.

Bright Eye is adapted from a short story written in the ’40s by Eileen Chang called “Aloeswood Incense.” It was interesting for me to work on a piece that is adapted from a piece of literature, and interesting to think about the difference between an Asian piece written by an Asian playwright and an Asian story told in a Western voice. Ping’s direction was very much like intricate choreography: “Light the cigarette and take a long drag before you give the other character your decision,” or “Turn your body a quarter turn before you proceed with the next line.” His stage directions paint lush environments in Hong Kong, which was at that time under British occupation and soon to experience the upheaval of war.

In the work of Wilde, Shaw, and Austen, societal constructs/constraints are often the source of conflict for the protagonist. Ping’s work similarly gives audiences a vivid perspective of Hong Kong during a time of huge cultural divergence: metropolitan/cosmopolitan Western influence vs. the traditional/conservative “Chinese way.” The generational differences of womanhood and self-reliance are beautifully played out between the young female lead character and the ostracized auntie she solicits for help.

The audience at the final reading very nearly filled the house. I had to leave immediately as the applause ebbed to catch the BART back to Berkeley, in order to make the call time for the show I was performing in—but still it was a lovely, lovely experience. Merry Christmas to me! 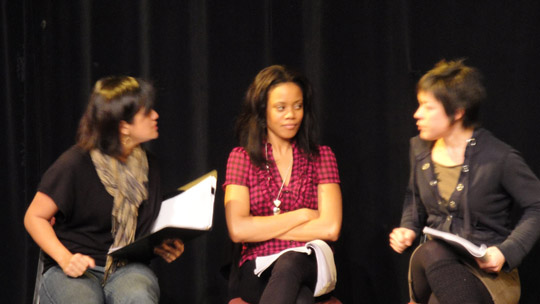 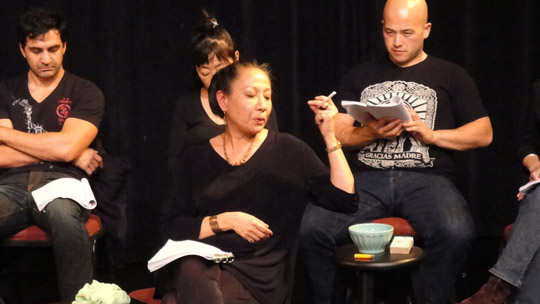 Jade Wu (center), as Aunt Liang, lingers over a cigarette during one of the presentation's
staged scenes. Behind her, (L to R) actors Dion Mucciacito, Keiko Carreiro, and
Michael Uy Kelly follow along in their scripts. 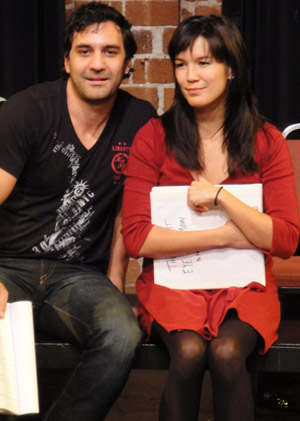