“You’ve Got to Solve That”

- December 10, 2010
An Interview with A.C.T. Conservatory Director and Head of Acting Melissa Smith

To begin one’s life as a first-year acting student in the A.C.T. Master of Fine Arts Program is to cultivate the virtue of patience. These young actors, some of whom have already performed professionally, spend their first three months in class, returning to the basics through improvisational exercises and scene study, before they get a chance to work on a play at the end of their first semester. And it’s not until the second semester that they get to perform in front of a public audience.

This week, the class of 2013 will present their work on their first play—a condensed version of American playwright and performer Deb Margolin’s Bringing the Fishermen Home— for an intimate audience of friends and family. Performances are open only to the A.C.T. community, an effort to create something of a protective cocoon in which the students can safely explore and take creative risks while testing their newly reinvented skills.

You might recognize Margolin’s name from news reports about a controversy that arose recently over her portrayal of Holocaust survivor Elie Wiesel in a new play, Imagining Madoff. In the play, Margolin depicts an invented encounter between the notoriously crooked Bernie Madoff and moral pillar Wiesel, who was one of the many victims of Madoff’s Ponzi scheme, trying to tease a kernel of understanding and meaning out of Madoff’s deceit. After Wiesel objected to Margolin’s portrayal, she was forced to rename the Wiesel character, though his attributes remained largely the same.

Choosing to write about difficult characters like Wiesel and Madoff is par for the course for Margolin. In her plays, the audience has access to the thinking of all of her characters: each of them has at least one long, juicy monologue—protagonists and antagonists alike. In Bringing Home the Fishermen, a surreal meditation on the doctor-patient relationship, we hear from, among others, the terrified patient, the doctor who tries to wall himself off, the old man who is perpetually sitting in the waiting room, and the maddeningly bureaucratic receptionist. This makes Bringing the Fishermen Home an ideal ensemble piece for the first-year actors: each performer gets to sink his or her teeth into a meaty role; no one actor alone carries the piece.

The play was selected by A.C.T. Conservatory Director and acting teacher Melissa Smith, who is for the first time directing the students she helped select for the program during their audition tour last spring. We sat down with Smith to talk about Margolin’s play, storytelling, and how to get young actors to think outside of themselves.

What is Bringing the Fishermen Home about?

“I believe I have already set down in my notes that Love greatly resembles an application of torture or a surgical operation. But this idea can be developed, and in the most ironic manner. For even when two lovers love passionately and are full of mutual desire, one of the two will always be cooler or less self-abandoned than the other. He or she is the surgeon or executioner; the other, the patient or victim.”
—Charles Baudelaire

Margolin really gets at the utter vulnerability of the patient in the hands of doctors, and the detachment doctors must achieve to be good at what they do. She’s exploring questions about boundaries, about patients’ desire for doctors to be more available, more personal, when doctors are trying to keep that kind of personal touch at bay because, if they get involved personally, they can’t do what they need to do. Particularly, say, a surgeon; particularly people in emergency situations. But life itself is an emergency.

What makes it a good first piece for the first-year students to work on?

The language of the piece is quite wonderful: it’s lyrical; it’s juicy; it makes me want to listen. So I responded to it both aesthetically and pedagogically. It’s useful for our training purposes in terms of asking the students to grab hold of words, to engage with juicy text. It’s not Shakespeare; it’s contemporary language, but it has great images. It’s an imagistic text.

We’re not doing a full production; we’re working on it as a classroom project. We open up the room for A.C.T. staff to watch, and I create the barest of environments for it. It’s a kind of expanded scene study, if you will, and an exercise in, an exploration of, storytelling and the actor’s role in storytelling.

Tell me more about storytelling.

We’ve had a lot of talk in the faculty about storytelling. One of the things that happens in acting, because you’re using yourself as a tool, is that actor training can become very self-referential. You’re very much in a bubble looking at yourself, at what your voice is doing and what your body’s doing: “I’ve gotta this,” and, “I’ve gotta that.” I, I, I, me, me, me. And you can lose sight, when you’re in rehearsal, of the need to play and the need to make things happen. You’re telling a story in time and space; you’re playing. That’s what a play is!

I’m having the actors share roles for this piece, and I think that’s very useful. If you share a role with another actor you have to be both subjective and objective: you have to keep backing up from the canvas, as it were. You have to pay attention and be willing to say, “What he’s doing seems to be working. Maybe I need to have more of that.” It also makes you realize that there’s more than one side to a character. I think young actors often get hold of something and get one dimension, but they don’t tend to think of other dimensions. This [split casting] forces them to think, “Oh, there’s more there than I thought.” My hope is that, if they can discover that by working with another actor, then when they have a role to themselves they’ll be reminded of the greater possibilities.

Obviously you have a lot of pedagogical goals for the production. What is it like to be both a teacher and a director at the same time?

I have to wear different hats. It’s natural for young actors to look to a director the same way they look to an acting teacher. So it’s natural for them to expect a director to solve things for them the way an acting teacher helps them solve things in class. But that’s not a director’s job; the director’s job has to do with the bigger picture. Part of my job [in this project] is to help them, because they are still learning, but at other times, I have to say, “You know what? You’ve got to solve that. You’ve got to figure out how to make that bigger. You can figure out how to make that real; I need you to cross to stage left.” 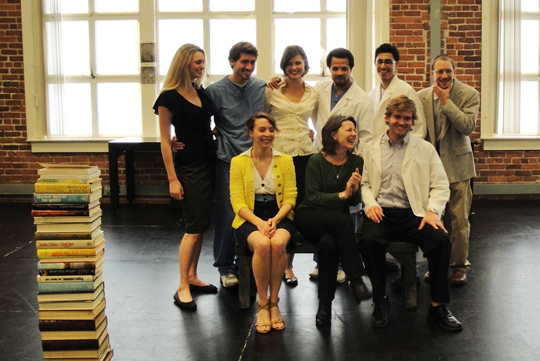