- December 15, 2010
This week, A.C.T. Artistic Fellow Jonathan Carpenter tracked down Christine Plowright, the “performance monitor” (a.k.a. kid wrangler extraordinaire) for A Christmas Carol, to get the inside scoop on life backstage with the brood of young actors that grace the A.C.T. stage each December.
—The A.C.T. Intern Blog Quadrumvirate

One of the most exciting things about A.C.T.’s annual production of A Christmas Carol is that it gives us a chance to feature actors from our Young Conservatory on the mainstage. This year, the cast includes 19 young actors, ages 8 to 13, playing almost 50 roles. The kids are incredibly cute, and they provide some of the show’s most memorable moments. While they more than hold their own with the Master of Fine Arts Program and professional actors with whom they share the stage, they’re still kids, and when the full cast of 40 actors is assembled, a little chaos seems inevitable. That’s where Christine Plowright comes in. As the performance monitor for A Christmas Carol, it’s her job to keep the YC actors in line from first rehearsal to final curtain call.

Christine has been involved in A.C.T.’s A Christmas Carol for five years, and, as you might expect, she has her fair share of stories. “I did have a Tiny Tim one time…” Christine muses. “It was a Tuesday performance, so we had been gone [from the theater] for a bit of time [since the Sunday matinee performance]. During the show, all of a sudden he showed up backstage with this hamburger from a take-out restaurant, and he was eating it. He had found it somewhere backstage, and it was left from days before. He didn’t get sick, but that’s the sort of thing that happens. All of a sudden there’s a kid eating a hamburger, and it’s like, ‘Where did that come from?’”

Another perennial source of stories is intracast conflict. “We did have an incident where word got back to me that so-and-so had bitten a fellow cast member. I had to pull that person aside and talk to her about it. She swore up and down to me that she didn’t bite her. And the next day, the kid that had been bitten brought the girl who bit her little wind-up chatter teeth. It was so funny. But then [the alleged biter] saw me, and she knew she had been caught.”

Christine is quick to point out, however, that for the most part the Carol kids are actually very well behaved. “We do quiet things [backstage]. We do puzzles, we get into a mellow routine. They come up through the Young Conservatory, so they know how things are around here. They’re serious about it.” Essentially, the YC actors are like a group of seasoned professionals. So instead of goofing off backstage, they find fun in annual traditions like the dressing room decorating contest. “They get very excited about that. One time we had an entire menorah made out of poker chips. One year, we had a group of boys who didn’t want to decorate, so they just did Christmas carols. Whenever people walked in, they sang.”

Christine’s very best story shows just how professional (and precocious) these young actors can be. “One of the younger female members of the YC and Tiny Tim had been getting to know each other throughout the production. One night they were sitting backstage, and I walked by and heard one of them say to the other, ‘So, do you work out?’ Tiny Tim brought her flowers on opening night; he was six. That sort of stuff always just tickles me.” 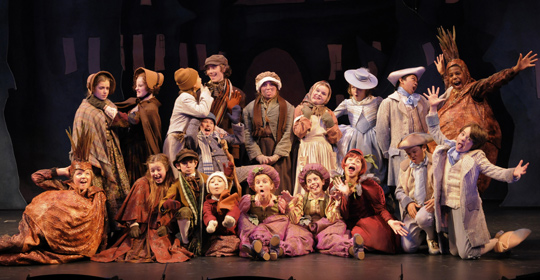