“I Have an Orchestra!”

Tom Stoppard and André Previn’s Every Good Boy Deserves Favour premiered in London as part of Queen Elizabeth II’s 1977 Silver Jubilee. Stoppard’s political play about government repression of free speech isn’t exactly jubilant, but it does have a certain majesty. EGBDF (the title is a mnemonic device for remembering the notes of the treble clef on a musical staff) calls for an onstage orchestra that is an integral participant in the performance; the original production featured Ian McKellen, Patrick Stewart, John Wood, and the entire London Symphony Orchestra.

The play’s protagonist, Alexander Ivanov, has published allegations that the Soviet government imprisons its political enemies in mental hospitals; for this, he is “diagnosed” with paranoid delusions and sent to a mental hospital himself. His cellmate, also named Alexander Ivanov, is genuinely ill; he thinks he has his own orchestra, in which he is the triangle player. The coup de théâtre of the piece is that this “imaginary” orchestra actually exists onstage, interacting with Ivanov and playing aloud the music that he hears in his head. So when the hospital’s doctor forces Ivanov to declare that he has no orchestra, the hypocrisy of the system is cleverly revealed to the audience—we can, in fact, see and hear Ivanov’s orchestra for ourselves.

Since EGBDF employs an orchestra in such a theatrical manner, it was an ideal choice for this year’s collaboration between the A.C.T. Master of Fine Arts (M.F.A.) Program and the San Francisco Conservatory of Music (SFCM). The eight members of A.C.T.’s class of 2012, now in their second of three years of intensive training in our M.F.A. Program, joined an ensemble of some thirty SFCM students to present the play-with-orchestra recently. As part of their “theater marketing for actors” curriculum, the cast members were asked to write about the process of staging this challenging and unusual piece.

Jessica Kitchens (Ivanov)
Ivanov is a schizophrenic with a personality disorder that makes him think he has an orchestra with him at all times—so he’s a large task for an actor. But I realized I was lucky: while most actors who get cast in delusional roles have to create their own alternate reality, I was actually going to have an orchestra with me onstage.

Once we started weaving the acting and the music together, it felt like my role began to bloom. My character speaks as much to his “imaginary” orchestra as he does to anyone else—I finally had my scene partner. When I chastised the cellos for their performance, they answered me with a sullen moan; when I mocked the horns, they squawked back at me. I developed specific relationships with the different musicians—intimate relationships, since they are my character’s best friends and worst enemies. This piece fluidly combines theater and live music; I’m fortunate to be playing the one character that lives in both worlds.

Maggie Rastetter (Doctor)
I’m no stranger to orchestras. During my teens, I was in the pit with the basses, violins, oboes, and bassoons as a vocalist for the Oregon Ballet Theater in Portland. This early experience gave me not only a deep love for classical music, but also a reverence for those who can play it. I don’t define myself as a musician any longer, though. In the A.C.T. M.F.A. Program, I’m learning how to define myself as an actor. At first, each new play and new discovery in this process can feel foreign. But Every Good Boy Deserves Favour, a play with an orchestra, was a beacon of familiarity!

Once we started rehearsals with our charming-British-gentleman director, Giles Havergal, I realized how intricately woven this script is. The music and the action have to be timed perfectly. I didn’t feel entirely confident when I walked into our first rehearsal with the live orchestra.

And there they were—these young musicians, at around the same point in their studies as we are, handling their roles like pros! These students. Were. Impressive. I felt like I was stumbling through the show, trying to get the timing right. But then I realized, “Oh, I still have to think like a musician. I have to know my rhythms, know my pitch, and play my part in the ensemble.” The musicians, too, had to think like actors; in this play, they are storytellers just as much as we are. I felt as if I had unlocked a little secret about this show—the music and the drama don’t just fit together, they carry each other!

During this challenging time in my training, this show reminded me that I am not simply one thing or another. As an actor, I’m defined by all of my former experiences—including my time as a musician.

Jason Frank (Doctor)
I was thrilled by last year’s [A.C.T. and SFCM] coproduction of [Igor Stravinsky’s] The Soldier’s Tale; the combination of actors and orchestra created a kind of life and energy onstage that I had never experienced before. I got another taste of this when we read Every Good Boy Deserves Favour aloud for the first time, listening to the orchestra tracks on a stereo in between scenes. Even hearing Previn’s music through tiny speakers gave me clues about the size of this performance piece, the magnitude that Stoppard’s text requires.

Then, when we had our first rehearsal with the full live orchestra, I was simply blown away. The last time I’d heard orchestral music played by people my own age was when I was in eighth grade and I played B-flat clarinet. Needless to say, the [SFCM] students were much more impressive than my eighth-grade band. As I watched the violinists’ bows fly up and down, tried to keep pace with the fingers of the woodwind players, felt the vibrations of the timpani in my bones, and stared in amazement as the harpist found and perfectly plucked each string on her beautiful instrument, I felt like I understood the combined potential of this play of Previn’s moving music and Stoppard’s wry text.

Alex Crowther (Teacher)
As I write this, we are less than four days away from the opening (and closing) night of Every Good Boy Deserves Favour. The show’s two-week rehearsal process is one of the shortest I can ever remember having. Somehow, though, the lines are memorized, the scenes are blocked, and now we are working towards integrating ourselves with the beautiful 30-piece orchestra that plays with us throughout the piece. Last week we were rehearsing by ourselves, trying to learn our cues by speaking over a recording of the original production . . . but the play becomes a different experience when the music is live and surrounding you. It’s bigger, more powerful, and the presentational style of performance that we’ve been developing makes more sense to me. I’m also thankful for no longer having to compete with the voices of Patrick Stewart and Ian McKellen . . .

Christina Elmore (Sacha)
Rehearsals are the key to any production. What the audience sees as magic onstage is a result of the actors, directors, and the ever-so-important stage managers spending hours, weeks, and sometimes months trying to conjure and bottle the magic that we hope to pour out during performance. In the rehearsal room, we have the freedom to play, take risks, fail, and try again. Generally, rehearsals last for four or five weeks—and that never feels long enough. That’s probably a good thing; we should always want to dig deeper. But the longing for the safety of rehearsals never does go away.

So when we were told that we would have only two weeks to rehearse Every Good Boy Deserves Favour, I was nervous to say the least. Would we really be able to pull this off, or would we have to rely on the brilliance of the orchestra to drown out our shortcomings? How would we not only learn the lines, blocking, and cues, but also grasp the meaning of this precious piece? These questions haunted us before we began. But by the time we auditioned, got cast, and started our first rehearsal (all within 24 hours), we realized there would be no time to dwell on them. We had to get to work.

It’s been a whirlwind. We’ve just tried to walk into each rehearsal and seize the opportunity to make bold choices—and trust that the magic will happen. 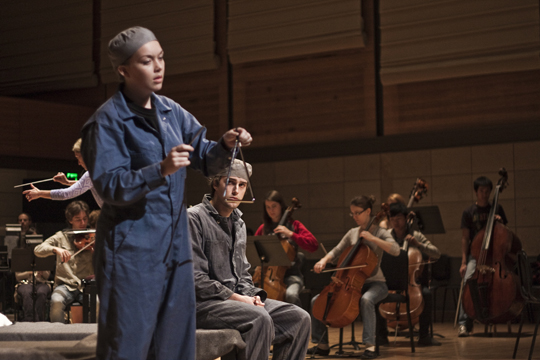 Jessica Kitchens (with triangle) as Ivanov and Matt Bradley as Alexander, with members of
the San Francisco Conservatory of Music's New Music Ensemble 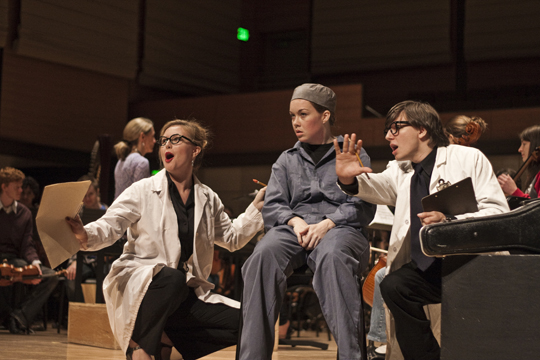 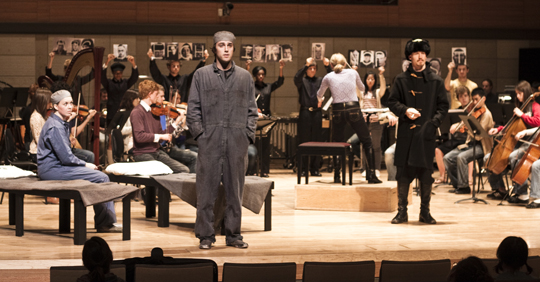