A Wild Ride with the YC

A.C.T. Young Conservatory students are sharp. We’d heard it from everyone: YC Director Craig Slaight; Karen Hartman, author of Wild Kate (a new play commissioned by the A.C.T. M.F.A. Program and YC); the M.F.A. Program students who’ve worked with them on conservatory coproductions and in A Christmas Carol. So when we knew they were in the building rehearsing Wild Kate, we didn’t want to miss the chance to let them weigh in on young actor training and the dark hilarity of Wild Kate’s nautical adventures. Naomi Kunstler, a junior at Convent of the Sacred Heart high school, pulls us into the nitty gritty of rehearsal as only a true actor could.
—The A.C.T. Intern Blog Quadrumvirate

The first day of rehearsal I’m sitting in my chair during our line-through and I can barely stay in my seat I am so excited. The room is packed with the cast, crew, playwright, director, lighting designer, sound designer, choreographer, etc., and I am already so thrilled to be part of a production like this. I skip to the bus stop, and the second I get home blurt out to my parents all the exhilaration that I can no longer contain.

This may seem like the sort of enthusiasm that would be short-lived, but it has lasted through the whole rehearsal process. All of the students in the Young Conservatory cast have discussed our impatience every day as we sit in our classrooms at school and count down the number of hours, minutes, and seconds until we get to leave classes and go to rehearsal.

It is rare that young actors of our age are given the opportunity to work with older and more experienced artists. In addition to YC students, the cast of Wild Kate includes students training to get their master of fine arts degrees. Collaborating with the M.F.A. students and working with a professional director like W. D. Keith for the first time has most definitely boosted my creativity. Their professional and life experience has given them the ability to imagine ways to add to productions, ways that someone with less exposure would never come up with.

Wild Kate, based loosely on Moby Dick, takes place on a small boat. My character, Nia, is a pregnant 17-year-old. Pregnant and seasick is really not a pleasant combination. Giving the illusion that the whole play takes place on a moving boat may seem simple; however, this is in no way the case. First of all, you can’t just start moving along to the motion of the boat when you happen to think of it; you have to do it constantly, no matter how absorbed you are in the scene. One of the main struggles was making sure that everyone was swaying the right way. If even one person is off the viewer is no longer convinced that we are on a boat. So we spent hours rehearsing this, picking one person in each scene to lead the wave action and scaling the intensity of the wave action for every scene on a scale of one to five. We even had a choreographer come in and work with us multiple times, because in addition to staying in sync we also had to make sure that we weren’t anticipating the waves, but that they were really throwing us off balance.

In the peak scene of Wild Kate we are in the middle of a vicious storm. While staying in the intensity of the scene, we violently throw our bodies around and grab onto whatever we can find to “maintain balance.” This took a lot of work; however, the second that we got into the Zeum Theater and saw the set, everything felt real. I still feel the thrill we got when we first laid eyes on the mock boat that up until then had only existed in our imaginations. Like four-year-olds, the whole cast started jumping up and down, and we had to contain ourselves to resist running onto the set before we were permitted. We later found out that the set was even designed to make squeaking noises when certain planks were stepped on, in order to make it sound like an old boat.

Of all the shows I have been in, what makes Wild Kate unique is that we are the first people ever to perform this play. When I am asked what show I have been working on, shudders of excitement run through me as I say, “Wild Kate: it’s a world premiere.” Being the first ever to rehearse Wild Kate means that I am the first ever to play the character of Nia, as is the case for the rest of the cast and their characters. There is no way I could fall into the trap of being influenced by the choices of another actor taking on the same role, so my creativity is at its sharpest. At first glance one might see my character—as well as all the other struggling teenagers who have embarked on this boat because they can no longer handle their lives at home—as comical and shallow. In reality, though many of the characters have humorous sides, these teenagers are here because they are deeply troubled and unstable. We had the incredible chance to embrace and dissect characters that had never before been touched. 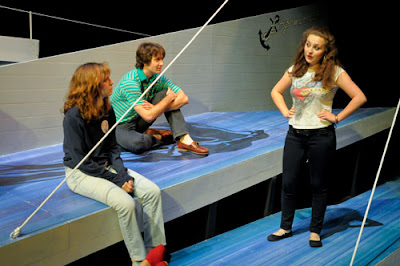