"The Secret of the Sweets": An Interview with Marcus's Richard Prioleau

- November 19, 2010
Third-year A.C.T. Master of Fine Arts Program actor Richard Prioleau is a busy man: he’s in rehearsals for A Christmas Carol and going to class in A.C.T.’s studios each day, while playing the title role in Marcus; or The Secret of Sweet on the mainstage each night. Still, last week he found time to sit down with A.C.T. Dramaturgy Fellow Zachary Moull—who worked as assistant director on Marcus—over lunch (salad and noodles) to talk about the urgency of Marcus, the joys and challenges of acting in Tarell Alvin McCraney’s play, and the musical proclivities of its cast.
—The A.C.T. Intern Blog Quadrumvirate

Your lunch looks very healthy. Do you have any routines or strategies for keeping your energy up?
No, I just have to remember to drink lots of water. I stopped going to the gym regularly because of the time constraints. But Marcus is 16, and he shouldn’t look like a football player, anyway. I do have preshow rituals: get there an hour before curtain, make sure I shower and warm up, and then go and talk to Shinelle [Azoroh, who plays Osha] and Omozé [Idehenre, who plays Shaunta Iyun]. Talking and laughing with them is imperative for me. I usually make an excuse to go see them, but it’s just to laugh.

What was the first thing that grabbed you about Marcus?
The wonder, the seeking. He’s on a quest, an underdog Odysseus-like wandering. He’s trying to figure out the answer to something that is missing within him. I think anybody can identify with that.

Tell me about developing Marcus’s physicality. It was a gradual process?
[Director] Mark [Rucker] kept encouraging me to be freer. I knew that my weight was a little heavier than the Marcus I have in my mind, so I wanted to find the lightness in [the character]. [I’m telling the physical story of] Marcus trying to be free. I couldn’t do that work until I was off book [knew all the lines by heart], until I knew what the play was, until I felt comfortable with everyone in the room. I wanted to give myself the time to do that, and Mark was great about it. He let it arise, instead of having me forcing some physicality on the play before I knew what it meant.

You’ve been performing publicly for two weeks now. Marcus speaks his lines out to the audience a lot. Has the character changed now that you’re actually in front of an audience?
He’s more fun. I think I discovered the humor in it, in interacting with the audience, more than I ever did in the rehearsal room. Especially last night, when [Shaunta Iyun’s] sandwich rolled off the stage.

What’s it like to be onstage during a moment like that?
When the sandwich fell off the stage . . . [laughs] Those moments are the reason why we do theater. In that moment, nothing is planned. We just have to react to what the audience is doing. Because if we ignore the moment, there’s a falseness.

And you didn’t ignore the moment. You both thanked the gentleman in the front row who tossed it back up to you. And then Omozé changed her exit line to, what was it?
“Damn, boy, made my sandwich roll right off the stage.”

Killer line.
Audiences choose theater because it’s live. The audience and the actors are living and breathing together. [When these accidents happen], we become more attuned to the fact that we’re all doing the same thing, all seeing the same things. We’re all here in the same space, and nobody knows what’s going to happen. Nobody can control when a fake sandwich will roll off the stage.

Speaking of unpredictability, have you been surprised by any of the audience reactions you’ve seen so far?
They’re so different from night to night. Each audience is like a different person. So I’m having the same conversation, but with a different person. That makes it fun for us, because we don’t know how this “person,” as a whole, is going to react to the story we’re telling them. It means that I’m never the same from the afternoon to the evening performances, or from one day to the next.

Tell me about the stage directions that you speak to the audience.
It’s hard, because as an actor you want to be in the moment from moment to moment. But Tarell wants you to stop, face the audience, highlight the moment, and then go back into it. You tell the audience, “Hey, look at this! Look what I’m about to do!”And then you do it. The flow of that is jarring at first. You have to really stop and take your time. Now, because we have it in our systems, it helps us make moments land. And it makes us have to deal with the audience right away, which is scary for us and for the audience. But when we enjoy those moments together right from the start, it builds a connection.

A broader question now: Why is Marcus urgent?
I think it’s urgent in light of all the [recent LGBT-teen] suicides, the bullying, the crisis with Proposition 8. The lives of gay men, black gay men . . . they’re not brought to the surface at all. I think it’s important that everyone hears [Tarell’s] voice. Hears that there is a cry, that there is a need to hear and listen. People struggle with their sexuality because it’s not being talked about, and that can be traumatic. So Marcus challenges its audience to see things that they might not usually see or talk about. It also brings in young people, which is wonderful. That’s our next generation of theatergoers.

How would you have responded to this play if it had existed when you were 16?
Oh my gosh, just to have seen people that were like me onstage, it would have . . . I don’t know. It’s such a blessing to have right now. I spent a lot of time not knowing [that plays like Marcus] could exist, wanting to see more people who looked like me and behaved like me on the stage. Maybe I would have pursued theater more quickly? Maybe more people of color would be on the stage? I mean, I’m here, so something happened somewhere. But I think if more plays like this had been done longer ago, it might have changed how we see people.

You’ve been doing a lot of interviews recently. What questions would you like to be asked more about your work?
What it’s like to work with the other cast members. The ensemble is so important for this piece.

Tell me about that.
For me, this has been—by far—the most joyful experience I’ve had working on a play. By joy, I mean the laughter, the smiles, the insights, how we respond to each other. I trust that each person has me, so being Marcus doesn’t feel daunting. We’ve all taken on this beast together. It’s really easy to get up onstage when you have that kind of support.

You’re a very close group. I’ve noticed that you break into song a lot . . .
[laughs]

Why do you think that is?
Because there’s music in the show. But even if there wasn’t, we’d probably do it anyway. It’s useful, because you can listen to a song and it brings you back to when you were 12 and you first heard it. None of us in the cast are 16-year-old kids, but we all have those markers in our lives that we draw upon. Like in the play: Ralph Tresvant, Usher . . . music sets off a trigger, takes you back to who you were.

What would you call this band?
The Sweet. The Sweets. No. Yeah. “The Secret of the Sweets.” 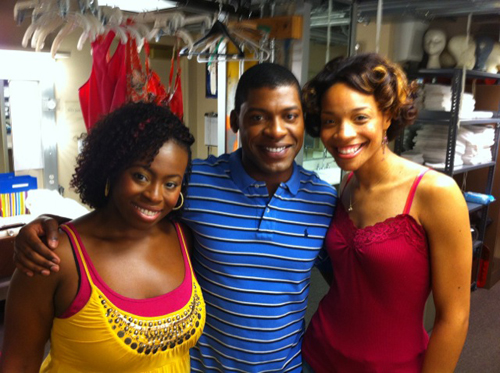