Marcus: The Poster, The Process

You may not have seen A.C.T.’s production of Marcus; or The Secret of Sweet yet, but odds are that you’ve noticed a certain mysterious, enigmatic image following you around town. In your newspaper, on BART, or in a shop window, a young black man with an otherworldly glow about him and a heart-shaped explosion of water over his chest stares back at you. His eyes are full of something. Maybe his gaze unsettles you. The man is Richard Prioleau, member of the A.C.T. Master of Fine Arts Program class of 2011 and star of Marcus, and the poster design is by Amelia Nardinelli, senior graphic designer at A.C.T. The poster has such an iconic presence it takes a moment to remember that it was created by a particular person. But created it was, and below Nardinelli lets us into the world of her process.
—The A.C.T. Intern Blog Quadrumvirate

I always begin the design process with a brainstorm, or in the case of Marcus, a brainhurricane, of things I associate with the play. What are the underlying themes, who are the characters, and what kind of environment do they live in? I speak with the marketing team and the director, I look at set and costume designs, and I do a lot of sitting and staring out the window, thinking about how I can get a three-dimensional world full of people, sounds, and shifting light onto a piece of paper.

For the design of Marcus, I decided to start by focusing on two elements: Marcus (the main character) and water. I imagined those elements coming together to tell the story of Marcus’s self discovery. I wanted to express shyness and vulnerability, mixed with intense release. I also wanted the viewer to feel a hint of discomfort, as if they’d walked in on someone experiencing a very personal thing, like praying or looking in a mirror. Tall order.

With New Orleans’s Rebirth Brass Band blowing through my headphones, I looked at paintings, photographs, textures, type, ephemera: anything that supported any of my keywords. I looked at Robert Mapplethorpe for his arresting, sexual, black-and-white portrait photography; Lewis Watts for his raw, documentary-style photos of African Americans in New Orleans. I looked at Kehinde Wiley’s urban, poetic paintings of young African American men in wifebeaters and stiff-rimmed baseball caps standing in front of delicate floral prints. I decided that a striking portrait of Richard Prioleau, the actor who plays Marcus, was the way to go. [Amelia gets excited, nervous.] 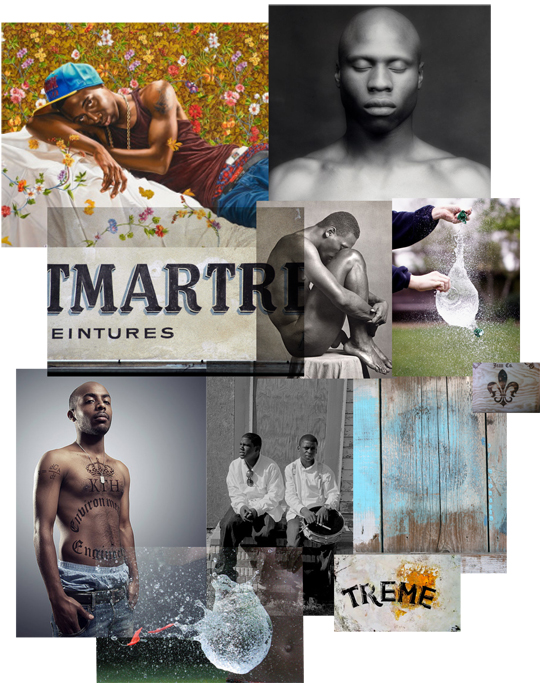 Now, how would I incorporate water? Is he soaking wet? No, too sexy. Is it raining? No, too hard to photograph. Is he floating in water? Too morbid. Water, water . . . how else could I incorporate water? More sitting and staring out of the window ensued. I thought about vehicles that water travels in: hoses, buckets, balloons. A water balloon hitting his chest? With excitement, and a little skepticism, I looked up water balloon photographs on Flickr and was overjoyed to see that many people had captured water balloons mid explosion, giving the water a dynamic, ethereal quality.

I threw together the elements I had come up with so far and presented my concept to Janette Andrawes, A.C.T.’s director of marketing, and to the director of Marcus, A.C.T. Associate Artistic Director Mark Rucker. They liked the tone and felt that it represented the integrity of the play. [Amelia exhales, smiles.] 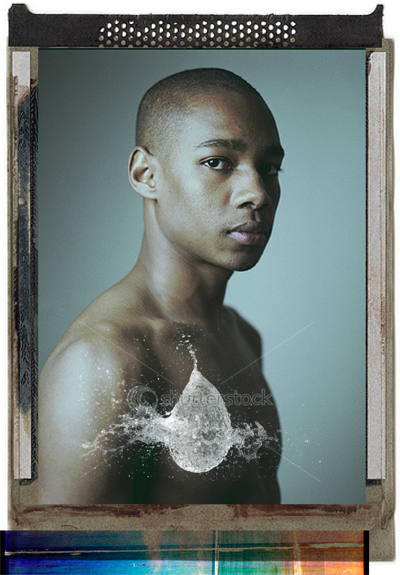 First draft of the poster for Marcus; or The Secret of Sweet: portrait of a man from
www.fffflckr.com; frame and water balloon from www.istockphoto.com.

Janette and I art-directed the photo shoot. Richard Prioleau brought vibrancy, charm, and a photogenic quality that even Tyra Banks would appreciate. Kevin Berne, our photographer, lit the room perfectly and captured a wide variety of expressions and poses. 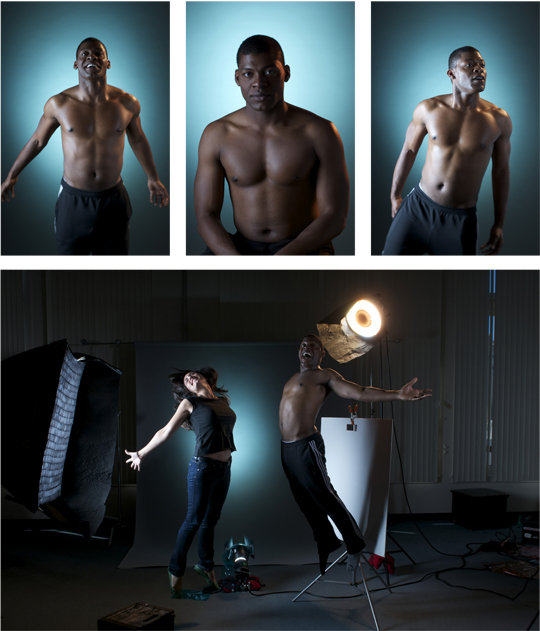 Back at the computer, I purchased a water-balloon-bursting image from an Italian photographer on Flickr and manipulated it in Photoshop to look like a heart (a last-minute decision), echoing Marcus’s quest for self-acceptance and love. I laid it on top of the chosen shot, and there it was: Mythical. Gritty. Sexual. Urban. Sweet. Lyrical. Wet. Raw. Dreams. American. Ten out of fifteen ain’t bad. 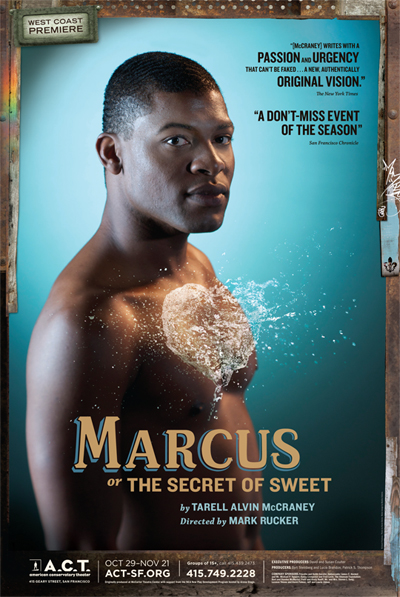