- November 17, 2010
posted by Jared McNeill, cast member of Marcus; or The Secret of Sweet

Jared McNeill’s role in Marcus; or The Secret of Sweet may not be huge, but his onstage presence is enormous. As Terrell, the obnoxious-but (in McNeill’s hands)-loveable dude who follows Osha and Shaunta Iyun around in the first act, McNeill has the audience in stitches, especially with his bit about white chicks in horror films. This is not McNeill’s first time charming audiences in a Tarell Alvin McCraney drama. In fact, he has appeared in all three of the Brother/Sister Plays. After playing Oshoosi Size in City Theatre’s production of The Brothers Size in Pittsburgh, PA, and Elegba in In the Red and Brown Water at Marin Theatre Company (MTC), McNeill has the unique perspective of having lived and breathed McCraney’s entire cycle. Below, he describes that experience for us.
—The A.C.T. Intern Blog Quadrumvirate

The Brothers Size was my first show coming out of Fordham University, and it came after a good deal of kicking around doing odd jobs and such in NYC. I remember I was having difficulty deciding what I wanted, where I wanted to go, and what I was gonna do when I got there. I say that not to imply that I’ve made any sustainable progress in those areas, but rather to say that the search for identity in a larger world—the desperate yearning that Oshoosi Size exhibits in that play—was very present for me then, so I was able to exorcise some very immediate demons in working on the piece. 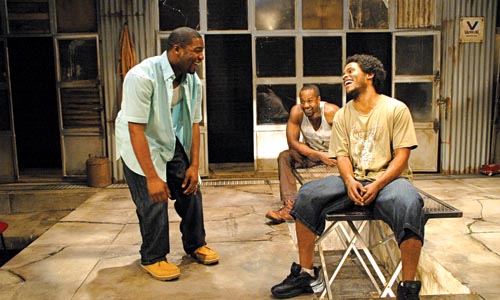 What I loved about playing Elegba [in In the Red and Brown Water] was the challenge of growing throughout the piece, of vacillating between high comedy and dramatic work. I thought then, and now know, that it takes a lot of control and trust to play “unhinged” to any degree, and when I was at MTC I was ready to at least try to find that. I figure, if you know what challenges you want to conquer going after a role, it’s easier to come somewhere close to what you imagine, even if you never quite get there. 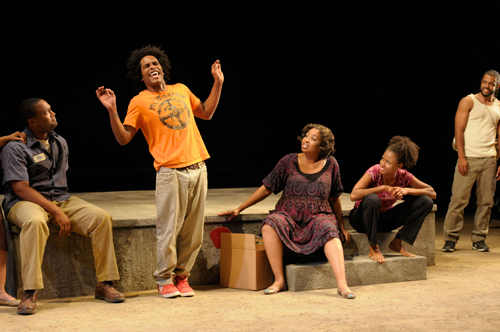 (L to R) McNeill as Elegba, with Dawn Troupe, A.C.T. M.F.A. Program alum Lakisha Michelle May, and
Daveed Diggs, in Marin Theatre Company’s In the Red and Brown Water (photo by Kevin Berne)

It’s proven to be quite a remarkable opportunity to work on the third play [Marcus; or The Secret of Sweet at A.C.T.] and finish out my experience with the cycle, because, besides being part of an amazing and rare force of cooperation and collaboration here in the Bay Area, I find that these plays, in general, carry with them and inspire something very special that isn’t found everywhere: an inherent sense of community among the acting company, a sense of group and individual self-reflection, and a simultaneous sense of play and importance and immediacy. I say this because I’ve been able to work on all three plays, and all with different companies at different times, and the result has been that same magic of truth and poetry and dreamscape and hyper-realism. All of these things could, if crafted less expertly, present a mash of contradictions; but they don’t. It’s nice, as an actor, to sit back and relax into McCraney’s words. It’s almost like you don’t have to find them on any given night. You just let them funnel up and out as they choose.

I feel closest to whatever character I’m portraying at the time. I think we actors all have a bit of the folk we play inside us. Who we are today is just a collection of who we’ve been up ’til now, so whoever it is in me that speaks to a certain role at that time is what comes bubbling to the surface. I think that speaks to the power of these plays to evoke very human, very connected parts of ourselves.

Though the [theater] spaces are very different and present various challenges in staging and voice and intimacy, the directors I’ve worked with on these plays [Robert O’Hara, Ryan Rilette, and Mark Rucker, respectively] have been very aware of that. There are many ways that the three directors have been different, but where they all align is in their permissiveness in the rehearsal room with regard to experimentation and exploration. Basically, nothing is so damn dumb that you can’t try it once. Sometimes twice. That’s a really freeing and engaging way to work, and, especially working with language that can sometimes be very open to interpretation of rhythm and play, it makes for a unique show that really belongs to the company.

The best part of it all for me has been to watch and learn from amazing actors weaving action through the poetry of the language. You can do a scene from these plays 10 times in a day and come to 100 new revelations. The joy for me is definitely in the playing, but in the long run I think I’ve gotten more out of the watching. 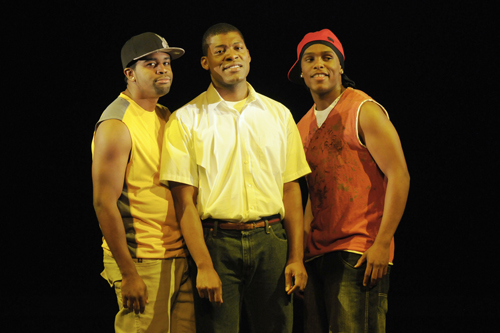