If you were at the October 2 matinee of Scapin, then you were lucky enough to catch third-year M.F.A. Program student Richardson (aka Rob) Jones performing in the role of Sylvestre, Bill Irwin’s lovable sidekick. If you didn’t catch him: Rob is tall as anything, rail thin, with a deep baritone voice and a killer deadpan. We were dying to know what it was like for an understudy to finally get onstage—and next to Bill Irwin (intern crush!)—so we tracked Rob down and he told us: it was awesome.
—The A.C.T. Intern Blog Quadrumvirate

When I heard that Bill Irwin would be casting M.F.A. students in his production of Scapin, I wanted so badly to be a part of it. I’ve loved his work since I was a child and knew that if I could get in the room with him it would be the greatest professional and learning experience of my life. I couldn’t have been more right.

During my first year in the M.F.A. Program, Bill Irwin did a reading of Scapin that had me, and the entire room, in stitches. I can’t remember the last time I laughed so much. I left the reading full of joy and went to a rehearsal of the one-act we M.F.A. students were working on: Almost, Maine, directed by René Augesen. Just as we were about to go into my scene with Stephanie DeMott, a scene rife with physical comedy, in walked Bill Irwin. I was exhilarated and terrified. Lucky for me, and for everyone, Bill is one of the kindest and most supportive men in the industry.

During the entire audition and rehearsal process for Scapin, Bill kept a presence of warmth that made working a total joy for everyone. The way he works with such brilliant ease makes every tiny movement—the smallest eyebrow lift—absolutely hilarious. It was astonishing to watch. It also didn’t hurt to be around people like Geoff Hoyle [former member of San Francisco’s Pickle Family Circus and the actor playing Geronte], Kimi Okada [movement consultant], Anthony Fusco [A.C.T. core acting company member and assistant director of Scapin], Kimberly Webb [stage manager], and the brilliant company of actors, musicians, designers, and stage managers. Such pros! It was a dream!

An understudy has his or her own set of responsibilities. I knew that I would be going on, but I also knew that the hilarious Sylvestre that was coming forward in the rehearsal room was not mine, it was Jud Williford’s. It was my job to give Jud’s Sylvestre life, even though he and I are very different actors. At first I didn’t know what to do, so I looked back on my training. One of the major points of training that A.C.T. has instilled in me is to be present and to show myself: I am the one up there onstage, and there’s no way around that. (It sounds simple, I know, but opening up and showing myself has been one of the most difficult things for me to learn.) In the end, I decided that I would just do everything that Jud does, but do those things the way my Sylvestre would. Jud was so great to watch. He was always pushing things forward in the funniest ways. He was also incredibly supportive and offered a lot of guidance and insight into the role.

The day I performed the role on the stage of the American Conservatory Theater was wonderful; I’ve never had so much fun. I think the beard trick was my favorite part of performing the role. Everything about that scene is so outrageous, and being able to play in such an out-there way while still being closely connected to Bill was stupendous. Also, taking a huge sword to your own face is surprisingly fun onstage. Being on that gorgeous stage with Bill Irwin, a man who has more gifts than I can name, was the greatest thrill of my life. I was in brilliant hands; the entire company was absolutely fantastic. And there was finally that last and vital element: the audience! With their laughter and their silences they told us exactly what the rhythm of the comedy needed to be, and they became the legs to stand on. All the work that we put into comedies is never really realized until the audience shows up. 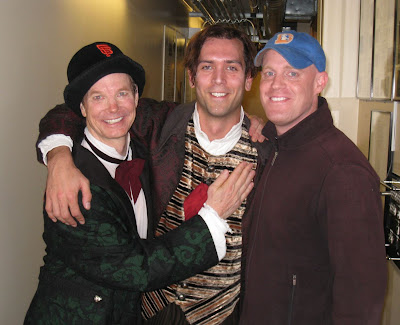