Interns in the House!

It’s fall in San Francisco, the 2010–11 season is steaming ahead, and it’s back-to-blog time for us here at A.C.T. So much is happening that we want to share with you; the building is packed with artists darting in and out of rehearsal rooms, and we want to grab each one of them, plop them down at a computer and say, “Write! People are listening!”

But who is this “we”? Who are the new helmsmen of the A.C.T. blog—the voracious chasers of information, actors, directors, free pastries? Enter the interns: Emily Hoffman, Jonathan Carpenter, Zach Moull, Christine Miller—publications, artistic, dramaturgy, marketing.

This intern quadrumvirate will be your eyes and ears backstage at A.C.T. The people we meet! The things we see! You’ll get it all, and without having to do any of the photocopying or coffee-fetching (just kidding—A.C.T.ers get their own coffee).

Each week, we’ll bring you the voice of someone from the A.C.T. family (like Carey Perloff, our intrepid leader; Richardson Jones, a third-year student in the M.F.A. Program, who got to play opposite Bill Irwin in a matinee of Scapin; and someone special from the cast of Marcus; or The Secret of Sweet, just to name the first few posters we have on deck). But first, so you know who’s talking to you, some introductions:

EMILY (PUBLICATIONS) is a New Yorker, born and bred, who’s come West in search of greener pastures. She graduated last spring from Yale, where she concentrated in English and women’s, gender, and sexuality studies and directed a number of plays, her favorite of which was The Hamletmachine by German playwright Heiner Müller—a six-page, practically unstageable adaptation of Hamlet which Müller called “the shrunken head of the Hamlet tragedy.” At A.C.T., she writes articles for mainstage programs and Words on Plays, helps out with literary management and new play development, and collects millions of bios.

Why theater? “It gives you license to stare. More seriously, though: it’s live. It’s a fiction, of course, but there are real live people standing there in front of you doing things to each other. It’s that double layer—the artifice, and the real, living beings underneath—that, in my mind, makes theater so radical. Especially in a world of increasing mediation and isolation. It’s why I can’t turn to the movies, even though they’re so seductive in their own way.”

ZACH (DRAMATURGY) took the long road from Toronto to San Francisco, having spent six years in Halifax on the far coast of Canada. He studied philosophy and theater at the University of King’s College, and then worked variously as a theater bartender, a teaching assistant, and the production manager for a local opera company. But he spent most of his time, really, making sketchy plays with wonderful people. Not wanting to cross the continent all at once, he stopped over at the University of Chicago last year, where he took part in playwriting and solo-performance workshops while writing about modern-day adaptations of Greek tragedy.

Why theater? “To the question ‘What are poets for in a destitute time?’ the German philosopher Martin Heidegger once answered that poets are ‘the sayers who more sayingly say.’ I know that I will never know exactly what he means by this. I would venture, though, that on its very best nights the theater helps us more livingly live. Poetry pushes past the limits of language to more urgently express our condition; we can do something like that but on our feet. I doubt I’ll ever know exactly what I mean by this either. But knowing would be less fun.”

JONATHAN (ARTISTIC) had never lived outside of New England before starting at A.C.T. but is happy to find that San Francisco already feels like home. He graduated from Harvard in 2007 with a degree in organismic and evolutionary biology but maintained a strong connection to the arts. He spent much of his time at Harvard singing with the Din & Tonics and rekindled his passion for theater in his senior year, when he directed I Love You, You’re Perfect, Now Change. Before coming to A.C.T., Jonathan worked in the development office at M.I.T. while continuing to act and direct in the Boston area. Jonathan’s work at A.C.T. will expose him to a wide variety of the artistic department’s endeavors, from casting, to literary management and new play development, to assistant directing. He also tweets for A.C.T. under @ACTBackstage (http://www.twitter.com/ACTBackstage)!

Favorite plays: Macbeth (Shakespeare), Angels in America (Kushner), A Streetcar Named Desire (Williams), The Importance of Being Earnest (Wilde), Into the Woods (Sondheim), Six Degrees of Separation (Guare), and The Marriage of Bette and Boo (Durang).

Why theater? “I’ve always had an innate, unshakable drive to see and be involved with as much theater as possible. I’ve tried to pinpoint that impulse as I’ve gotten older, and I’ve found that it has to do with theater’s power as a tool to investigate our world. Each new script raises new questions that artists get to explore in the rehearsal room. Then, performances open up the line of inquiry to a larger audience and help to test out our theories. The questions we can ask are limitless, as are the techniques we can use to answer those questions. There’s always room to learn something new.”

CHRISTINE (MARKETING) is a Bostonian who thought a year without snow might be a nice change of pace. Fresh from an exciting season at the American Repertory Theater in Cambridge, MA, she is looking forward to exploring the similarities and differences of theater on the West Coast. In 2009 Christine graduated with a B.S. in public relations from Syracuse University, where she learned that it can snow in May and became passionate about helping artists fulfill their wildest theatrical dreams by getting great press and putting butts in seats. At A.C.T., Christine is responsible for a variety of projects, including managing all Tales of the City marketing initiatives.

Favorite plays: The Phantom of the Opera (Webber), The Crucible (Miller), Angels in America (Kushner), and Once on This Island (Ahrens).

Why theater? “Theater is, and always has been, an important part of our society. The cast, staff, and crew become a sort of family when working on any storytelling medium, like television and film, but in a theater the audience can, for a few hours, become a part of that family too.” 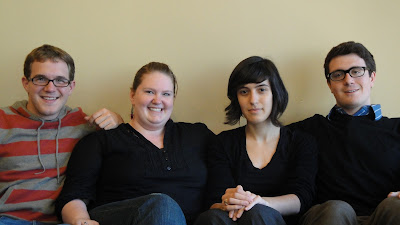