The Process of Devising a Theatrical Piece

Local director Mark Jackson is creating an ensemble-devised piece with students from the A.C.T. Master of Fine Arts Program class of 2010. He writes about his experiences during the workshop that took place in January as part of our First Look program. 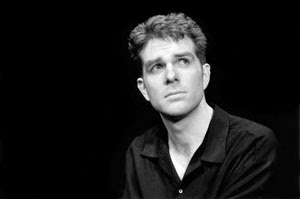 I’ve just completed a week of work with the third-year students of the Master of Fine Arts Program at A.C.T. I’d worked with them for two days back in December to get to know them and identify a subject for the piece we are to devise together in April. Unsurprisingly for a group of young actors on the verge of graduating from an M.F.A. program, conflicting thoughts about transition, change, and fame were foremost on their minds. This triad will comprise the subject of our piece.

Picking up the process again in January, we explored our subject further through a combination of activities. We played games emphasizing rhythm in movement and language and analyzed the dramaturgy of our experiences with the games. What are the rules of the game? How do we play them well? How do we play them poorly? A performance is like any sport. The rules don’t change from game to game. But some games are exciting, and some not. Why?

We brought in objects that served as metaphors for our subject. One of the actors held up a wool cap and said, “This is change. It’s reversible. I wanted this change because a woman wanted it.” He then held up a guitar pick and said, “This is fame. It’s easy to lose. I have to buy more fame because I keep losing it.” Another actor held up an empty notebook and said, “This is transition. It makes me feel a little wary. It has many pages to be filled.” We noted the connections between the metaphorical objects and their subject that felt most magical and surprising to us. Perhaps these objects will become props in our eventual piece.

I handed them a long list of seemingly unrelated narrative ingredients and gave them 30 minutes to compose two short pieces. One group told the story of a reporter hiding in a graveyard to snap pictures of a presidential candidate whom he knew was coming to visit the graves of two women he’d supposedly killed. The reporter hoped this story would revive his failing career. But when he witnessed the politician dancing tenderly with the ghost of one of the dead women, his compassion was aroused and he opted not to expose the man. The other group told the story of a theater diva who refused to go on because a certain critic had not yet arrived. When her mousy stage manager insisted the show go on, the diva committed suicide. The director coaxed the now very nervous stage manager into the diva’s shoes, and when she stepped out onstage she blossomed into confidence. These characters and situations are seeds for our eventual piece.

I asked the actors to ask three other people four questions: (1) What was a major transition in your life, from what to what? (2) What was a major change in your life? (3) Who is a famous person you admire, and why? (4) Who is a famous person you do not admire, and why? The answers revealed motifs. Transition often involved travel. The difference between the journey of transition and the destination of change was difficult for many people to discern. Obama was often admired. Paris Hilton was often not admired. Interviewees most relished the opportunity to talk about people they do not admire. We combined the experiences and views of these interviewees with the characters we’d developed in order to give the latter more texture.

In these and other ways, we’re digging up a mound of ideas while sorting through our own thoughts and feelings about our subject. In April we’ll devise a short theater piece from the bits of gold that shine out to us from the pile we’ve amassed.

Devising a piece is the most physically, intellectually, and emotionally demanding way to work, I think, because it asks so much of everyone. As performers we must also be playwrights, directors, designers, critics, and audience. The accidents that surprise us in our work are often the most exciting things, and so we must be open to embracing these “mistakes.” It takes bravery and daring to put oneself out there like that. But isn’t that at least one reason why we make theater? To encourage bravery and daring in the world? To say, “Look. I step out onstage. And I don’t die. Even when I fail. We can do this. Life is possible.”
ACTMFAProgram ACTNewWork MarkJackson