Christina Poddubiuk designed the set and costumes for Phèdre at the Stratford Shakespeare Festival and has reconceived the set design for the show at A.C.T. She writes about this rare opportunity to recreate the world of the play.

When as a set and costume designer you have the good fortune to work mostly in classical theater, sooner or later you’re going to get to tackle the same piece more than once. I’ve done two Hamlets, three All’s Well That Ends Wells, and four Much Ados. What almost never happens is to work on the same play in two consecutive productions, and to have the opportunity to reconceive the set design.

Phèdre was designed for the Stratford Shakespeare Festival, where it was performed in an old badminton court that is one of their four theaters, on a 60-foot thrust stage. The scenery was necessarily minimal, due to the surround of the audience. We focused on a long painted ramp, and a sculptural piece set far upstage framing the main entrance. The costumes were decidedly baroque, but the setting was nonrepresentational. The imagery was celestial—we painted the inlaid floor as if it were a reflection of the sky, and the “cloud” upstage, built on a metal armature and covered with steel mesh and a gossamer textile, recalled an elemental force that could have been sea, sky, or stone.

Moving the production to the American Conservatory Theater, we took the opportunity of restaging the play for a completely new setting to explore different possibilities. Now the actors are enveloped in a world we’ve created, instead of embraced by the audience. They enter at times through the house, much as they did in a thrust-type theatre, but they can also inhabit the depths of the world beyond the proscenium. Some of the physical elements of the design have been used in new ways: there is a metal mesh screen, and twisting steel tubing. There’s a painted floor that recreates our original “runway,” but the imagery is new. The pulsing music and the raw emotion, tautly sustained in the text, have been translated almost as body parts—as blood vessels and nerve bundles. They lend themselves to many interpretations. They provide a landscape, a force of nature, a divine intervention, or a tangled thread. My hope, at the same time, was to provide more ways, and more visually powerful ways, of bringing actors into the space. And at the time of this writing, I am very much looking forward to how our lighting designer, Jim Ingalls, will sculpt the space and define moments in the play. 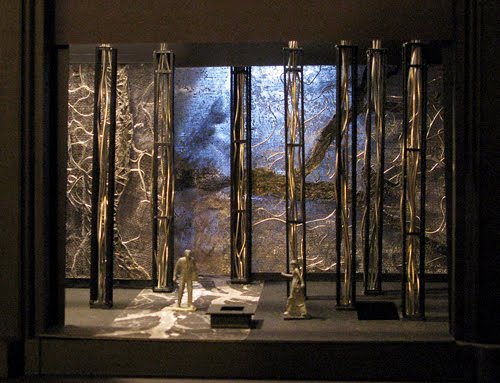