I Dream of Chang and Eng 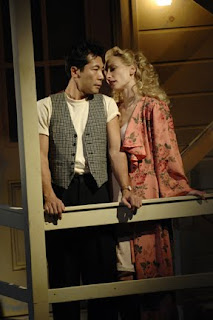 January is new-play development month at A.C.T. Although we continue to work with playwrights on new works throughout the year, First Look heats up this month with a series of readings and workshops. The readings are not open to the public, but you can find more information about this program here.

One of this January’s featured writers, Philip Kan Gotanda (author of the A.C.T.–commissioned hit play After the War) shares his thoughts about playwriting and his new work I Dream of Chang and Eng.

I have this thing where I sit on plays for years before I write them. I can literally feel them inside of me. It’s a kind of amorphous nonspecific locus of knowledge that bumps around inside of me sucking up whatever it deems necessary to building a particular literary house. And it pulls in stuff from every conceivable exchange or encounter, waking or sleeping. My play Ballad of Yachiyo waited around for a good seven years before a night in the hospital keeping company with my convalescing wife cracked something open. (She is fine!) Chang and Eng has broken all records, and I’d frankly abandoned any thoughts about writing it. See, I’ve been trying to write this play about the original Siamese Twins for some 20 years. Yup, 20 years. I have notebooks of research and errant drafts sitting around. But last year while codirecting my play Fist of Roses with UC Berkeley Theater, Dance & Performance Studies students, I began to write in spare moments. I didn’t go back to my notes; I decided to just let it go and not worry about anything that came before. Just let it go.

The title is a bit odd for me: I Dream of Chang and Eng. It intimates me, the writer, appearing in the work. The title came a few years ago and I used it, never thought anything more about it. Then yesterday I began to notice the title. Hmm, perhaps it’s my way of saying this is my version of Chang and Eng’s lives. That is, a telling with more regard paid to my necessary imagination than historical fact. And that is fine by me. I’m telling a story, my story, and I openly state that. And in fact, despite the fact that there is a wealth of literature out there regarding Chang and Eng, there is very little firsthand information, only a few letters and shopping lists of items for the farms. Almost all that you read is taken from reportage, secondary sources, and speculation. As far as authentic voice, from their primary point of view? Almost nil. All else is gleaned from other people’s versions of who they were. So I imagine them. I dream them.
ACTNewWork AfterTheWar IDreamOfChangAndEng PhilipKanGotanda