Claire Lautier plays Aricie in Phèdre, a new translation of Racine’s 17th-century French tragedy directed by A.C.T. Artistic Director Carey Perloff in a coproduction between A.C.T. and the Stratford Shakespeare Festival in Ontario, Canada. Presented at Stratford last summer, Phèdre arrives at the American Conservatory Theater in January. Lautier will travel to San Francisco along with many members of the original cast to revisit Racine’s classic drama at A.C.T. 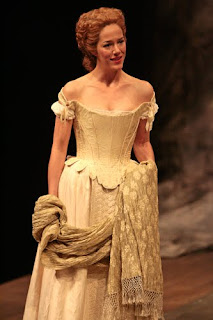 As I write this, I’m sitting in a public place in the midst of squawking televisions, ringtones, a dozen cell phone conversations, background music, loudspeaker announcements, engines and horns, beeps and chirps, fluorescent lights, flashing screens, diesel fumes, and the rhythmic bouncing of my seat as the person down the bench from me jiggles his legs frantically while listening to an iPod and playing a video game. And I think to myself, I should write that blog entry for Phèdre. What should I talk about? I’ve never written a blog entry of any kind before (what would I say and who would care?). In this environment I draw an even bigger blank—my surroundings seem pretty incongruous with ideas about French court drama!

After a month in New York City, I’m pretty worn out from sleep deprivation. Somehow I managed to live here for 17 years without being overly affected by it, but after nine months in beautiful, blissful, and quiet Stratford, coming back to the city has been a rude awakening and I feel as if my nervous system is screaming for peace. So I’m REALLY looking forward to being at A.C.T., in San Francisco, a city I’ve only briefly visited. But mostly, I’m looking forward to sinking into the world I remember from this summer, which is Phèdre. It’s not that often you get to reexamine a piece a few months after a run, and in a radically different setting. During the summer, it felt like we barely scratched the surface; by the time I began to feel grounded, the run was over. In Stratford, we played on a rep schedule, so although we usually did eight performances a week, we were doing two or even three different plays in that week. It was usually several days between performances of Phèdre, which can be either refreshing or disorienting. I found it a real challenge to get underneath the material and stay there. I liken it to dropping anchor in a deep ocean, going to sleep, and waking up the next morning to find you’ve drifted off course somehow with your anchor trailing.

As I relive the play in my mind I have a full-body experience in direct contrast to my environment. My memories are of stillness: listening, breathing, light reflected by the water in the fountain, a bare stage. The words are spare and dangerous; they emerge from an ominous silence, reaching through the long expanse of space. We can only perceive silence because of sound; when we do, we notice that underneath the sound and ever present is the deep, deep silence and stillness. What finally emerges from that silence, from the primordial depths of our psyches, long suppressed, is what sets the events of the play in motion, inexorably, until there is only one possible outcome. I want to drop back into that kinetic stillness, that pure potential. I find that stimulating and profoundly satisfying—and a refreshing antidote to the modern world of pervasive, meaningless noise.

So I’m excited! I get to work at A.C.T.! I’m looking forward to reuniting with Carey and our cast and creative team, meeting the new cast members, and seeing what happens when we go from a long thrust stage to a proscenium. How will we do it? How will it affect the play? How will Aricie be influenced by it? In Stratford, the audience was so close and surrounded us; at A.C.T they’ll be “out there” and we’ll be “up here.” It’s the same play, but it won’t be the same play. It will be totally new!
ClaireLautier GearyTheater Phèdre Racine