Holding Back My Tears as a "Carol Mom"

Each year, A.C.T.’s annual production of A Christmas Carol features almost two dozen young actors as young as eight, who are all students in A.C.T.’s acclaimed Young Conservatory. Susan Berston, whose 12-year-old son, Samuel, appears as Ned Cratchit in this year’s production, writes about the rewards and challenges of being a first-time “Carol mom.”

Hearing the joy in my son’s voice, listening to him sing Christmas carols in early November, and noticing a pronounced bounce in his step, I have pondered whether being a “Carol mom” is almost as exciting as being in his shoes. My son, Samuel, has always loved to act both “on- and offstage” since the age of four, but it wasn’t until a year ago in Betty Schneider’s musical theater class in A.C.T.’s Young Conservatory that he realized there were other more serious, like-minded “singing, dancing, and acting” kids like himself. Ms. Schneider is a talented vocal and acting coach, with a magic and gentle influence unparalleled by other teachers my son has experienced. She is one of those teachers who have made a difference, and an integral part of his journey to bring him to the stage of A Christmas Carol as Ned Cratchit. This brings me to write this blog to share with you—the Carol experience from a parent’s perspective.

I soon became immersed in learning new jargon in order to understand where and when my son was to be for rehearsals. A “callback” meant a “second interview.” To “read” translated to reciting lines for a given role during an audition. And my son was “cast” in the production—based upon factors we could only randomly guess during the surprisingly warm and friendly audition process. The nightly emails with the following day’s schedule took some decoding, with the assistance of a dedicated and detailed “veteran” parent, Lisa Share-Sapolsky. In layperson’s terms, she provided more detail to terms like “straight six,” “release times,” and “break coverage.” At the parents’ meeting, I was embarrassingly overwhelmed with the volume of information disseminated and number of names to remember. Despite information overload, I felt the bond between the parents, who strongly realize the immense value this experience holds for each of our children.

Even with uncertainty around daily schedules and planning, shuttling back and forth, and some missed school, I knew the growth experience, confidence building, and actor training (more like boot camp) would be unparalleled. As a parent, and for full disclosure, of an only child, I’ve pretty much followed and encouraged my son’s passions—and whether he was “cast” or not, I sensed the audition experience, while a little scary for him, would be a learning one at that. An experience, regardless of role, with a multigenerational cast would help my son respect the choice of those who have chosen acting as a career. Developing relationships, camaraderie, and friendships with an immensely creative, focused, fun-loving, and extremely bright bunch of new kids has proven to be invaluable. Samuel has been exposed to the professional world of theater and the opportunity to be mentored by one very vivacious, sensitive, and extremely talented actor and M.F.A. student, David Jacobs.

As opening night approaches, I’ll bet you that Ned Cratchit’s mom will most likely be holding back her tears as she sees her son realizing his dream on the A.C.T. stage, knowing that his experience will transcend as a source of growth and inspiration offstage for many years to come. 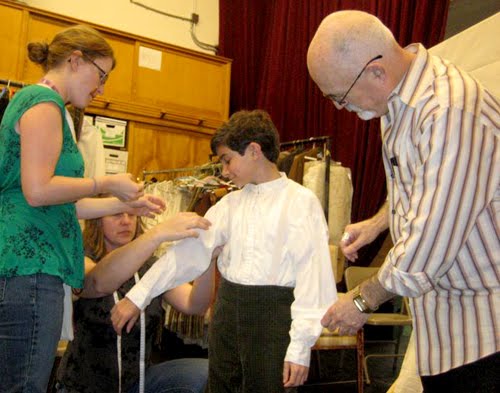