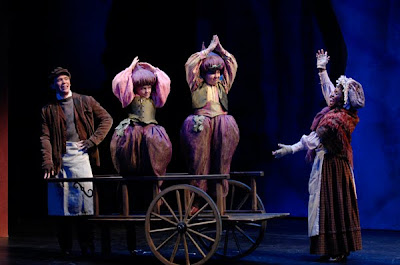 Two Turkish figs (Isabella Ateshian and Rachel Share-Sapolsky)
in the 2007 production of A Christmas Carol.

“Too big to be a fig. Maybe an onion though,” says veteran A.C.T. Casting Director Meryl Shaw.
“Or even a plum?” offers A Christmas Carol Casting Consultant Greg Hubbard.

From outside the door of the casting office, I wondered what mystery fruit my two bosses could be discussing. Surely something exotic.

“Hey, Shelley, could you come help us with this produce?” Meryl called.

Expecting to see them peering over a small tropical fruit, I was surprised to see them huddled around the picture of a small adorable child. As the new artistic intern at A.C.T., I’ll admit there is a lot of casting terminology for me to learn, but I was highly perplexed by their farmers’ market vocabulary.

“It’s just that we have a zillion onions. I’m tearing up all ready,” says Meryl.

I furrow my brow and nod, playing along. Very pale and onionlike, I agree. Seeing my obvious confusion Meryl explained what anyone who has seen A.C.T.’s A Christmas Carol will all ready know:
the Ghost of Christmas Present reveals to Scrooge the “sensory delights of the holiday season” by showing him a delectable array of Spanish onions, Turkish figs, and French plums—all portrayed by students in A.C.T.’s Young Conservatory.

Cut to September 9, the day after initial A Christmas Carol auditions, when, after weeks upon weeks of preparation, Carol director Domenique Lozano, Meryl, Greg, and I find ourselves in the midst of a veritable fruit basket of auditionees.

I was astounded at the amount of, ahem, “raw” talent and professionalism exhibited by these young actors. In all seriousness, though, the kids showed an incredibly high degree of focus, commitment, and energy. We were all surprised at the skill level of these young actors, who brought in audition pieces as varied as Shakespeare, Oscar Wilde, and the Beatles. Seeing a young actor tackle the middle-aged and imposing Paulina from The Winter’s Tale with such mastery over speech and language was very impressive, to say the least. One of the more delicious highlights of the evening included a rendition of ye olde YouTube classic, “Banana Phone.” It was work you could really sink your teeth into. Meryl regaled us with favorite stories from previous auditions, such as last year’s Ilya (who played Boy Dick in 2008) performing both Gwendolyn and Cecily in a scene from The Importance of Being Earnest.

There are so many difficult factors that go into casting a show, like older actors who are a wee bit too “ripe,” or younger ones who might still be too “green.” Mentally, I found myself trying to keep up with Meryl and Greg’s observations, “Yes, yes. His portrayal of the onion has . . . many . . . layers?” I think. The acting work seems so . . . organic. Finally, after a marathon 14 hours of auditions, we decided we’d had enough of speaking “fig-uratively” because we were all, indeed, plum tired.
AChristmasCarol CharlesDickens GearyTheater ShelleyCarter