I miss the seasons in San Francisco. Growing up in the Midwest and then living for over two decades in New York City, the seasons were markers of time: a return to either school or work accompanied by falling leaves in autumn; holidays marked by singing and an abundance of lights and genuine good cheer all over the city, followed by what seemed like endless cold and snow in the winter that made arriving at one’s final destination all the more rewarding; warmth and greenery in the spring; hot days and long vacations in the summer. Each season heralded something both new and familiar. You could count on these things; there was comfort in the cyclical nature of the world and in the annual rituals we create to mark them.

As far as I can tell, there are no seasons in San Francisco. People tell me that they exist, but I don’t believe them, unless fog is a season, in which case there’s one. Eight leaves on the ground in front of my building? Oh, fall has arrived. Two hot days (meaning over 75 degrees) in a row? It’s summer. Unless it’s late September. Or October. It all runs together.

And so in November it’s a great pleasure to go upstairs to the William Ball Rehearsal Studio and see 40 people at work on our fifth annual go-round of Carey Perloff’s and Paul Walsh’s A Christmas Carol. This annual ritual says winter to me, although this year, the season will have barely begun when the last chorus of “Look Up!” fades away into the American Conservatory Theater’s dome at about 7:30 p.m. on December 27. It’s not just that the story takes place at the winter solstice (do we have that out here?), or that Dickens’s story embodies what’s coldest and warmest about the season. It’s the ritual that we at A.C.T. enact each year, when our core acting company mentors our third-year M.F.A. students, each of whom has a role, while they, in turn, mentor the many cast members who train in our Young Conservatory. The ritual has a new twist this year: more of the core company is appearing in the show than ever, as René Augesen and Gregory Wallace join the cast as the Cratchits, mère and père, alongside Jack Willis as the Ghost of Jacob Marley. Steven Anthony Jones will be pitching in at certain performances, as well. And other adult members of our cast are back, as regular as a snowless San Francisco December: James Carpenter as Scrooge, Sharon Lockwood as Mrs. Dilber and Mrs. Fezziwig, Jarion Monroe as Mr. Fezziwig, and BW Gonzalez as the Ghost of Christmas Present.

Just as each winter is different from the last but still winter, each year’s Christmas Carol is both familiar and new. The story’s the same, and while the lines come one after another in a reassuringly recognizable way, the third-year M.F.A. students who say many of them are new—and yet familiar to those of us who have taught them for the last two years. Watching them rehearse the party scene at the home of Scrooge’s nephew, Fred, on Christmas Day, the outlines of the scene are the same as always—young, exuberant people living fully in their enjoyment of each other and the season—but the details are fresh, invented anew, moment by moment, by this young cast and our director, Domenique Lozano.

By the end of the rehearsal, although I’ve heard the ending of the “Yes and No” game more times than I can count over the years, I’m as delighted as if it’s brand new—which it is—and cozily familiar—which it also is. Which is what a holiday ritual should be. 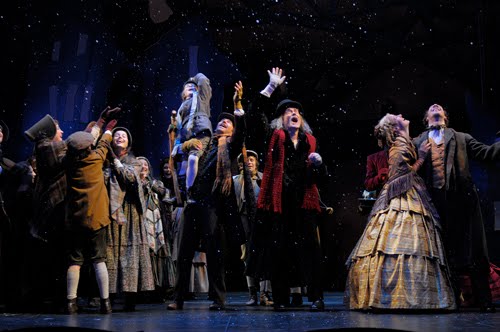