Who Wants to Be a Psychoanalyst? 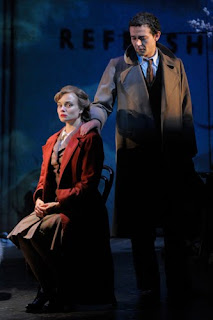 The fifth season of the wildly successful Theater on the Couch program at A.C.T. started off running after the performance of Brief Encounter on Friday, September 18. Dr. Linda Lagemann and Dr. Wendy Stern of the San Francisco Center for Psychoanalysis were the panelists. Cast member Joseph Alessi joined in and brought many insights into the characters he portrays.

In this production, boundaries were broken. As cast members appeared in the audience and live characters entered movie scenes, the production created in us the feelings that the two protagonists, Laura and Alec, have as they breach boundaries. Fantasy and reality were also blended—aspects of the play were structured like a dream. The visual images projected on the back wall and the music expressed the unconscious feelings of the characters bubbling up. A perfect vehicle for a lively discussion!

From a psychoanalytic standpoint, Brief Encounter posed the common dilemma of any era: how does one have more than just a brief encounter with the passions of life? Other themes that came up during the discussion were loss, limitations of reality, integration of suppressed feelings and split-off aspects of the self, impossible love, and suppression of life dreams.

To make the event truly interactive, and since vignettes from the play can be analyzed like a dream, the panelists stimulated discussion by playing “Who Wants to Be a Psychoanalyst?” with the attendees.

You, too, can play along with these questions, but don’t let the answers provided limit your thinking:

Question 1. A patient tells you, “I had this dream: it was in my living room, but it was like in a black-and-white movie, and there were two empty chairs in the room.” What hypothesis do you have?

A. The dream reveals your patient secretly wants to apply to be on the reality show Extreme Makeover: Home Edition.
B. A couple of vibrant throw pillows would really punch up the look and take this room from drab to fab.
C. Clearly this dream image represents two people having wild sex.
D. Neither your patient nor her husband is really “present” at home. They each have so much of their self repressed or split off that all that is left in the marriage is dull and colorless. Their marriage is static, not alive.

Question 2. A patient tells you, “I had a dream I had something in my eye: I couldn’t see clearly and I was in pain. Then this man helped me.” What does it mean?

A. The dream is a premonition of an impending eye injury.
B. Through complex unconscious symbolism, the dream is communicating that your patient has something in her eye, is in pain, and needs to see an optometrist.
C. Your patient has not been able to see the barren state of her life and marriage. The pain of her life has become unbearable. This is triggered by the encounter with the man.
D. Not enough information to know.

(This is a trick question. While answer “C” is compelling and is a theory that could fit, “D” is the correct answer and serves as a reminder to all psychoanalysts, official and honorary, that while we may have knowledge of how the unconscious works, it is only in a collaborative process with the patient and their associations that meaning is uncovered.)

Question 3. A patient tells you, “I had a dream I was at a train station, Milford Junction, talking to a man I met about a time when I was more alive and adventurous. Then a powerful wave swept over us.”
What hypothesis do you have?


A. Your patient should avoid the train station today as there will be a tsunami.
B. She has unresolved feelings from age 5 about her first “boyfriend”, named Milford, who loved Thomas the Train more than her.
C. Her unconscious mind is telling her that she needs to wake up and go pee.
D. She is at a junction in her life. Big emotions, long repressed, are sweeping over her like a force of nature.

Our regular “Couch” groupies tell us that these sessions are enlightening and entertaining and that they gain a much deeper understanding and appreciation of the show they have just seen.

We hope you will join us for these upcoming Theater on the Couch discussions: