The Reality of Theater 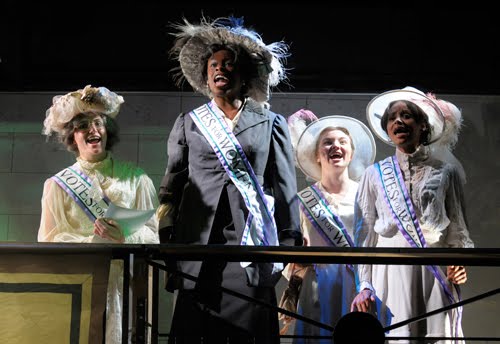 One night last month, Thursday, October 17, San Francisco was marking just another night of theater being performed on stages throughout the city and the Bay Area.

On that night the American Conservatory Theater was in an extended run of full houses for the Kneehigh Theatre production of Noël Coward’s Brief Encounter. This fusion piece set in England during World War II told us of unfulfilled love and escape in a tumultuous time. Next door at the Curran Theatre, the touring company of Rent, with Anthony Rapp (original Mark) and Adam Pascal (original Roger), was sold out, with a raucous crowd watching the La Bohème story, told through Jonathon Larson’s characters, about poor, HIV/AIDS–infected, starving artists in New York City. They sang of the hope of dying in dignity with others caring about their plight. Across town another sold-out war-themed show was turning away people who wanted to see the Lincoln Center production of South Pacific—another love story, set in the islands of the South Pacific with war raging all around them. On the other side of the Bay, Berkeley Rep was extended with standing-room-only audiences eager to see the rock opera American Idiot. Green Day’s musical rant against war, government oppression, big-government mismanagement, and societal pressures caught fire and enraptured the audience for 90 minutes of nonstop push. Back in San Francisco, the A.C.T. Master of Fine Arts Program students, under the direction of Jonathan Moscone, artistic director of Cal Shakes, were presenting Rebecca Lenkiewicz’s play Her Naked Skin, about women’s rights and the struggle for suffrage in turn-of-the-century Britain. This play was the first by a woman playwright to be presented on the National Theatre’s Olivier Stage in London. This moving work reminded us that human rights advancement is a contemporary issue and we still have a long way to go until all are treated equally. Another National Theatre production was in town that night, as well. There was a simulcast screening of their All’s Well That Ends Well at the Sundance Kabuki film theater. On top of all of the live theater in town that night, a few hundred people were taking in Shakespeare through the cinema screen, in an effort by the National to build better relations with the American audience.

I know I have missed at least another half dozen to a dozen other plays that were running on that night, as well. There is always much theater in our town on any given night.

But on that night the theater became reality as at the same time that curtains were rising across the Bay Area, just over in Union Square, at the St. Francis Hotel, the first sitting U.S. president to visit San Francisco in nearly a decade was speaking live. President Obama turned out thousands of supporters to hear him update them on the issues of our time, issues that were all around him that night in the theaters of the Bay Area: war, health care, human rights, the social-class divide, international relations, the economy in the context of the financial crisis, and government’s role in all of this. President Obama didn’t need to look much further than the scripts and librettos of the theaters around him that night to find relevant substance for his speeches.

We go to the theater to suspend our disbelief and to experience the stories of others so we connect and feel. We use the theater to wrestle with the issues that are our own. We sometimes find what is true reality being no further away than just on the stage before us.

On this one night in San Francisco in October of 2009, the theater was as real as it gets.